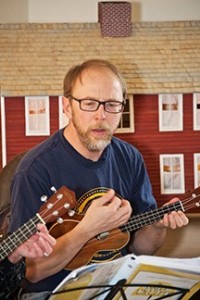 Rich Higdon, founder of The Ukulele Society of Door County, during a recent gathering of uke players.

Since the summer of 2013, ukulele players of all types and talents have come together every few weeks to enjoy the camaraderie of their fellow uke players while working on advancing their own skills as part of The Ukulele Society of Door County.

As more people came to shows and saw how the Gazebo Guys maintained focus on the ukulele through its old-time blues sets, interest in getting involved skyrocketed. Higdon himself has played ukulele for the past 10 years through his involvement with Sheboygan-based band The Water Street Hot Shots.

The society’s first meeting was set for June of last year. Higdon recalls that first gathering, which took place while American Folklore Theatre was in rehearsal. Soon enough, a whole section of the cast from AFT showed up to sing and the first meeting of The Ukulele Society of Door County was underway with 35 to 40 people.

That first summer, a majority of people came to the gatherings to sing along. Today, that isn’t so much the case as interest in the ukulele has continued to grow.

“People love to make music and sing, or just sit and play. Guitar is relatively easy to play basic, but ukulele’s easier – it’s only four strings,” Higdon said. “The strings are plastic, they’re soft; they’re not like guitar steel strings. You can play one chord with one finger and build from there. It’s really accessible, they’re cheap. And it’s really hip right now. Ukulele clubs are springing up all over.”

A recent gathering of The Ukulele Society of Door County.

Any given meeting welcomes upwards of 20 individuals of all abilities, from beginners to advanced beginners and a few of what Higdon calls “expert amateurs.” In particular, two individuals who take an annual trip to Hawaii and while there, enjoy ukulele lessons on the island where the instrument originated in the 19th century.

It is a pretty relaxed setting – players show up, someone yells out a page number from The Daily Ukulele: 365 Songs for Better Living songbook, and the strumming of plastic strings and singing voices fills the room. The songbook includes pieces by Johnny Cash, The Beatles, and other old pop tunes that translate well to the four-stringed instrument.

The Ukulele Society isn’t a performance group, but more of a hangout group. “Come as you are and when you wish” seems to be the basic motto of this group.

“The group has just kind of worked as casual as it is,” Higdon said. “Really it’s just an open forum. Anybody who wants to come can come.”