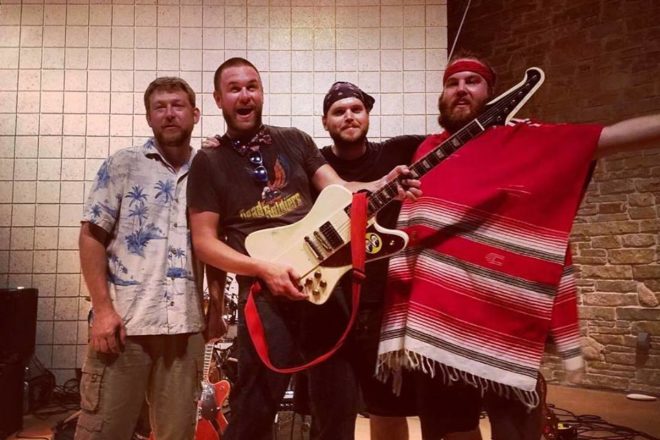 If you spend any time in Sister Bay, there’s a good chance you know who Frank Maloney is. Maybe you know him from serving food at Roots Inn & Kitchen, running open mics at The Garage at Husby’s or as the bearded guy with a White Claw in his hand.

But perhaps you know him best from his band, Frank Maloney & His Big Country Unit, which performs frequently at The Garage and the Sister Bay Bowl. These band members have a lot of country energy. Whether they’re singing about booze, gambling and women, or delivering steely vocals and “steaming-hot licks,” they emanate the grittiness of country through both originals and covers.

Maloney formed the group about two years ago, enlisting the talents of Adam Haste on lead guitar, cousin Tony Wiltgen on keys, Dan Smrz on drums and Tony Menzer on bass.

But it really started on the south side of Chicago, with Maloney writing songs as a 12-year-old and playing fake guitar in the mirror. Later he taught himself to play real guitar with the help of friends and the internet. Wiltgen taught him his first four guitar chords. By 14, Maloney was taking drum lessons, too, and he was playing in bars at 15.

“I never remember wanting to do anything else from when I was a little kid,” he said.

But the music scene in Chicago was big. Not yet confident in his guitar skills, he decided to become a drummer first, his theory being that everyone needs a drummer. He played in a couple of bands, one of which was with Wiltgen.

Maloney also started a few punk and emo bands along the way. In college, he played in an indie-rock band called Roses and Sake that did fairly well, he said, and still has a bunch of old T-shirts and posters from those days.

Wiltgen also served as Maloney’s connection to Door County. They had come up to the peninsula numerous times to visit Wiltgen’s family in Green Bay – folks who had been coming to Door County for forever. Maloney made a visit permanent in 2009 after dropping out of college and getting a job at Wilson’s.

He eventually met Smrz, and a couple years ago, texted him about starting a band. They decided it would be a good idea to go to the open mics in Sturgeon Bay, where they met Haste at Butch’s Bar and Menzer at Beach Harbor Resort.

Now Frank Maloney & His Big Country Unit performs a few times every month, playing its version of country music and fusing it with the punk-rock influence Maloney grew up with.

When composing originals, he typically writes more comfortably by himself, then takes the skeleton of a song to the band, whose members add their own flair.

“It’s mostly stuff I write because I sit in bars and notice people,” Maloney said.

The band’s original content is still a work in progress because things constantly evolve on stage and will continue to do so until the group does some solid recordings in the studio. It has a record halfway done at the moment, but people are busy.

“Everybody in my band is in at least one other band,” Maloney said.

Haste has his own group, The Adam Haste Band, in which Smrz also plays. Menzer plays in Cathy Grier’s band and is involved in other projects at Milwaukee’s Summerfest. Wiltgen is in another group called Crossing Paths, and Maloney and Wiltgen also play acoustically at the Boathouse on the Bay on Tuesday nights. And they all have day jobs, too.

For now, the Unit is happy to split its time between the Sister Bay Bowl and The Garage, which have become home bases for them. Maloney said it’s been great to have the community recognize the group’s name and to support its work – and it makes him want to start making merch and get into the studio even faster. And there’s a ton of material lined up.