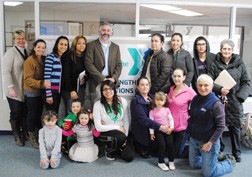 Center Executive Director Drew Richmond and certified ELL Instructor Renee Honold-Smith celebrated the success of their first session of the ELL program with a party on April 23rd.

A suspected gas leak would give most anyone in Door County a reason to panic, but for non-native English speaker Rosario Bueno Parsons, the situation could have been much worse had she not practiced 911 calls in her English Language Learner (ELL) class at the Door County YMCA.

“If I hadn’t practiced, I wouldn’t know what to do or what to say in that situation,” said Bueno Parsons who moved to the United States about a year and a half ago. Those emergency situations are just one aspect of life that have become easier since her ability to communicate in English has improved.

“I no longer need to rely on my husband to help me communicate at the doctor’s office, the store, or in an emergency,” said Bueno Parsons. “When you know the language, you often take for granted the ability to communicate in those types of situations.”

Bueno Parsons is one of 35 participants in the ELL program that was launched at the Northern Door Program Center in October of 2013, and she also assists certified ELL instructor Renee Honold-Smith in teaching the English and Spanish classes.

This program helps the Y fulfill its focus on social responsibility.

“We saw the need to help break down the language barriers that exist in the community,” said Drew Richmond, executive director of the Door County YMCA’s Northern Door Program Center. Richmond attributes the program’s early success to competent instructors, consistent classroom space, and onsite childcare for those who need it in order to participate in class.

The beginner Spanish class will continue through the spring and summer on Wednesday afternoons from 1 to 3 pm as a paid program, and free beginner and advanced English classes will resume again at the end of October 2014. The goal is to expand to the program to Sturgeon Bay in the fall. For more information, contact Richmond at 920.868.3660 or [email protected].