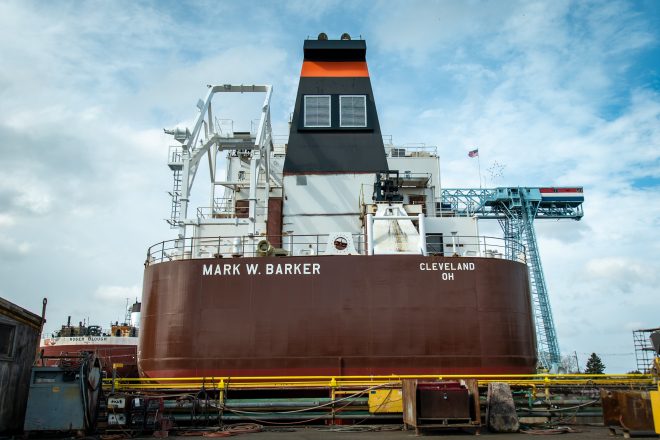 “This is a huge milestone for all of us to be able to put the boat in the water for the first time,” said the vessel’s namesake, Mark Barker, president of Interlake Steamship, which commissioned and owns the ship.

The 639-foot-long, 75-foot-wide bulk freighter received full maritime honors Oct. 28, including a large crowd, speeches and the crack of a ceremonial bottle of champagne against the bow of the ship above the vessel’s nameplate.

“Motor Vessel Mark W. Barker, your family name is strong; you are built strong by hard-working men and women; and you will work strong. May God bless you and all who sail with you,” said Helen Sharp before crashing the bottle of champagne. Sharp is the wife of Ian Sharp, Interlake’s director of fleet projects, who spearheaded the design of the new ship.

Tugs in the shipyard blew congratulatory salutes as the water flowed into the dry dock to float or “launch” the boat, a process that would take about six hours. The christening of the vessel, another maritime tradition, will take place in June 2022 in Cleveland, home of the ship’s owner, Interlake Steamship, the largest privately held shipping company on the Great Lakes.

“It’s pretty humbling,” Barker said about having the ship named for him, an honor he said was bestowed by his father, James R. Barker, Interlake’s chair. “I was not looking for it. I’ve not quite absorbed it all yet. It’s pretty special.”

“We operate in fresh water, so our ships are long lasting; they’re long lived,” Barker said. “We’ve done an immense amount of work to bring our boats up to modern standards, the ones that are pre-existing. We do maintenance here every year to renew steel and upgrade systems so they last a long time. But we had an opportunity with a customer to look for the future, and that included a new ship.”

Barker didn’t divulge any hard numbers about the cost of the ship, saying only that “it’s an expensive boat. We’re thrilled to partner with a yard that gave us a great vessel for a great value.”

The ship will ply Great Lakes waters, transporting raw materials such as road salt, iron ore, stone, sand and gypsum to manufacturers. But the ship’s unique cargo hold – a large square rather than the traditional V-shaped vessel – has been designed with the future in mind. That includes the transport of non-free-flowing bulk material such as wind-turbine blades.

“We went with a large, square hold to get more cubic and carry more tons per trip to lower our environmental impact, as well as carry some unique cargo,” Barker said.

Interlake and Fincantieri signed the contract for the river-class, self-unloading bulk freighter in April 2019. They laid keel – the formal recognition of the start of a ship’s construction – in June 2020, with the majority of the ship built in Sturgeon Bay.

The carrier traffic and congested supply chains that continue to make headlines pertain largely to ocean ports carrying import and export freight in large containers. Lakers are capable of moving containers, and Barker said there is some talk of it, but Great Lakes vessels traditionally transport bulk cargo that is not packed in containers.

“I think the Great Lakes are in a place to be positioned to help relieve that [congestion] and bring the supply chain right to the Midwest, but that’s not our business,” Barker said. “Our core business is supplying the steel mills, the aggregate business, the cement businesses in the Great Lakes.”

The Mark W. Barker is adding capacity and not replacing any of the other nine lakers currently in Interlake’s fleet. Steel demand is strong, the aggregate business continues to grow and demand will increase for the carbon-efficient form of waterborne transportation.

“The Great Lakes marine highway is a fairly underutilized system,” he said. “It’s immense what we could do on the Great Lakes by water. Trains and highways were built, and so it came off the water. Now I think as we see our highways get congested and people focus on how to lower emissions and take trucks off roads, there’s a new focus back to the water, and we’re very excited about that as a company.”

Although the public launch is a way to celebrate and bless the new ship and its crew for good fortune during future voyages, it’s really all about honoring the men and women who have built the boat, Thayse said.

“It’s hundreds and hundreds of thousands of man hours that have produced the product you’re about to see during the launching process,” he said.

James Barker dedicated the launch event to those men and women.

“We honor all of the skilled professionals who have worked countless hours, day in and day out, year after year, behind the scenes constructing these tremendous bulk carriers,” he said. “Their workmanship and talent are welded into every seam of these vessels that go to sail long, productive lives on the Lakes, safely carrying mariners and the raw materials that are the building blocks of America.”

The ship also carries in its welds and seams what Mark Barker called a “great story” about American industry.

“It’s Minnesota iron ore that was delivered by Great Lake ships like this one here to Burns Harbor, Indiana, which was made into plate steel and brought back here to make a ship to do it again,” Barker said.

The ship is expected to be sailing by spring 2022. During the winter, interior work will be finished before the testing program begins and the crew is trained in anticipation of the first voyage.