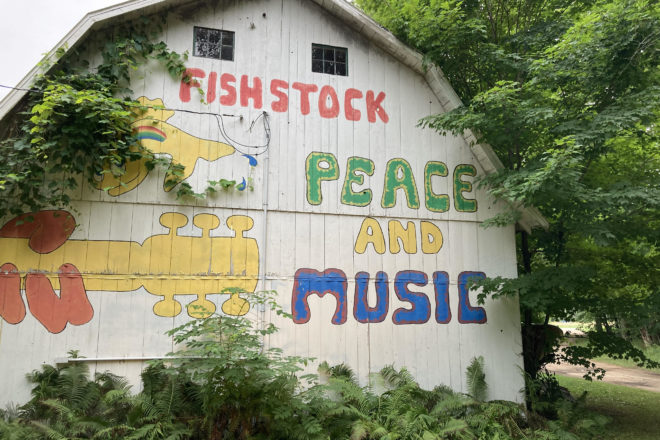 Fishstock logo on the back of the barn. Photo by Sam Watson.

If you’re familiar with Fishstock – the annual concert series held in a repurposed dairy barn – it shouldn’t come as a surprise to learn that it started out as a party. Homemade admission buttons, sold for $5, helped to cover the cost of food, beer and music: a winning combination that drew crowds of up to 1,500 people.

It also drew the irritation of neighbors and the police.

“It got a little out of hand, a little too crazy,” said Fishstock organizer and sound technician Steve Ellman.

Some 40 years later, Fishstock has grown out of its party days, but with the help of high-spirited bands such as the Chicago-based folk trio Sons of the Never Wrong, it still knows how to show audiences a good time.

Because of health department regulations, Fishstock no longer offers alcohol, but attendees may tailgate in the large, grassy field on the farm before the show. Then they can head to an outdoor seating area where opening acts play before finding their seats among rows of mismatched chairs in the barn.

The barn is about a century old, but it doesn’t look its age because it’s been remodeled to seat 300 people in front of its open-air stage and 150 in its acoustic hayloft area throughout the past 26 years of official Fishstock concert hosting. Outside, there’s room for another 300 people to watch the show projected on the barn’s wall.

From his perch in the hayloft, Ellman controls the sound system – gradually assembled in a DIY fashion through the years, but “state-of-the-art,” according to Ellman – while he watches every show he books.

That DIY attitude is a common theme at Fishstock. From sound to lighting to ticket taking, everything at Fishstock is done by Ellman and a small group of family and friends.

Thanks to that group, Fishstock has come a long way since its wild start during the 1980s, but remnants of it remain. Scattered throughout the venue are relics of Fishstock’s past: among them, old pictures covering a barn wall and the huge, hand-painted mural celebrating “Peace and Music” on the back of the building.

On this particular evening, the air buzzed with conversation as concertgoers found their seats, but then all fell silent as Ellman introduced the Sons of the Never Wrong, saying, “They’ll be your best friends once the show’s over.”

It was no empty promise. Between songs, the Sons let the audience get to know them by cracking jokes, telling stories about their childhoods and delivering playful jabs at each other. Though they went on tangents between songs – did you know that when you hear cicadas chirping, you’re usually hearing three different subspecies? – the band was all business when they started playing.

The Sons’ folksy, spirited sound incorporated banjo, acoustic guitar, piano and bongo drum as a backdrop for polished, three-part harmonies, which went from animated to hauntingly discordant, sometimes in the same song.

Often preceding a stripped-down, melancholy ballad with an energetic, stomp-and-holler anthem, the Sons kept the audience guessing. But no matter which song they played, the twang of the banjo and the expert rasp of the singers’ vocals seemed right at home in the rustic, open-air barn.

Deborah Lader, the Sons’ singer/guitarist/pianist/banjoist, agreed. According to her, some of the band’s favorite gigs have been set in venues like Fishstock.

“You don’t always know what you’re gonna get when you walk into a barn for a show,” Lader said during a postconcert interview. But the band was impressed by Fishstock’s lighting and sound setup, as well as the Ellman family’s rugged, do-it-yourself attitude when it comes to performance.

Independently organizing concerts with just the help of a few family members and friends is no easy task, so “clearly, it’s a labor of love,” Lader said during the show.

Although this was the Sons’ debut at Fishstock, they’ve played at venues such as the Door County Fire Company in 2016 and Woodwalk Gallery in 2018.

Although the Sons and several other Fishstock performers play folk, that’s not the only sound filling the barn this summer. A lifelong musician himself, Ellman is selective when it comes to quality, but he’s open to just about any genre when it comes to booking artists.

“I don’t have a favorite genre,” he said. “I like bands who are good musicians, who can relate to the audience and who make people go away happier than they came. If they do that, I like them.”

As Fishstock ages, Ellman has plans to ensure that it will continue to age well. One of those plans involves a new, $20,000 LED lighting system, which will save money and be more environmentally friendly. And by the time that new lighting system is up and running, those lights might be shining on Sons of the Never Wrong for a second time.

“We hope to come back next year, if Steve will have us,” Lader said.

Purchase tickets ($20 for general admission and $25 for reserved seating) in advance at doorcountytickets.com, or after 5:30 pm on the day of a concert (cash and check only) at the Fishstock box office, 3127 Cty F in Fish Creek.