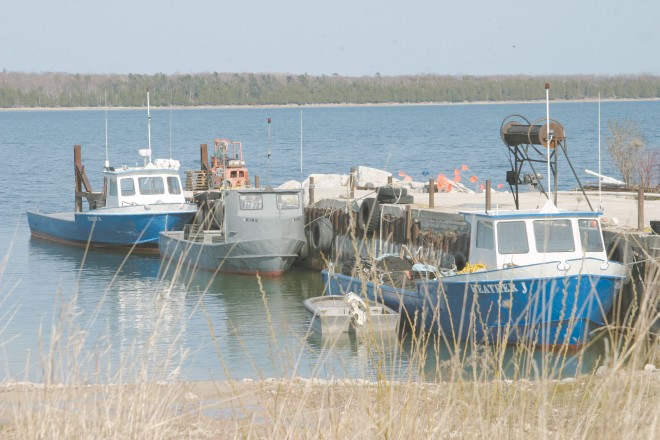 Those families with a long history of fishing are known well on the peninsula. Names like Teskie, Weborg, Hickey, Henriksen, Saunders, Johnson, and a number of others have kept the commercial fishing business alive through the many fickle seasons such a lifestyle brings. Door County commercial fisheries now ship whitefish and chubs to markets in Chicago, New York, and even Canada.

The sign in the Hickey Brother’s fish market says, “To chub or not to chub, it’s not easy being a captain.” Dennis and Jeff Hickey of Baileys Harbor, two of four brothers in the family – all of whom served in the navy – put their boats into Lake Michigan as soon as the ice cleared this year. “We’re really a wholesaler,” Dennis said, but they do sell fish off the boat and over the modest counter at their warehouse in Baileys Harbor. “We feel people should have access to fresh fish – lots of people come here because of word of mouth,” Dennis said. “They know if they call after 1:00 or 2:00 after the boats are in, we’ll have time to process some fish.”

The Hickey brothers ship fish all over the United States. “We have a wholesale buyer that works out of here – he’ll call us right on the boat, and also fills orders for restaurants in the county.” Dennis said, “We catch whitefish and chubs, we can’t take lake trout.” Dennis said, “We won’t smoke any chubs unless we catch them ourselves.”

The Whitefish season runs from April through October, and is closed from October to December during spawning season. Whitefish are fished with gill nets, even under the ice. The chub season runs from November to January. Chubs are fished with trap nets in deeper water, up to 600 feet deep, and ten miles off shore. Chubs are a local favorite because of their high oil content, which makes them really good for smoking processes.

Berry Best Foods & Fish in Ellison Bay has grown from the Teskie family’s commercial wholesale fishing concern, and developed an upscale food and fish market by adding a quality retail business. Frank Teskie started fishing in the 1940s when herring was still abundant. Frank’s son, Frank junior, continued the family tradition, as has his son Neil.  “Dad wanted me to do something besides fish, and so I went to Carroll College. I told dad if I didn’t get drafted I’d come back and fish. I didn’t get drafted, came back here and been at it ever since. We now have the shop, an orchard, and do a bit of farming.”

Neil Teskie and his wife Francis keep the business going, and with six daughters and one son, everyone has helped out at some time on the boats or in the market. They now own and operate three boats: the Betty, the Tiger, and the Francis. “Most tugs are named after wives,” said Mary Kay Teskie Shumway, Neil’s oldest daughter, “This is for good luck.”

The Betty is a gill net boat, the Tiger a pound net boat, and the Francis, named after Neil’s wife, is a trap net boat. One of the Teskie’s boats, the Gem, has been included in the remodeling of their Ellison Bay fish market. The Gem was named after one of the boat owner’s wives in the 1930s.

Every year weather is the great unknown – will it be cooperative or not? “Can’t make any money with the nets on the beach,” Neil said. It’s not just storms, it’s also the ice in winter. “This year we had ice, it came kind of late, but there haven’t been a lot of fish in Green Bay, (in part) because of the zebra mussels – they don’t eat what the whitefish eat, but they disrupt the food chain,” Neil said. Like many fishermen in Door County, the Teskies use gill nets through the ice. “I love that,” he said.

“I would describe our business as a homemade gourmet market; we make very nice products. We make pies and jams from fruit from our own orchards, and we sell the fish we catch and also some Green Bay perch and farmed salmon from Chile.” The salmon sold in Door County fish markets is not local; most comes from Chile or Alaska and is either wild or farm raised. Teskies, for example, bring it in three times a week (Monday, Thursday and Friday). “The bigger the fish, the higher the Omega 3 in the fat,” Mary Kay said. “We sell two to four-pound filets.” The salmon in Lake Michigan is reserved for sport fishermen. Berry Best features not only fresh fish, but also smoked whitefish of a garlic and Cajun-smoked variety, and brown sugar-cured smoked salmon and chubs. The Teskie’s orchard has 18 acres of cherries, 4 acres of apples, nearly 2 acres each of raspberries and strawberries. The market features pies, jams and jellies, and homemade cherry salsa, as well as imported and domestic cheeses.

The job is hard and it does make money, but, as Neil said, “Lot of times you wonder why you’re doing it, and other times you know why you’re doing it. When you’ve got your life savings tied up in it – you just kind of hangout.” I asked Neil what his average catch might be, and he half-seriously joked, “I don’t know – it’s just like fishing – we never know. When you think you’re going to get fish, you get none. Then you think you’re not getting any and the fish are here!” The business fluctuates and Neil said that fishing was in many ways another minimum wage Door County job. Neil is on the water over two hundred days a year. “We’re really at the mercy of the weather,” he said. They don’t catch fish if a northeaster is blowing too hard. Or, if the ice is too thin they can’t winter fish. Or, if the summers are too hot the fish move out of the area.” I asked him how much wind can he put up with and he said, “It depends on how much you get caught in.”

For whitefish, the Teskies and Hickey brothers, and other fishermen take their boats out every day except Sunday. But Dennis Hickey notes, “If the weather is good and we’ve had a few rough days, then we’ll go out on Sunday, too.” Fish is sold right off the boat – just cleaned with the head and tail to those who want the best deals. “This is very economical, and we can sell it under $1.50 to $1.75 per pound,” Mary Kay said.

At Andy’s Peninsula Fish Market in Sturgeon Bay, people can get fresh fish and good meals. Andy Johnson has been in the fish business since he was a kid. He doesn’t own a boat, but rather has decided to stick with the market and restaurant end of the business.  Andy specializes in pickled whitefish and salmon, specialty BBQ sauce, and his own spiced-breading.

Originally from Sturgeon Bay, Andy has owned a fishing license since he was sixteen and has been working on charter boats since he was twelve years old. He moved into the market side of the fishing business when he was in his early twenties, and opened the market in 1996. Andy’s biggest challenge is balancing the busy four months of summer with the much quieter eight months that are off-season. “We really rely on locals to eat here,” Andy said, “and we’re open all year round.”

Andy has partnered with Alberto Guerra to open Las Rositas Authentic Mexican restaurant in the fish market. Alberto, originally from Tularosa, New Mexico, uses his great grandmother’s recipes to bring great tasting Mexican food to the peninsula. Alberto’s recipes are stored in his head, “up here,” he said, “with a dash of this and a dash of that.” Alberto’s father was a cook in the military, and he said, “I grew up with a frying pan in one hand and a fork in the other.” Specialties of the restaurant are a delicious whitefish taco, fish campachee, chili rellenos stuffed with white fish and white cheese. Alberto’s cooking and Johnson’s market offer a unique complement to Door County fish markets.

The fish markets extending from Sturgeon Bay to Washington Island offer wholesale, retail, and a great variety of prepared fish catering to the consumer’s wants. Fishing is a year-round industry for the people of the Door Peninsula. Both sport and commercial fishing are an important draw for seasonal visitors and offer gainful employment for many locals. This is the county for whitefish, smoked chubs, perch, and, of course, any of the sport fish you happen to catch.