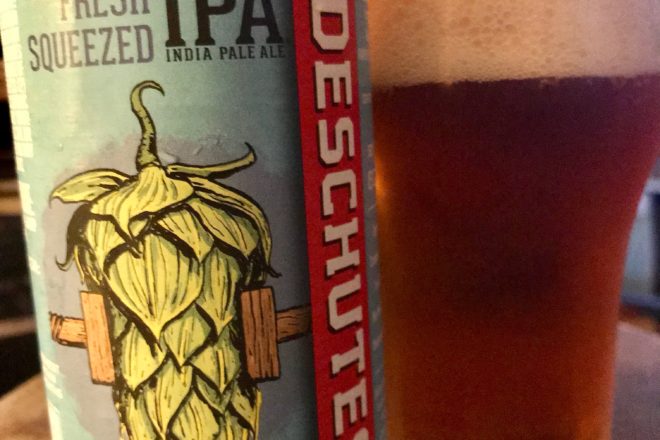 Rob Moore of the Ephraim Yacht Club stopped by the other day with a six-pack of Deschutes Fresh Squeezed IPA, informing me that although he is aware I’m not a big fan of [American] IPAs, he heard this was a good one. He added that he used to live in Portland and is well aware of the good beers Deschutes makes.

And I never turn down beer. It’s bad form.

Deschutes includes a packaged-on date. This sixer was from June 3, 2019. Just four weeks later, it’s sitting in my fridge.

It’s a 6.4 percent, 60 IBU IPA that pours an almost amber color, with a thick, white head atop, and layers of Belgian lace all the way down.

“Impossibly juicy,” the label states. “Undeniably refreshing. Freshly squeezed. No fruit was harmed in the making of this beer.”

Pale, crystal and Munich malts are paired with Citra, Mosaic and Nugget hops. Just by the color of this beer, I have to assume it has a hefty grain bill to compete with whatever they mean by fresh-squeezed hops, as indicated on the label with a juicy hop cone being squeezed by some sort of press.

Juicy? I suppose you could consider the Citra presence almost equal to a breakfast glass of grapefruit juice, except for the high levels of vitamin C and antioxidant properties you’ll get from the grapefuit juice.

Despite the big hop presence, hops do not completely dominate, which is why I like this American IPA. The hops offer comic relief to the staid malt: a giggle in the beer.

Next is a “German-inspired American India Pale Ale” from Bell’s Brewery of Comstock, Michigan. I don’t know what that means until I look it up on the Bell’s website and learn this beer is brewed like an American IPA, but with German malt and hops.

It’s called Song of Myself – the first of seven iterations in a series Bell’s calls the Leaves of Grass Series, paying tribute to Walt Whitman’s work. In this case, of course, it is paying tribute to the epic poem that begins:

“I celebrate myself, and sing myself,
And what I assume you shall assume,
For every atom belonging to me as good belongs to you.”

I don’t know what a German-inspired American IPA might have to do with Whitman’s eccentric poem. I would have thought a nut brown ale might go better.

However, this is a tasty, 6.5 percent beer. Very soft on the palate, with rich maltiness countering the unnamed German hops.

Although I enjoyed both of these IPAs, I still look forward to the end of the IPA craze.