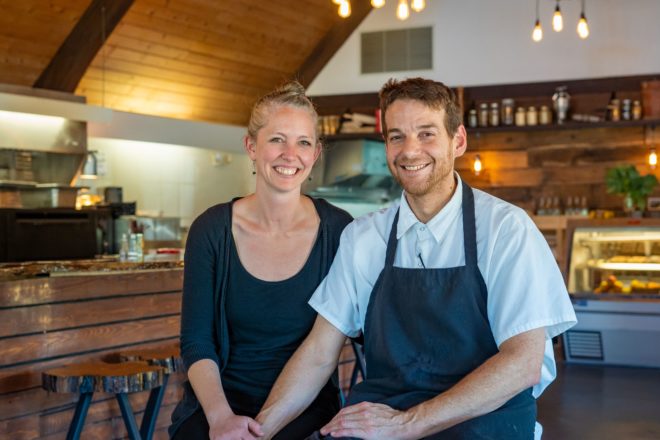 With white siding on the outside and wood on the inside, the high ceilinged Fresh Take 42 looks much like a barn, a fitting backdrop for the restaurant’s homemade dishes.

Sitting just north of the Red Putter in Ephraim, the eatery created by Ashe Rider and partner Dave Reera is a labor of love in its first season in the former home of Joe Jo’s Pizza.

Reera has several decades of experience as a professional chef, and Rider has worked in hospitality for about the same length of time. Together, they balance both sides of restaurant life: She handles the front of the house, and he handles the back.

When it comes to the menu, the newest eatery in Ephraim takes a slightly different approach to making meals. Guests choose an entrée – from Cobb salad to yam cubes with shishito peppers and much more – and all of the sides are served à la carte. That way, Rider said, people can choose what they really like and have more freedom to try new dishes.

“The theme we try to carry through our food is that it’s very natural, and you kind of know what you’re eating,” she said. “We don’t really use preservatives. We cook from scratch.”

The menu also rotates from time to time with four core entrées and three that change depending on availability and the season. Because Fresh Take 42 is focused on farm-to-table, fresh food, Rider said some menu items are limited in quantity, but that also allows them to introduce new offerings.

When they bought the building about a year ago, she said they wanted to do a complete overhaul of the inside, changing it to reflect the same theme as the menu through wooden stools, tables, benches and a bartop, some of which Rider and Reera made themselves.

Though they have no carpentry background – “We’re just handy enough to pull it off,” she said – the furniture (especially the bartop) is impressive. The room is also large and airy and has plenty of sit-down tables and bar stools.

“We like living things,” Rider said, pointing out the plants in the restaurant.

Sustainability is important to the couple, which is why they made some of the furniture themselves and replaced the plastic wall near the host stand with reclaimed wood.

They’re actively trying to avoid preservatives and pesticides as well, and she said it’s critical to source their food locally, though it’s a bit difficult to do as a new business. Nevertheless, they’re working at it and are building relationships with local farmers.

“It’s good for you; it’s good for the environment,” Rider said. “It’s, in general, just a better way to do business.”

Right inside the front door is a vending machine that in the (hopefully) near future, Rider said, will have some to-go options for those who don’t have time for a sit-down meal. Also, because the kitchen is open only until 8 pm and there are many hotels nearby, Rider hopes it will be a source for healthful, late-night food.

The machine, which she said took ages to find, is refrigerated and could offer goods to go such as peanut-butter-and-jelly sandwiches, housemade hummus and carrots.