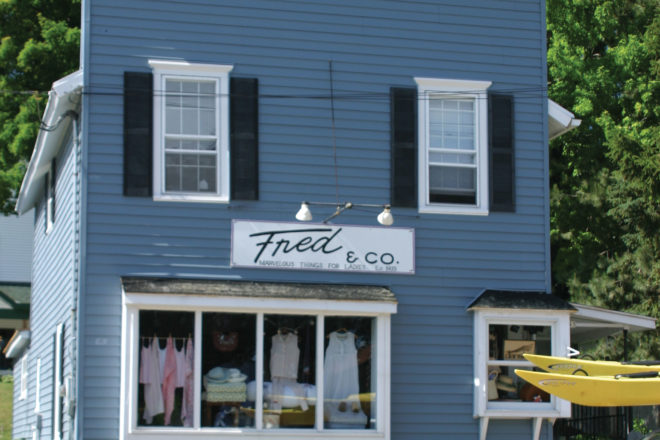 If you’ve ever walked into Fred & Co. and O’Meara’s Irish House in Fish Creek, you may have noticed some similarities in their owners. True, Terry Goettelman and Megan O’Meara could not be mistaken for sisters, yet they seem to be cut from the same cloth. Both women purchased their businesses while in their late twenties, have Bachelor of Art degrees from Midwestern universities, vacationed in Door County as children with their families, and most importantly, learned their businesses well outside of a classroom.

Terry and Megan both admit that it would not have hurt to take a few business courses along the way; however, neither one imagined that they would be running their own stores for a living. Humanities and a dance minor were Terry’s focus while Megan studied English and French. Terry began her Door County work experience while in college. She explored several venues and even opened up a coffee shop on the porch of Fast Buck Freddie’s in 1990, appropriately called Fast Buck’s Coffee. In 1994, Terry began managing Fast Buck Freddie’s for Bill Trost, one of Fish Creek’s established retailers. Inspired by the success of Fast Buck’s, Bill then opened Fred and Co. which sells, as the sign will tell you, “marvelous things for ladies.” Terry continued to work at Fred and Co. until purchasing it from Bill several years ago.

Megan’s Door County career began in April of 1999 when she purchased The Irish House, now called O’Meara’s Irish House. While O’Meara loves living in Door County, it was the store itself that brought her up from Chicago. Having traveled to Ireland many times visiting family and friends, Megan found the opportunity of owning an Irish import store absolutely perfect. Owning a small business is obviously very time-consuming; however, Megan will tell you that it doesn’t always feel like work. Visiting with her customers about their Irish ancestry and trips to Ireland is a great way to spend her days. She especially enjoys getting to know her Irish vendors and bringing their special products from Ireland to her customers.

Based on their similarities in age and situation, it was inevitable that the two women would become friends. Megan remembers how they first got to know one another. “Terry was one of the first people I met up here, but I didn’t get a chance to really know her until the off-season. I was in her store purchasing a pair of Dansko clogs and we began talking. Terry mentioned that she had a trade show coming up in Chicago, but that she was not looking forward to the drive. I laughed and told her how much I missed the aggressive nature of city driving. A deal was then struck – I would drive and she would cover the hotel expenses. And that’s how our friendship began.”

That friendship has proven to be a vital support system for both of them. They constantly exchange ideas and advice about their websites, their products, and what the customers seem to be looking for. They also rely heavily on Terry’s husband, Cain, whether it is for website design or moving store fixtures. Terry and Cain were recently married and Megan was their Maid of Honor.

Terry says that despite all the extra hours put in, there is nothing like being your own boss. What are some of the perks?  No fluorescent lighting, being able to wear what you want and selling products that you really believe in. Megan agrees wholeheartedly.

Favorite drink:  Good red wine, but is also a fan of margaritas

Number of Irish sweaters in closet:  7

Number of Irish sweaters in closet:  23