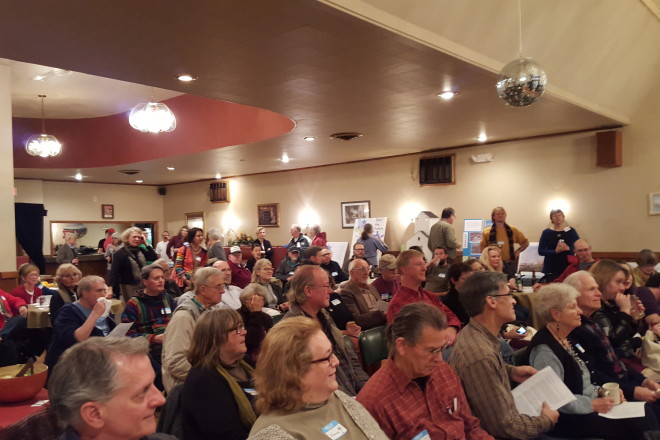 A chilly November rain didn’t keep a large group from gathering for an evening of camaraderie, food and conversation at the recent Friends of the Sturgeon Bay Waterfront Fall Social. Approximately 100 people filled the room at Benny D’z to hear updates on the group’s lawsuit against the City of Sturgeon Bay and to become better educated on the State Constitution as it relates to public lands. They also came to share ideas on civic involvement; tables lining the room offered information about upcoming elections, TIF and TID districts, Centerline Community Forum, repurposing plans for the historic waterfront granary and Free University. Five large, professionally drawn boards on easels at the front of the room depicted community-generated suggestions for alternative visions for the waterfront.

In one corner of the room, t-shirts were being heat pressed to order with Lynn Gilchrist’s original Save Our Waterfront design – an image of a tugboat chained to the granary, about to be besieged by a tidal wave. In another corner, granary-shaped cookies made from a handcrafted cookie cutter were available to those who made a donation to the Friends’ cause. A small red heart decorated each treat.

Laurel Brooks welcomed the crowd. She stood in front of a large oil painting by artist Stephanie Trenchard that illustrated recent events related to the westside waterfront. Brooks expressed gratitude for the turnout and the opportunity to reconnect after a busy summer and fall and encouraged everyone to remain involved as the lawsuit is decided and beyond. “We need you!”

Dan Collins echoed these sentiments stating, “The theme of tonight’s event is positive community engagement.” He asked for a show of hands from those who had heard the terms Ordinary High Water Mark and Public Trust Doctrine, and laughed at the large response. “I’m guessing we all know more about these issues than we did a year ago.” He gave an update on discussions the lawyers and judge were having regarding logistics of the lawsuit and explained possible scenarios as it moves forward. He cautioned, “This will be more of a marathon than a sprint.” He noted that the next big news, a determination of whether the suit will remain in federal court or be tried in state court, will most likely come in early January.

Laurel Hauser then reported on the formation of Centerline Community Forum and a citizen-led trip to Eau Claire to learn about successful planning practices used in other communities. She mentioned that discussions have begun with members of the city staff to offer an educational panel on capital planning tools early in 2016.

A question and answer period followed the brief presentations and members of the audience offered expertise on feasibility studies, the State’s Public Trust Doctrine and other related issues.

Collins closed the evening by reminding everyone that the Friends’ work is not without expense. He thanked the 97 individuals who had made contributions to date and encouraged others to join them by donating online at the Friends’ website, friendsofsturgeonbaypublicwaterfront.com.