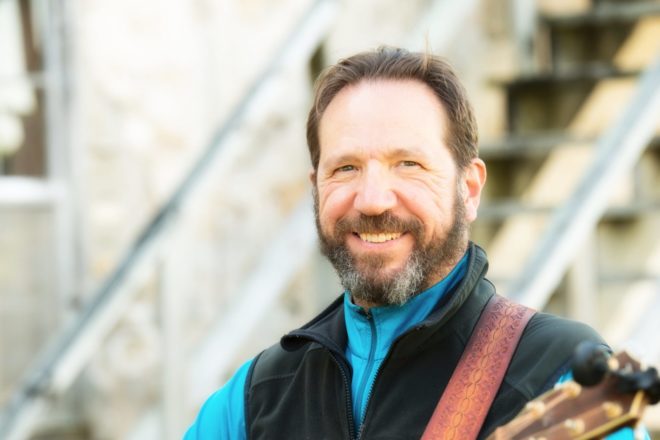 Doc Heide, a co-founder of Northern Sky Theater, has published lots of professional articles in psychology journals, but his latest publication is by far the most intriguing.

Tangled in Wonder collects lyrics, chords and melodies for 55 of his original songs, along with in-depth commentary and rare photos. Drawing on sources from The Odyssey to The Big Lebowski, Heide’s songs have earned international critical comparison to the works of Bob Dylan and made him a Kerrville New Folk finalist.

“Songs can reveal a lot about the inner life of the songwriter,” he said. “So, describing what inspired these songs has been a rich journey indeed.”

Heide will release this new songbook – and celebrate his 70th birthday in high fashion – at Door Community Auditorium on Sunday, July 24, when 18 stellar musician friends from around the nation will join him in concert. Most have appeared with Northern Sky Theater or its predecessor troupes, American Folklore Theatre and The Heritage Ensemble. Each will perform at least one of Heide’s songs, and several will harmonize together.

Lee Becker and Steve Koehler – featured in the popular PBS film of Guys on Ice – will also be there with that show’s composer, Jimmy Kaplan. On stage as well will be a current Northern Sky cast member, Lachrisa Grandberry; several longtime company members: Laurie Flanigan-Hegge, Dan Klarer and Matt Zembrowski; cellist extraordinaire Hans Christian, who has performed with Robbie Robertson, Billy Idol and many others worldwide; local bass legend Paul Sowinski of Big Mouth; and three members of The Heritage Ensemble: Deb Fett, Craig Konowalski and Tim McNurlen.

The evening will include some of Heide’s most popular songs, such as “The Mountains Call My Name,” but at least half the concert will be performances of rarely heard or never-before-heard songs, culminating in the world premiere of a stunning group anthem.

Since joining Northern Sky’s predecessor troupe The Heritage Ensemble in 1972, Heide has pursued a unusual double career. After completing a doctorate at Pennsylvania State University, he taught grad-school courses for almost four decades at the California School of Professional Psychology in the San Francisco Bay area.

During that part of his life, he did groundbreaking work on anxiety disorders that earned him the Outstanding Research Contribution Award from a leading international psychotherapy organization, and his work is still heavily cited decades later.

“I was lucky to be able to characterize a phenomenon that had previously escaped notice, which I called relaxation-induced anxiety,” Heide said. “Lots of people who suffer from anxiety paradoxically will get more nervous when they try to relax. And this has big implications for treatment.”

And when Peterson retired, he gave the theater to Heide and his colleague Gerald Pelrine. They invited their friend Fred Alley to join them in founding American Folklore Theatre, which was renamed Northern Sky Theater in 2015.

Alley strongly encouraged Heide’s songwriting career and moved to California to produce and perform on Heide’s first CD, Lessons I Learned from the Moon. It was named one of the top 10 albums of the year in 1990 by an influential music magazine.

Alley and Heide helped each other refine their skills, which Heide polished by cowriting more than 20 musical shows, including Belgians in Heaven and Packer Fans from Outer Space. After Alley died at a young age in 2001, Heide continued writing.

“It seems to be getting easier recently,” he said. “In the past, I’d sometimes go months or years without knowing what to write about. Now that I’m retired from full-time teaching and can just stroll the roads and trails of this beautiful county, inspiration seems to flow more freely.”

Does his psychology background help in songwriting?

“Perhaps. Psychology, religion and the arts are all pursuing similar goals,” Heide said. “They’re all trying to plumb the great mysteries and use that knowledge to live more compassionately. The greatest songwriters help us appreciate the universality of what we’re all going through. And that’s a big part of what psychology is about, too.”