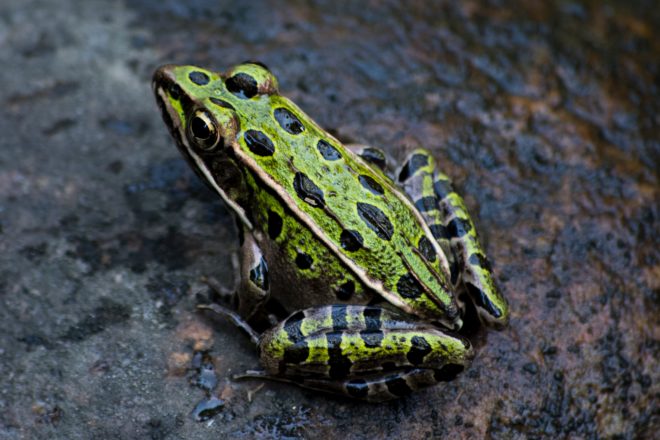 Wisconsin’s largest frog appears to be staging a comeback, a welcome trend documented over the last generation by hundreds of volunteers who’ve travelled roads near rivers, lakes and wetlands listening for the breeding calls of male frogs and toads.

The Wisconsin Frog and Toad Survey gets underway in coming weeks, and volunteers are likely to hear more of the booming call of the American bullfrog this summer when its mating season begins.

“Our volunteers are increasingly reporting more bullfrog calls since the Wisconsin Frog and Toad Survey began in 1984,” said Andrew Badje, a Department of Natural Resources conservation biologist. “That’s great news for several reasons. While American bullfrogs are considered a pest in western states where they’ve been introduced, they are native to Wisconsin and a valuable part of the food chain. Their comeback also shows we can take protective actions and make a difference.”

The Wisconsin Frog and Toad survey was initiated in 1981 as a response to known and suspected declines in the 1960s and 1970s in numerous Wisconsin frog species, including the northern leopard frog, American bullfrog, pickerel frog, and Blanchard’s cricket frog.

“Over the years, these citizen scientists have helped DNR conservation biologists define the distribution, status, and population trends of all 12 frog and toad species in the state,” Badje said.

Data collected by volunteers has documented the American bullfrog’s good news in Wisconsin, but also a downward trend for the northern leopard frog over the course of the survey.

Some frog calling routes and phenology surveys still need volunteers. Volunteers survey three nights a year along a pre-set route in each early spring, late spring, and early summer. Each volunteer makes 10 stops per night (five minutes at each site) and documents the species calling and the relative abundance of each species. See available routes at wiatri.net/inventory/frogtoadsurvey.