Eilen Jewell was six years old when her father popped a dusty cassette of Beethoven classics in the tape player. Her family was driving from Anchorage, Alaska back to their hometown of Boise, Idaho and what she remembers more than anything is staring at the vehicle’s ceiling and falling into the music. 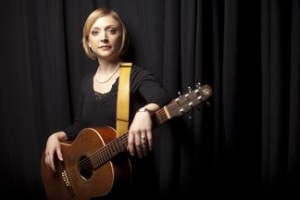 “I started playing air piano,” recalls the singer/songwriter. “I remember laying back there and thinking, ‘Someday I’m going to play just like Beethoven.’ When we got back to Boise I asked my parents if I could take piano lessons.”

Her parents, not musical performers themselves (“No one in my family performs,” laughs Jewell), supported their daughter’s interest and set her up with lessons. “Piano was my first true love,” says Jewell.

Though the Boise radio stations often play what Jewell refers to as ‘mainstream country,’ she discovered various musicians by various means. She raided her parents’ record collection and “started grooving out,” she laughs. “Then I got my own record collection going and started to develop my own taste in music.”

She heard her second major influence when she was watching a film. “I was maybe 13,” she recalls. “There was a scene in the movie where a Billie Holiday song came on – and it was really beautiful. It was the first time I heard someone sing and had to figure out who it was. I watched the credits roll and saw ‘Billie Holiday’ and went to the public library and checked out one of her tapes.”

Jewell listened to the tape and tried to imitate the famous singer’s unique sound. “[Billie Holiday] was the first person I heard singing and I wanted to try and sing like her. Bob Dylan was soon after that.”

And like Dylan, Jewell took up busking in college, sharing her talent in an informal setting. “I was really terrified to get on stage,” Jewell admits. “A friend of mine was really into [busking] – I saw how people reacted, it made them so happy. Music can transform a normal street scene into something festive.” So Jewell took up her guitar and sang her songs. “Then I played a couple songs at an open mic with friends, then by myself – it was an evolution.”

From Ludwig van Beethoven to Billie Holiday to Bob Dylan, Jewell developed a sound that ranges from gospel, lounge, country, folk, and jazz. Her clear, crisp voice complements each genre well, and she embraces the diversity, taking a stab at each one.

“I don’t want to limit myself to one genre,” she says. “If I want to sing a jazz song, I’ll sing a jazz song. I have a lot of musical tastes – that has confused and irritated a lot of people along the way,” she laughs. “But there are also a huge number of people who find that refreshing. If a song wants to go in a particular direction, I follow that direction. I can’t stifle that creative urge with worrying about what category it fits under.”

Her indefinable sound has caught the ear of many throughout her U.S. and European tours, including The Alternative Roots Magazine, which named her one of today’s top ten female vocalists, and actor Tom Hanks, who listed Jewell as a summer listening favorite in Entertainment Weekly.

Along with her band – Jerry Miller on guitar, Johnny Sciascia on upright bass, and her husband Jason Beek on drums – Jewell will perform her eclectic tunes at Door Community Auditorium on Aug. 4 at 8 pm.

“We’re really looking forward to it,” says Jewell. “It’s the grand finale of this tour, though there is always another one around the corner.”

To learn more about Jewell and listen to her music, visit eilenjewell.com.