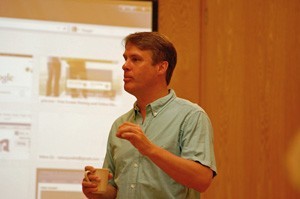 Terry Moran conducting his seminar on the Supreme Court at Bjorklunden on Aug. 9. The ABC newsman who has served as co-anchor of Nightline since 2005 will be heading to the network’s London bureau as the new chief foreign correspondent.

Despite 16 years of high profile reporting for ABC and Court TV before that, Terry Moran admits that “television was an accident” for him. When he graduated from Lawrence University with a degree in English in 1982, he wanted to be a globetrotting print journalist working for a major magazine.

The former co-anchor of ABC’s Nightline spent the last two weeks in Door County before heading to London for his new assignment as the network’s chief foreign correspondent.

He spent the first week, Aug. 4-9, conducting a seminar at Björklunden, the 425-acre estate just south of Baileys Harbor owned by his alma mater, Lawrence University in Appleton, Wis. The 1982 Lawrence graduate’s weeklong seminar was focused on the Supreme Court, which Moran covered for ABC, but was also sprinkled with insights garnered as ABC’s White House correspondent during the end of the Clinton years and into the beginning of Bush’s second term.

The second week he spent chilling at Björklunden’s guest house and getting to know Door County. He agreed to sit down for a chat about his work.

Upon graduation, Moran was granted an unusual post-graduate program called a Watson Fellowship that, instead of sending him back into a classroom, sends him out into the world to explore. He spent a year in Ireland.

“The only thing I knew is that I wanted to travel around the world and write about it. I applied to every single magazine I could think of when I got back,” he said, naming a list of magazines of all stripes. “I didn’t care about the politics. I just wanted to write for a magazine. The only place I got a little nibble was The New Republic. On the strength of that, I moved to Washington and just kept knocking on their door.”

Eventually hired by The New Republic, he soon learned it wasn’t enough to sustain him, so he went to work for American Lawyer magazine, covering the Supreme Court and legal issues in the nation’s capital.

“The guy who founded American Lawyer [Steven Brill] also founded Court TV [in 1991; now truTV]. He said at one point, ‘Would you want to travel around the country and cover trials?’ OK. I wasn’t sure anyone was going to watch it.”

And then the Menendez Brothers and O.J. Simpson happened in quick succession in the early ’90s and Court TV created its niche.

In 1997, Moran made the move to ABC News. He still had his mind on globetrotting and was hoping for an overseas assignment, such as the Jerusalem bureau.

It was during the White House years that Moran developed rhinoceros-thick skin.

“The White House is a tough beat,” he said. “One of the things I learned early on, especially at the White House, you’ve got to have a thick hide doing this job. People are always going to sense bias. They won’t like the way you look that day or the way you told the story, and they’ll let you know it. If you take that personally, you’ll get paralyzed. Right after 9-11, if you asked any question in a White House briefing that had the slightest note of challenge in it, there would be an avalanche of emails and calls. At first, I would start answering them. ‘No, I am not a traitor. I love my country. No, I don’t want the Jihadists to win.’ That’s a mistake. People just want to vent.”

“When Ted started Nightline, there was no cable,” Moran said. “So having people talk about news of the day, it was very unusual. Revolutionary.”

But things had changed significantly when Koppel retired in 2005.

“You heard people yapping about the news all day,” Moran said.

For Nightline after Ted, ABC brought in three co-anchors, Martin Bashir and Cynthia McFadden (a former Court TV colleague of Moran’s) in New York and Moran in Washington. The format changed from the single issue of Koppel’s time to multi-issue, and embraced pop culture as well as news.

“They knew they wanted to change it. You couldn’t do the same thing Ted did because he was Ted. So we did mix it up,” Moran said. “I was comfortable with it. I was always going to be the hard news guy on the team. We were roasted by the critics. It taught me that TV critics really don’t understand TV. The audience does. You have to add value to their lives in the news program. If you don’t they will turn you off. If you are telling them something they already know or something that doesn’t connect, they will turn you off. You have to get them to care. That’s a great part of the challenge. Ted was fantastic at that.”

But the change paid off.

It worked so well that Moran is now on his way to lead ABC’s largest overseas news bureau.

“Nightline allowed me opportunities to travel. I was in Afghanistan four times, Iraq four times, Arab Spring. I think that helped lay the foundation for this,” he said. “I’m psyched and really excited about it, but there’s a healthy anxiety about it, too. I’m very excited about the kinds of stories. This is really what I wanted to do all along.”