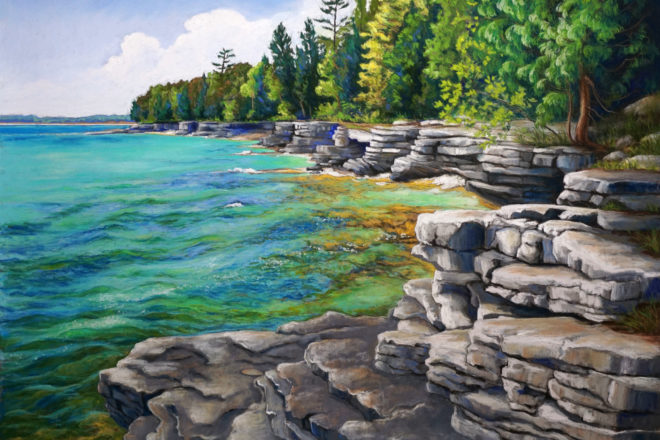 Nicola Kaftan – Niki to those who know her – grew up believing she could be whatever she wanted to be. “My parents made us feel like we can do anything,” she said of her and her five siblings, who are now artists, writers and musicians living across the country.

She grew up in De Pere with “crayons in my hands. The moment I was born,” she said, laughing. Her mother was a great painter and professional photographer who taught her to draw; her father dabbled in mosaics and watercolor; and her grandfather was another artist whose work still hangs in her home.

From the get-go, Kaftan was “tied to the landscape,” she said. “Nature is very important. Dad was an environmental activist. He was fighting to stop pollution in the Great Lakes, a friend of Gaylord Nelson. Caring for the land was really stressed in my family.”

Kaftan’s family celebrated their love of nature in Door County. They often stayed in Ephraim at a place called Knudsen’s, now the Evergreen Beach Resort. In 1964, the family bought “a rundown little cottage on the quiet side,” she said. “I spent every summer there. It’s where my heart is.”

They fished, swam and hiked while her mother and grandfather created artwork based on Door County landscapes.

As she grew, Kaftan started experimenting with visual art. “I did painting, sculpture, pottery, everything!” She realized she wanted art to be a part of her career.

Once it was time to leave home, Kaftan attended the University of Wisconsin – Madison, and her artistic interests took a turn. “I got into an experimental filmmaking class between ’70-’74. At the time, I thought experimental film was the future. I looked around and found Cal Art.” 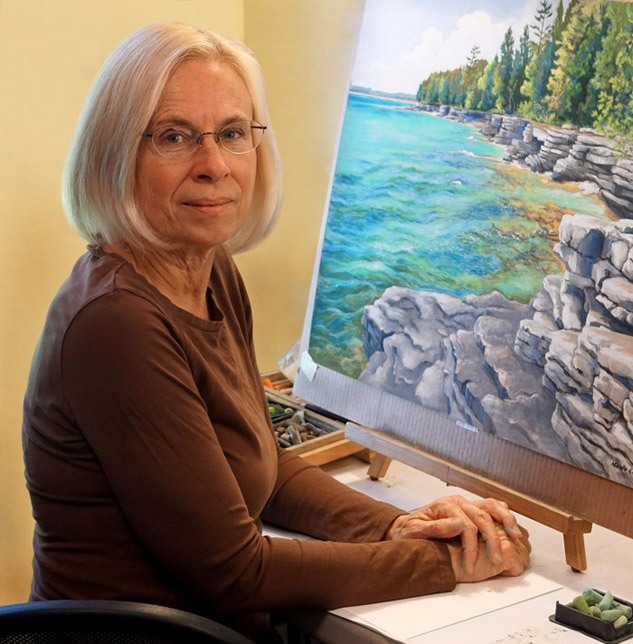 She left Wisconsin for the west coast, and learned more about animation, experimental film and visual effects from great professors at the California Institute of the Arts – Jules Engel and Pat O’Neill – with classmates who would go on to become household names.

“When I was back in Door County one summer, all my friends went to work on Star Wars,” she recalled. “It was life-changing for a lot of people. The whole visual effects of film blossomed.”

Her life changed as well, she met her husband and took classes that kept her and her skills relevant to filmmaking. “I decided I needed to learn computer graphics.” She worked in the feature film industry for several years doing visual effects and animation.

While living Ojai, California, she came across the work of Bert Collins, a pastel artist. “That was a breakthrough,” said Kaftan. “I just took off.” She started creating landscapes of both Ojai and Door County. “Door County is blues and greens and water. Ojai is dry and olive greens and terracotta. They are two very different environments. I’ve gone back and forth between the two places.”

When Kaftan moved back to Los Angeles, she found pastel artist Loraine Veeck. “She was teaching pastels and I haven’t been that good with perspective. She helped a lot with that,” Kaftan said.

When the visual effects departments of various studios moved up to Vancouver, Kaftan and her husband followed. When they wanted to get back to the United States, they called Detroit home. “When we were in Detroit I thought, ‘This is great! Now we can move to Door County.’” They bought a piece of property in Jacksonport, where they plan to build a home they will move into permanently.

There, Kaftan plans to keep up her craft and enjoy the same activities she did as a girl. “Now that we’ll be in Door County, I’d love to try plein air,” she said. Usually she photographs a scene first. “I never use anyone else’s photograph,” she said. “I take them home, print them out, and don’t have to rush.”

When she works on her art, she likes to turn on some music and “go into a trance,” she said. “I can’t be disturbed.” It takes her about three to four days to complete a piece, “with lots of breaks in between.”

Kaftan currently shows at the Woodwalk Gallery near Egg Harbor, something she considers a flattering form of validation. “I had given up the whole idea of showing in a gallery years ago,” she admitted. “My brother Joe said, ‘You need to get serious about this. Get in a gallery.’ He encouraged me to apply.”

Her work showcases some of Door County’s most beautiful, iconic scenes – from Cave Point to Toft Point – as well as peaceful nature scenes – unnamed valleys, hilltops and creeks.

While pastels will remain a part of her life, once her husband retires and they call Door County home, the couple hopes to make a film based in Door County.

“We want to use all the resources – from acting to whatever,” she said. “Door County’s so great. There are so many working artists.”

She’s excited to live among them and share her artistic talents – from film to fine art – with the county.

For more information about Kaftan and her work, visit nicolakaftan.com.