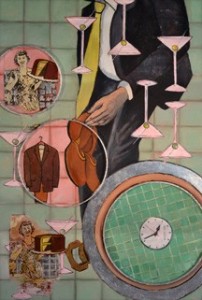 “The Romeo” by Mara Manning

It all started with a pack of flash cards picked up at a thrift store. An artist and a teacher, Mara Manning constantly looks for objects of inspiration and tools for teaching.

“They are a series of learning to read flash cards from the 1960s. They’re about 5” by 8”, and I kept them at school and used them with students playfully, off and on, for a number of years. I wanted to use them seriously somehow,” Manning said.

Manning, who has 25 years experience painting and exhibiting and 18 years spent as a high school art educator, began working with mixed media from the start. She worked with tar, found objects and collage. Using different combinations in each of her pieces, Manning pushed boundaries and explored a strong use of metaphor.

She moved away from mixed media for about 15 years, but carrying around the flash cards instigated Manning’s return. “I wanted to do a series of paintings with them; I decided I wanted to embroider with some of it – that started with mixed media again,” she said.

The paintings all feature a variety of media on wood panel and canvas. Manning uses textured, layered surfaces and gel medium transfer to transform the flash cards into works of art that tell a story.

“Each piece is based on the card, but it makes its own statement,” Manning said. “I’m talking about stereotypes and the visual images that you’re taught as a kid learning to read. I wanted the paintings to be whimsical and quirky, not hurtful or edgy.”

Manning’s work comes together nicely on Mr. Helsinki’s large walls, and the atmosphere of the restaurant lends itself to looking at work and conversing about it – perhaps over a glass of wine, dinner or dessert.

“Circle the Wagons” by Mara Manning

Chris Cote, owner of Mr. Helsinki’s, said, “I think what’s unique about Manning’s show is the fact that it has three very distinct styles: landscapes, abstract landscapes and mixed mediums. Most people see the show and cannot believe it’s all the same artist.”

Her work ranges from incredibly paired down, minimalistic abstracts like the painting, “Zen Pair,” which utilizes oil and wax medium on wood panel. Others are loud and colorful. “A Game of Bridge,” incorporates an ox, a goat and three dogs leaping, for a whimsical, textural feel.

Manning said, “At one point, I thought, ‘It’s such a big space! I’m not going to be able to pull it off!’ Then it started to come together, and I got really excited. I think people go to Mr. Helsinki’s restaurant because they expect to see work that’s out of the ordinary or pushing the boundaries.”

There are several paintings in the series where Manning attached the flash card directly to the canvas. She incorporates the pattern from the card in her work to emphasize that children are affected by those same patterns while learning to read. Some of the cards also have an underlying message.

Manning said, “Throughout the series there are things that are ‘boy’ or ‘girl’ things. These are the kind of images that were handed to someone my age – I’m 50 – we were the Dick and Jane generation.”

The paintings are playful and puzzling. They require the viewer to problem solve their way through the different images presented.

“I want people to take time to take in all the elements – the narrative of the piece – and experience where it takes them,” Manning said. 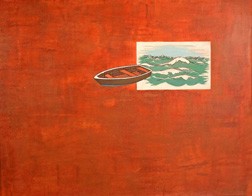 Manning’s exhibition also includes minimalistic landscapes based on photos taken while biking around Door County’s rolling farmland. In these paintings, she develops a story behind a single structure or group of buildings through the use of color and dimension.

“They’re very paired down. It’s about where the buildings are placed and how they face off, or confront, one another,” Manning said.

In all of her works, a dynamic use of color is present.

“It’s all very playful and textural. I hope that people appreciate and enjoy that,” Manning said. “Color’s a big factor in my work – and the relationships between the colors. The color palates are not stereotypical; they are playful and expressive, in both the landscapes and the card series. I like to push the envelope.”

Manning’s distinct style and interesting use of mixed mediums make her exhibition particularly compelling. Each work tells a story and offers itself up for a variety of interpretations. Her attention to detail and passion for painting are apparent in each piece. Manning’s technique is interesting and unusual; which translates into a refreshing and inspirational collection.

Mr. Helsinki’s is located 4164 Highway 42 (above the Fish Creek Market) in downtown Fish Creek and is open daily at 5pm. For more information call 920.868.9898. Manning’s exhibition will run until October 13.