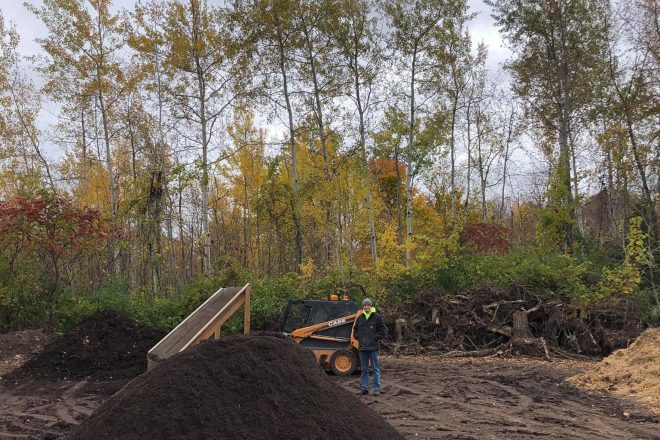 A pilot program in the Village of Egg Harbor is enabling partnering businesses to turn past-its-prime produce into compost to be used in local gardens. Photo by Sara Rae Lancaster.

Approximately 40% of the food waste in the United States comes from grocery stores, restaurants and food-service companies, according to the Bureau of Labor Statistics. That’s a lot of wilted lettuce, overripe avocados, melon rinds and other veggie scraps that those who are producing the waste wish they could handle differently.

“We have tried to figure out ways to not throw out lettuce leaves and produce past its prime,” said Kaaren Northrop of Callsen’s Main Street Market in Egg Harbor, “but nothing has worked really great in the past.”

Now that’s changing. A new composting program offered by the Village of Egg Harbor and the Door Community Compost Initiative has offered business owners a way to use past-its-prime produce for compost.

“The village has had lawn-waste composting forever,” said Jess Reinke, general manager of the Kress Pavilion, coordinator of the village’s Green Tier Legacy Community initiative, and one of the organizers of the new composting project. “Then two years ago, we started working with the DNR to add food waste to the compost.”

The time it took to secure the property permits and training paid off this past spring when the village launched the pilot program in partnership with local businesses, including Main Street Market, Parador, Fireside, Door Artisan Cheese Company and Hatch Distilling Co.

From May through October, the program supplies partnering businesses with five-gallon buckets to fill with fruit and veggie scraps.

Once a week, a staff member from the village’s Public Works Department collects the buckets and adds the contents to the special food-waste composting bin created for the project. To avoid contamination, each bucket is numbered so as to easily identify where any noncompostable items originated.

“A lot of the restaurants ended up requesting more buckets during the season,” Reinke said about the enthusiasm the program generated.

Once broken down, the resulting compost will be used in gardens throughout the village and made available to residents and the participating businesses. To date, Reinke said the village has collected nearly 200 five-gallon buckets and diverted away from landfills nearly 3,840 pounds of food waste.

Although the program is still in its infancy, Northrop said it seems to be working well.

“Composting is one of those things that I think everybody would like to do, but you have to think about how you’re going to do it and if it’s going to work,” she said. “You need to have a system; you need to have room to store it before bringing it to the compost site; and you need to be aware about not contaminating the compost by adding something that isn’t compostable.”

Chris Roedl, owner of Hatch Distilling Co., said he hopes to see more restaurants and businesses throughout the peninsula join similar projects, even if they can contribute only a few times during the season, like his business does with lemon rinds from making limoncello.

“I think this is the next step to differentiating Door County from the other tourism destinations,” Roedl said. “I think guests appreciate knowing that [as restaurants and businesses] we’re thoughtful in how we handle things environmentally, from the supply chain all the way through to the end.”

The Need for Resources to Use Unsellable Edibles

Others in the food industry are also looking for ways to expand composting efforts and shrink food waste. In Sturgeon Bay, Tadych’s Econo Foods doesn’t have an official program, but produce manager Killian Hill said the store does get occasional requests from farmers and others who have a use for pre-consumer fruit and vegetable scraps or produce that is past its sell-by date. In the case of expired whole produce that is no longer sellable, it is placed in a box, which the public can buy for a few dollars.

“The weight and what’s inside the boxes varies,” Hill said, “but anyone can call the produce department and ask about picking up a box.”

The owners of Fish Creek Market, Cristina Cruz-Jones and Stephen Jones, said they would welcome additional resources and opportunities to reduce the disposal of overripe fruits and vegetables.

“To our knowledge, there’s no resource [in Fish Creek] for perishables that are edible, but not sellable,” she said.

Having an available resource is only part of the solution, Cruz-Jones added. There is also the issue of time: time to find the appropriate existing resources – or if nonexistent, time to establish them – and time to successfully use such programs. In the meantime, the family does its best to use what they can at home.

“But [until there are more resources], we have to throw away whatever we can’t use,” she said.