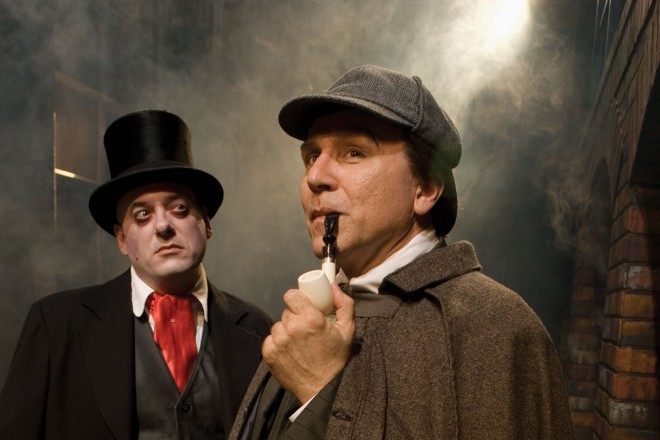 Greg Vinkler has had a constant stage presence at Peninsula Players Theatre for over 20 years. His body of work is broad and his roles in the off season have taken him around the globe. Although the Players enjoy large audiences all summer long, few people are aware of the quality actors our local theater attracts. Greg Vinkler is certainly the reason that some decide to come and spend their summer. He is an accomplished actor and currently serves as the artistic director of the theater. Oh, and by the way, he’s also starring in a Broadway play.

Not everyone can say they got their start playing God but that is exactly the case for this Peninsula Players veteran. Greg’s first theatrical memory is of his third grade’s Christmas production in which he did, in fact, play God. You would think that such a lofty role would have set him on the course to becoming a professional actor, but early on, acting-wise, Greg’s only exposure in front of an audience was during memorized speeches or reading aloud in class which he both excelled in and enjoyed.

Greg was born and raised in areas on the south side of Chicago but he didn’t have much exposure to the dramatic arts. In fact, his high school in Chicago was so new when he attended, it didn’t have a drama department. They did start a band and, for artistic outlet, Greg joined, playing both piano and clarinet. Greg recalls, “They were so desperate for [band] members; the director taught me the clarinet so he could have that instrument in the band.” Although the high school did later start a drama department, Greg stuck with the band for all four years.

When Greg entered college at the University of Illinois, he assumed that he would be a music major but found he could not stomach music theory, and so he began searching for something to major in. It seems he tried most everything – English, astronomy, art, advertising – until he remembered the positive experiences he had had with acting. He took a beginning acting class for non-majors and that was that. He found where he belonged. Greg continued on to receive his Bachelor of Fine Arts degree.

After a stint in New York City which helped solidify his decision to continue to pursue acting as a career, Greg continued his education in graduate school at Ohio University where he received his Masters in Fine Art. After his schooling, he relocated to Chicago which is where he met Bob Thompson. If you don’t know Bob Thompson, I suggest reading up on the history of Peninsula Players and Bob’s role in it. He is a Players legend and close friend to Greg since the two met in the early 1980s. Bob talked about the theater quite a bit and encouraged Greg to see it first hand. Greg came to see a friend in a 1984 Peninsula Players production of Crimes of the Heart and enjoyed his time so much that he thought perhaps he would like to spend a summer on the lake performing at the Players.

“Bob Thompson brought me to Door County. We had worked together in Chicago, and he kept telling me he wanted me up there. I kept auditioning for Bob [artistic director], Jim McKenzie [executive producer] and Tom Birmingham [general manager] for what seemed like years until one day, I heard someone had dropped out of the season. I gave Bob a call and they brought me up. I loved the theater, what I got to do there and the beauty of the area – it was a very inviting combination. And those feelings have not changed for 20 years. In fact, I love the area and the theater more and more all the time.”

That first show was a production of Doubles in 1988 and was directed by his friend Bob Thompson. Since his first season, Greg has been in or directed at least one show at the Players every summer with the exception of one.

As we all know, Door County is a mostly seasonal place and, like many, Greg leaves the area in the winters to engage in other acting opportunities. Staying mostly in the Chicago area, Greg has worked as an actor primarily at Chicago Shakespeare Theater as well as Steppenwolf, Goodman and many others. The connections made at those theaters opened the door to working at Singapore Repertory Theatre, London’s Barbican Theatre (with Gary Sinese in One Flew Over the Cuckoo’s Nest), and Stratford-upon-Avon where he played Falstaff (his favorite role “period”) with the Royal Shakespeare Company (that’s kind of a big deal, in case you didn’t know). Greg has three times been the recipient of the Joseph Jefferson Award, Chicago’s award acknowledging excellence in theater, two Artisan awards and an After Dark Award.

Currently, Greg is starting his second year as Peninsula Players Artistic Director. Although Greg’s expertise and advice has always been a major influence on the season, now the decisions are solely up to him. It is a different kind of role to play and one that he has happily taken on, saying, “Every year I’m excited about what we’re going to do – especially now that I have the opportunity to bring plays I love to our audiences.”

With the benefits of a multi-million dollar theater renovation at Peninsula Players, the scope of the plays that can be produced has expanded, opening the door to many exciting opportunities for Greg. Due to the larger stage and dressing areas, the cast size can now be much bigger and with the addition of an orchestra pit, musicals can now be a part of the season. It is a thrilling time for the theater and also in Greg’s professional life. This past winter, Greg was cast as “Doc” in the Broadway production of West Side Story.  Greg flew to New York on his day off from the Players and auditioned for Arthur Laurents, the original playwright of West Side Story. He was offered the part later that same day and started rehearsals in Washington DC last December. The play opened in DC to wonderful reviews. West Side Story opened at the Palace Theatre in New York City on March 19th. At the time of this writing, West Side ticket sales are second only to Wicked.

I think everyone would agree that the Peninsula Players is one of Door County’s most treasured institutions. Its history and quality of theater is unequalled in the Midwest and no one can sing its praises as eloquently as Greg Vinkler. Simply by returning year after year Greg tells us that this place is something special, and it is the talented people like Greg who make it great.