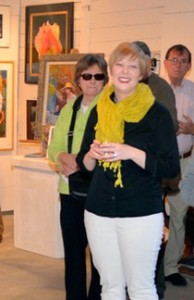 The board of directors for Ephraim’s Hardy Gallery is beginning preparations to launch a search as they seek to fill the position of Executive Director, a position which Door County native Elizabeth Meissner-Gigstead has held since October 2008. Gigstead will say goodbye to the Hardy at the end of the season to begin her new position as executive director of the Miller Art Museum in Sturgeon Bay. In December, after nearly 25 years of service, Bonnie (Oehlert) Hartmann will retire.

“What began as a three-month internship back in 2004 has provided me with nearly 10 years of challenges and ongoing learning opportunities. I have gained a deeper understanding of myself and our amazing community and the Hardy’s unique role within in it,” Gigstead states. “I have had the great privilege to serve this organization as intern, volunteer, exhibits and community relations director, and executive director. In the end, these experiences, varied as they have been, have created a foundation for my career in the visual arts. It is with both regret and anticipation that I inform the community that I will begin a new chapter in my career at the end of this season.”

Gigstead will begin her new role at the Miller Art Museum in December 2014.

A native of Sturgeon Bay, Gigstead graduated from the University of Wisconsin – Green Bay with a Bachelor of Arts degree in gallery and museum practices with an arts management minor. Gigstead is also a 2012 graduate of Leadership Door County. For more information call 920.854.2210 or visit thehardy.org.