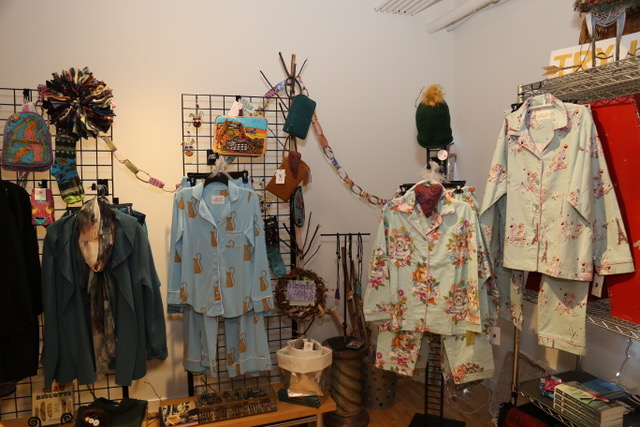 When COVID-19 slowed business at Monticello on Sturgeon Bay’s Jefferson Street, owner Diane Magolan opened a pop-up store, Monti, at the city’s newly opened downtown Marketplace. Casual wear of a kind she doesn’t sell at Monticello was a runaway hit, including pajamas. The pop-up was so successful that she’s decided to make it permanent. Photos by Tom Groenfeldt.

After 26 years of operating Monticello on Jefferson Street in Sturgeon Bay as a standalone store, Diane Magolan opened a second location two weeks before Thanksgiving: a pop-up nicknamed Monti at The Marketplace on 3rd Avenue.

“The season was exciting,” she wrote in an email. “Marketplace has some incredible energy. The setting brings out a joy in everyone who comes in. Monticello is going from pop-up to permanent. This whole experience has been a wild ride and an incredible surprise to me. Happy. Happy. Happy.”

Magolan will continue to offer her personal design services and her full wardrobe range at Jefferson Street, where the space allows her to focus on the high-quality, American fashion that attracts a sophisticated, older clientele from Door County, Green Bay, the Fox River Valley and even as far as Sheboygan.

“If they are going to Europe for two weeks and bring in four pieces they already own, we can add a few items and some accessories, and everything is interchangeable,” Magolan said. “I don’t see that happening at Marketplace because it’s not intimate enough.”

Before COVID-19 upended life, her clients would make a daylong shopping excursion to Sturgeon Bay that might begin with breakfast at the Inn at Cedar Crossing, include a Bloody Mary at Kitty O’Reilly’s and end with a drive home or a stay at a local hotel.

The pandemic made such shopping excursions tricky, especially for seniors, so Magolan – like so many other business owners this year – decided to try something new.

“My business was really hurting this year, and I thought I had nothing to lose doing a pop-up for six to eight weeks,” she said.

Magolan shifted from outfitting her clients for European travel and visits to New York or Chicago to offering a more casual style – much more casual.

“My bestselling clothing at Marketplace was pajamas,” she said. “We had a phenomenal month in pajamas.”

But she did take over all her cashmere sweaters.

“You don’t have to think too much about cashmere,” she said. “It’s not like building a wardrobe.”

Magolan’s concerns about demarcation of the floor area or overlapping with the other two retailers at The Marketplace – Lola May and Bliss – have vanished. She finds it fascinating to observe how the other retailers work, and often, customers don’t even realize which store they’re in until it’s time to pay.

“I am in absolute awe of what Todd [Trimberger, co-owner of The Marketplace and owner of Bliss] did, and how he did it in COVID: his vision every day about how he makes things happen, and how he redoes the store every 30 seconds,” she said. “How do you even tell people what to do? It’s like a lot of mice scurrying around.”

Sturgeon Bay is really coming into its own, Magolan said, which she predicted years ago when she moved from Fish Creek to Egg Harbor and then to Sturgeon Bay in 1990. At that time, Sturgeon Bay was sleepy, and merchants were friendly and happy to refer customers to other shops. It’s no longer sleepy, but it is still friendly, even among competitors, she said, who do not have to make all their money in just a few months.

Magolan sees the next big challenge as buying for spring and summer: Will there be shows? Will they be safe? Will she brave an airplane to reach them, and if not, will Chicago have enough selection? The first show she’s heard about is in early February in Chicago. Will that feel safe? She did a small show in Green Bay with masks required and clothes shown only by two-hour appointments – not exactly a replacement for a major show.

And she doesn’t know whether all of her suppliers are still in business. She had to cancel some purchases or reduce others because no one was shopping in May and June.

Magolan is closing the Jefferson Street showroom until spring, when she hopes to see customers, both old and new.

“I’m hoping to bring new customers from Marketplace up to Jefferson Street,” she said. “To stay in business, you have to have new customers.”

Yet she wonders what will come next for Jefferson Street now that Bliss has relocated to The Marketplace.

“When they [Bliss] were all gone, I just felt – I was shocked at how empty it was and how I had taken for granted how much that he [Trimberger] was our street, and that we were a street together,” she said. “It made me really sad.”

Magolan is hoping another boutique or art gallery will move in. Monica Ramirez is half a block away with her new gallery, Mona Lucy’s Art; and the city could use a gallery to show the work of artists who

participate in the Sturgeon Bay Art Crawl but don’t have gallery representation.

Magolan is full of ideas and optimism and credits COVID-19 with pushing all businesses into new, creative ways of being.

“It gave just everybody a kick in the butt,” she said. “I think all kinds of wonderful things will come from it.”