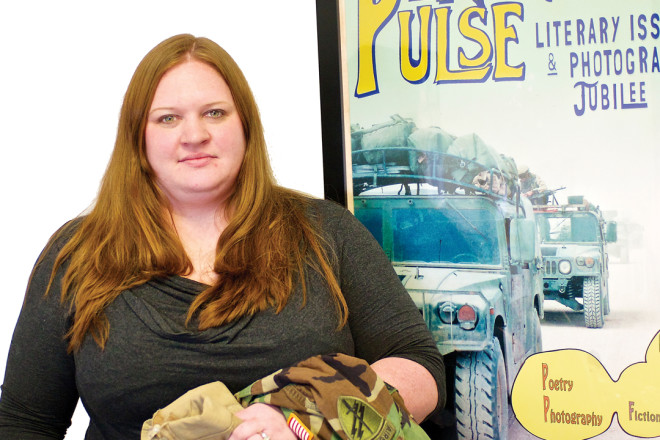 Ten years ago, Michelle Rasmusson was at war. As part of the 432nd Civil Affairs Battalion, her set of boots was one of the first 90,000 to hit the ground in Iraq as part of Operation: Iraqi Freedom.

“The war actually started on my birthday,” said Michelle. “It’s always fun when you’re rolling into a foreign country on your birthday and an explosion is going off and you’re like ‘What the hell was that?’ It was sort of a weave and bob sort of day.” 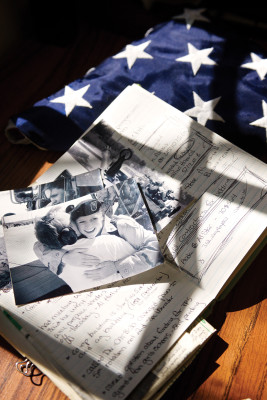 Michelle carried a journal during the war. Photo by Len Villano.

Thankfully, Michelle survived her experience overseas, although everyone in her unit was not so lucky. Within a couple months, a handful of members in her battalion’s security team had been killed. Within three, her captain had committed suicide.

But her unit, responsible for infrastructure repair, also accomplished a lot of good while in Iraq.

“A lot of the media either picked and chose or didn’t know everything we were doing over there,” said Michelle. “It came down to 190 schools rebuilt, 27 police officers trained, [who knows] how many hospitals built, police stations.”

While not technically part of a combat unit, the fact that Michelle’s unit was embedded with an infantry team meant she saw her share of firefights. She rolled in with a unit of marines, slept on top of her Humvee, and lived with the grunts. And she carried a grenade launcher with her almost everywhere she went.

She came back home when she was 21, where, as well as dealing with physical issues, she was diagnosed with Post-Traumatic Stress Disorder, the symptoms of which include everything from insomnia to flashbacks to anxiety attacks. 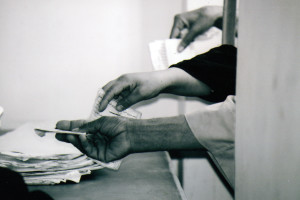 “Pay Day” is one of the many photos Rasmusson took while serving in Iraq. So are the photos that follow.

“The smell of diesel will kick it into high gear,” said Michelle. “You can picture yourself right back in that situation. My biggest nightmare at night is running out of ammo, believe it or not.”

Her life, however, continued onward. She came back to a marketing job in Appleton and tried to fit back into the corporate world. But it didn’t take.

“Within a couple weeks of coming back I was right back in my civilian job and you’re going, ‘Okay, two weeks ago I was getting in firefights and now this person’s yelling at me about a roll of paper.’ So I said that’s it,” said Michelle. 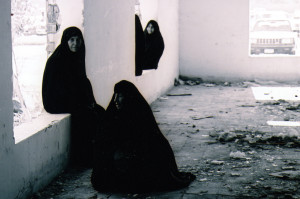 In 2006, Michelle decided to pack everything up into a U-Haul and head for a place where she could relax for at least a little while. The haven she chose was Door County.

“I said life is too short, and this is where I need to be. I’m grabbing my kayak and my scuba gear and I’m moving to Door County,” she said. “So I just came up.”

Initially, Michelle worked at Pheasant Park Resort in Sister Bay, and she picked up a bartending gig at the 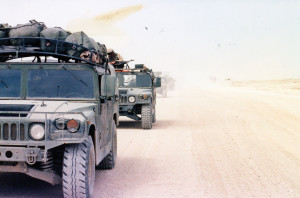 Bayside in Fish Creek to help fill the hours when she couldn’t sleep because of her PTSD. In her downtime, she escaped into Lake Michigan.

“My safe haven when I came home was scuba diving. It just kind of blocked everything. You could literally just sink to the bottom and swim with the fish,” said Michelle. 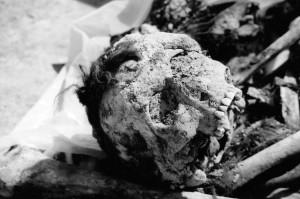 Michelle’s also the proud mother of two young daughters, Halyn and Keegan. And as the Director of

Marketing and Sales at the Door County

Visitor Bureau, she’s become responsible for marketing the county that took her in when she needed a breather. 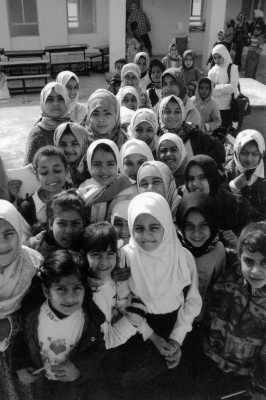 “She does a fantastic job with the kids, and she’s a full-time student, too,” said Bryan. “I try and take care of the kids and household and that lets her concentrate on her stuff more.”

“One of the reasons I joined the military is because it’s so fast-paced – and marketing is like that,” said Michelle. “Especially marketing Door County was

right up my alley. There’s something under every stone that you turn in the marketing world that might work or might not work and you’ve gotta try it out.”

She’s built an entirely new life for herself here in Door County, but it’s still not so easy to forget her past. What helps the most, she said, is her husband – “the calm in the storm” – and keeping busy with work, school, and family.

“You hope that one day you can experience it without experiencing it every day. You learn to live with it and seek the necessary help at the Veterans’ Center and the [clinic],” said Michelle. “But other than that, it was a part of my life. You learn to deal with it, and you grow. Every single day it’s gotten better.”