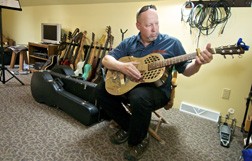 Fred Young strums one of his favorite guitars, a Johnson metal-bodied resonator guitar, in his recording studio. Photo by Len Villano.

Fred Young aka Tireless Fred Young of Sturgeon Bay has picked up a new hobby in the last few years, well a few hobbies…and a recording studio above his garage. The car mechanic, musician, and business manager for Thy Dirty Deuce perches on a foldout chair with his Johnson metal-bodied resonator guitar, slips a slide on his ring finger and strums a bluesy, soulful, twangy tune in the cozy studio featuring a row of various guitars, recording equipment, music magazines, a futon, and six inches of installation to stifle the sound.

“This is still a residential area,” laughs Young, who built the studio three years ago and has now created his own recording label and publishing company: Second Story Music, an appropriate title as it alludes not only to its location, but a second story of sorts in Young’s life.

The space has been utilized to record Thy Dirty Deuce’s latest album, Big Ol’ Sexy, Marybeth Mattson’s soon-to-be-release album, Relative Hunger, and Young’s soon-to-be-released album, Giving Back. An ironic title, as he contributes so much to Door County’s rich music scene, which he credits for his current passion and skill. Inspiration to purchase his first instrument, in his mid-40s, came after watching pat mAcdonald perform on a cigar box guitar.

“It stuck with me,” recalls Young, who bought a $50 cigar box guitar on eBay a few months later.

Instruction came from musician Adam Mackintosh, who traded lessons for vehicle repairs and van rentals from Young. “I wanted to learn something new,” says Young of picking up the guitar. “We wrote original music – that’s how I learned. It was a fast progression; I bought more guitars.”

He performed for a live audience for the first time at the formerly known Café Launch (now Mel’s Place) in Sturgeon Bay. “I played a song I wrote called ‘Long Red Letter,’” he recalls. “It was so scary!”

While learning guitar, he acted as a sponsor for Sturgeon Bay music events, including Steel Bridge Songfest. “I went from spectator to sponsor to musician and writer,” says Young, whose “main focus is to work with the [Dirty] Deuce.” 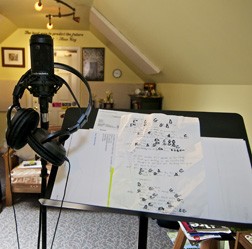 He met Thy Dirty Deuce, featuring Rev. Rob Atwood and Jamey “J-Dirt” Clark, at his 44th birthday party. “I asked Adam [Mackintosh] to play and he suggested Dirty Deuce – they play music mechanics like,” laughs Young.

Currently, Young is at work promoting the band’s new album, getting them more airplay, and a bigger booking agent, as well as operating his own business, Young Automotive.

“It pays for all the fun,” he smiles.

To learn more about Young, his recording studio, or Thy Dirty Deuce, visit http://www.2ndstorymusic.com or http://www.thydirtydeuce.com.