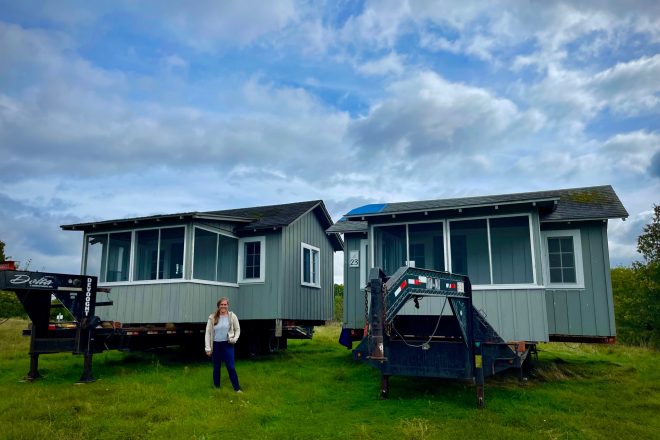 Paula Anschutz has received a crash course in home moving, zoning and building codes in her quest to turn the cabins of Little Sister Resort into seasonal housing. Photo by Myles Dannhausen Jr.

Paula Anschutz wasn’t looking to save a building when she drove past Pebble Beach to the old Little Sister Resort property in May. She was just hoping to find some gems to salvage from the deconstruction of the historical resort.

Four months later, Anschutz, the general manager of the Sister Bay Bowl supper club, is on the verge of becoming one of the few people to tangibly address the seasonal-housing issue in Northern Door.

The resort was bought last year by Lance and Bridget Crane, who plan to build their dream home on the waterfront portion of the property, as well as a condominium complex of 16 single-family homes on the east side of Little Sister Road. When Anschutz visited the site in May, crews were getting set to deconstruct the dining hall, home and most of the cabins to recycle the parts.

“As soon as I walked that property, I felt how tragic it was that these perfectly good houses were being torn down,” she said.

Anschutz, age 34 – part of the third generation of her family to operate the Sister Bay Bowl – knows how hard it is to find housing in northern Door County. She was able to buy a fixer-upper on Highway ZZ in 2018, but she has watched for years as her friends and staff have struggled to find their own homes and apartments.

She talked to the contractors at the former Little Sister Resort property to find out whether the buildings could be saved, only to find out that the Cranes were under contract with a recycling company to sell off the contents of the cabins, and then the wood, windows and other parts. She started calling friends, officials and other business owners to see whether something could be done.

The problem was that Anschutz didn’t know anything about zoning, housing projects or moving buildings. Worse than that, she was on a deadline. The Cranes’ project had already been caught in the gears of the village plan commission, and they weren’t looking for more reasons to slow down.

But what Anschutz lacked in development skills, she has made up for in persistence, persuading the Cranes to give her time to move the buildings, and picking the brains of everyone she can find to create a way to make her plan work.

“I finally met the right people and started gnawing away at it,” she said.

One of those people is David DeVooght, whose family has been moving structures since 1964, both in the Midwest and on the East Coast. He has helped Anschutz navigate the process and expand her vision of what’s possible.

“For Paula to stick through it and do all of this, it’s a big undertaking,” DeVooght said. “This isn’t easy for her to do. When she first got in there, those cabins were going to get torn down. It’s gonna be a lot of work, but when she gets them, she’s going to have a great project.”

Anschutz bought eight cabins for $34,000. They are now lifted and sitting on steel beams, waiting to move to her property in Liberty Grove, about two miles from downtown Sister Bay. She’s working on creating a conservation subdivision on that property and will combine four of the cabins into two.

Once Anschutz gets the units to the property, her work has only started: She’ll have to pour foundations, run plumbing and electric, and fix odds and ends on the cabins.

“I’m basically sinking my life savings into this,” she said as she wandered among the broken foundations of the resort. There was obvious fear and doubt in her voice, but also hope. If she’s lucky, the project on her land will cost a little more than $250,000. “It’s a lot,” she said, “but it’s a lot cheaper than building them new.”

When complete, at least four of the cabins will be used for seasonal housing at around $400 per month. The Sister Bay Bowl will get first dibs, but there will be room for those who work for other businesses as well. To make the finances work, Anschutz anticipates using one cabin for vacation rentals.

Unfortunately, that isn’t even the hard part of her project. A fourplex with eight bedrooms on the verge of the chopping block still stands on the Cranes’ property. When it had no other takers, Anschutz began a desperate search for a location to which to move it.

In August, the Village of Sister Bay agreed to sell her a parcel at 2390 Ava Hope Court for $50,000. The parcel is on village sewer and water, and the fourplex could provide beds for as many as 16 workers who could walk to a bank, grocery store and downtown workplaces.

But the two-story structure can’t be moved as easily as the cabins because it will require temporarily removing power lines – a costly endeavor – or chopping it in half and reconnecting it on-site, which is expensive as well.

A Partnership of Preservation

When the Little Sister Resort property was sold, one of the first things that Denise Bhirdo, chair of the Sister Bay Plan Commission, requested was that the new owners work with the Sister Bay Historical Society (SBHS) to see whether the old Dutch gambrel-style barn on the property, which dates to 1919, could be moved rather than torn down.

The SBHS has moved and preserved a complex of buildings at its Corner of the Past Museum, including old cottages from Liberty Park Lodge. The organization is also raising funds to build a new barn to serve as a history center for the organization’s growing collection of archives, exhibits and programs. However, after a lot of debate, the SBHS has changed course from its idea to build a new, $1.2 million barn to preserving and rehabilitating the Little Sister Resort barn to fill its need.

“This would be far better than what we had on the drawing board,” said John Fletcher of the historical society. “This would give us a home for exhibits, reconditioning and restoring artifacts, but also preserve a piece of history.”

The Cranes have agreed to donate the barn to the historical society, and they’ve extended the time line to allow for moving arrangements and fundraising on the part of the SBHS.

If the SBHS succeeds, it will help Anschutz save the housing fourplex as well. If the barn moves, it will have to follow the same path as the fourplex, and the SBHS and Anschutz will be able to split the estimated $70,000 cost to maneuver through the utility lines along the way.

The idea of moving a large structure such as a 103-year-old barn may seem daunting to most, but not to David DeVooght.

“The barn is in really good shape for the age of the barn,” said DeVooght, who has moved well over a thousand buildings. “It’s structurally sound. A move like that wouldn’t damage it.”

To move it, he would go across the land that was Bay Ridge Golf Course, then over Highway 42 before continuing down Fieldcrest to the SBHS property. It would take a day to cross the golf course, and part of another to move it at a walking pace down Fieldcrest.

But to do it, the SBHS needs to raise $300,000 to lift the barn, move it, build a foundation and run electricity and plumbing to it. The organization has established a fund at the Door County Community Foundation and has already raised about $40,000 toward the effort.

And if all goes according to plan, Anschutz’s impromptu visit to a demolition site will end up helping to preserve a piece of local agricultural history, save cabins from an iconic resort and provide affordable housing for dozens of local workers.