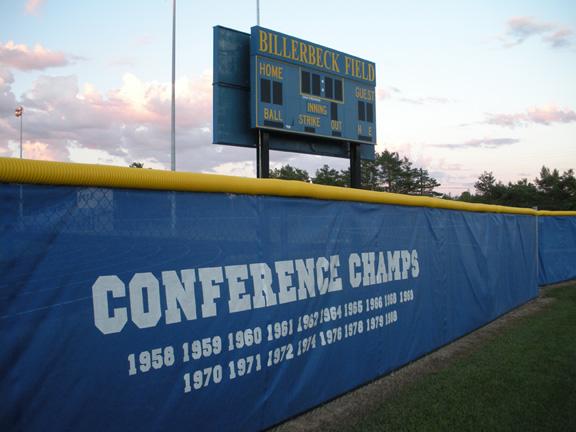 Gibraltar dedicated its baseball field to Rodney “Chief” Billerbeck in 1987.

The numbers are the first thing you notice, and how could you not? They pop off the page at you: 41 yeas as head baseball coach, 377 wins – a state record when he retired, 25 league or conference titles, and one state championship. 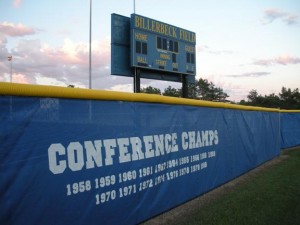 Gibraltar dedicated its baseball field to Rodney “Chief” Billerbeck in 1987.

I began the task of writing about the man responsible for all these eye-popping statistics thinking that it would be framed by these numbers. But over the course of talking to his former players, colleagues, friends and family, the numbers faded into the background. The story of the man, Rodney “Chief” Billerbeck, is not about his achievements, but about the impact he has on the lives that he’s touched.

“He would ride you, but you didn’t feel like you were being rode,” said former player Tom Staver. “He was always at the school, in the halls, poking his head into classrooms. He was there every step of the way with you, so he had everybody’s respect. You wanted to do the best you could do for him.”

Chief retired from coaching in 1990, and now lives in Sister Bay at Hearthside Cordial Care. Parkinson’s has slowed him some, but not his quick wit or his treasure trove of memories.

Asked what made him so successful, Billerbeck, like Staver, pointed to his omnipresence at the school., “I was the phy ed teacher, set up games after school, watched them all the way up, see. Today schools hire coaches outside the school, and that’s a big problem. I couldn’t coach once I stopped teaching, just couldn’t do it, see.”

Delmar Olson, class of 1963, said being successful for “Chief” was simple. “He worked you very hard and you did what you were told. If you screwed up, you were a dink. If you did it again, you were a super dink; if you just didn’t get it, you were a terminal dink.”

The echoes of his dink declarations still resonate through the halls of Gibraltar.

Billerbeck’s philosophy was simple, absent of flair or gimmicks. Asked how he got the players’ respect, he didn’t point to any aura or reputation, just a simple introduction.

“The first time we met I told ’em, ‘You’re gonna respect me, period.’”

Yet all of his apparent simplicity belied the talents and depth of a man who had some tricks up his sleeve.

“What surprised me most was when I found out he was actually a double major in history and biology in college,” said his daughter Sally. “Physical education, which he taught all those years, was just his minor.”

Others remember his twinkle-toes on the dance floor, or the heartfelt conversations about the future of a particular student.

Yet to folks around Gibraltar, he’s still the old coach, and a stern one at that. His demanding standards as a coach helped breed a generation of fathers and uncles who had little sympathy when their son or nephew came home complaining of a difficult practice. “You should have seen a ‘Chief’ practice,” they’d respond. Athletic codes weren’t a staple of high school sports in his day, and Billerbeck kept his code as simple as his coaching style.

“He was there to talk to anyone at anytime,” Staver said. “If you had to get homework done or were struggling in a class, he got you the help you needed, or sent you to the library from phy ed. It was never about him, he had no ego.”

Billerbeck said he took extra care to talk to and help the kids who were struggling with their schoolwork, and he’s not very fond of the special classes slow learners are put into now. “You tell them it’s something else, but these kids know what’s going on. They know they’re in these classes because they’re not as smart, and then they’re labeled all the way through school by everyone and themselves. I always thought they should be kept in with the rest of the kids and let them pick up what they can.”

Before coming to Gibraltar, he had led Cassville to four conference titles and his methods brought immediate success to his new team. Gibraltar was at or near the top of the standings in the old Peninsula Conference every year in the 1960s and 1970s as Billerbeck compiled a mountain of wins that towered over his contemporaries. Yet in those days of the single-class state tournament, his teams would eventually lose to a larger powerhouse school in the sectionals every year.

In 1978 the WIAA changed the format of the state tournament, separating schools into classes based on enrollment. Finally, after 22 years at the helm, Billerbeck and Gibraltar got their first state championship in 1979, defeating Spencer 8 – 4 for the title.

This year marks the 25th anniversary of that victory, and it remains the school’s only team sport state championship. Yet Billerbeck said that team was by no means his best. With the talent he had at the time, and if the new format had been in place sooner, he said his teams could have won titles throughout the 1970s.

Pat Spielman taught alongside Billerbeck for the better part of 28 years. He coached football and served as Billerbeck’s assistant at times, which he called “the best years of my life.”

“He drove kids hard but fairly, and he had this personality that just attracted the kids to him,” Spielman said. “When other teachers would talk amongst themselves in the halls or in the teacher’s lounge, he would be talking to kids.”

The “Chief” legend at Gibraltar includes tales of him playing ping-pong and badminton with the kids at noon hour. It also includes some humorous misunderstandings at other gyms, such as the time Billerbeck filled out his non-conference basketball schedule with a game on the Menominee Indian Reservation. Playing the Native American team with the stands full of their fans an parents, his players would get a lesson in political correctness.

“I was a chief gunner’s mate in WWII, see, and when I got out of the army, everybody still called me ‘Chief.’ My players called me that too, and I liked it, and actually insisted they call me that. ‘Chief’ is short and simple and it took some of that distance away from me and the kids. So they’re all yelling at me from the court or in the huddle, ‘Hey Chief!’ Finally somebody came up and told us we might want to watch it with the Indian stuff on the reservation. We hadn’t even thought about it.”

As Spielman praised his friend, he never mentioned wins or losses or titles, he just kept coming back to his dedication and how much he cared for his students and players.

“Dedications seems to be a pretty shallow word for what he did,” Spielman said. “He went out and got a license to drive a bus so he could take his players to games and tournaments. He was always talking about his students, what kind of contribution is this kid gonna make in society. I don’t think Gibraltar realizes how fortunate they were to have him.”

In 1987 Gibraltar’s baseball field was renamed Billerbeck Field in his honor, and Billerbeck thanked the school by bringing home one last Packerland Conference Championship in 1988. To this day it’s still the only conference title earned by a Gibraltar team in football, baseball, basketball or volleyball since joining the Packerland in 1984.

He says he doesn’t miss his coaching days.

He noted that his ways might not mesh with modern times.

“You probably couldn’t getaway with the nicknames, with the rules, and pushing ’em hard. Kids are different, but really the parents have changed.”

Four decades of students as Cassville and Gibraltar feel fortunate that they were schooled in a time when things were different, before so much had changed.