While most people’s definitions and goals of sustainability vary, one concept seems to be at its core – to achieve human and ecosystem longevity and well-being together. To this end, attaining well-being for people and ecosystems is just as important as reducing ecological stress and environmental impacts. 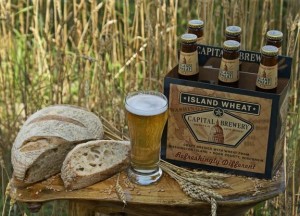 Brian Ellison, owner of Death’s Door Spirits, has accomplished this comfort with a little help from his friends. Three friends, actually – a vodka, a gin, and a white whisky. As part of Washington Island Brands, a company that works to create and find markets for value-added products that originate on Door County’s Washington Island, Death’s Door Spirits is a model for what really is at the heart of sustainability – the connection of people to a product.

Ellison grew up in Illinois, but spent many a summer vacation in Door County, camping in Peninsula State Park, making the ferry trip over to Washington Island.

“Because of my last name, I have many photos of my family and I standing next to the ‘Welcome to Ellison Bay’ sign,” he laughs. He left the Midwest when he was 18, and after college at the University of Georgia, traveled all over the United States – and the world – for the sake of work. He and his wife were living in Barcelona when he stumbled upon an opportunity to work for Vandewalle & Associates, a Madison-based company that helps communities with land-use decisions. 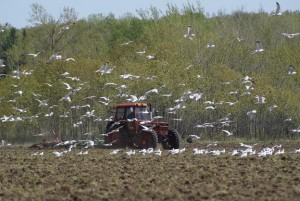 “Brian Vandewalle (founder of Vandewalle & Associates) had purchased the Washington Island Hotel & Culinary School, and was developing that with Chef Leah Caplan,” Ellison says. “When we got back to Wisconsin, we really wanted to visit Door County, and Brian had told us to go up to the island and visit the hotel.”

There Ellison met with Vandewalle, who told him of his plans for the Hotel and Washington Island Brands.

“He wanted to create a model of agricultural sustainability on the island,” says Ellison, “and he wanted to grow wheat. He wanted to make the best flour in the United States.”

Ellison admits that he didn’t understand Vandewalle’s dream at first.

“I didn’t mean to be as blunt about it as I was, but I just blurted out, ‘who cares about flour?’” Ellison laughs. “So Brian turned to me and said, ‘Well, what do you think we should do?’ and I said, ‘I think we should use the wheat for beer and vodka.’ By the end of that evening, we were business partners in Death’s Door Spirits.”

The reason for using the wheat for beer and spirits appealed to Ellison. “If we were going to grow wheat, I wanted to use it for a product that people would indulge in. I thought to myself that if I was going to buy a vodka, or a craft beer, I would rather buy a product that had a story, a product that was supporting a community, rather than a ‘cool’ product that I had found out about through a bunch of strategic marketing by a large corporation.”

Although Ellison and Vandewalle planned to use the wheat for spirits and craft beer, the wheat being harvested on the island was already used to supply flour for the Washington Hotel, Restaurant & Culinary School. The first year on the Island, Chef Kaplan had asked brothers Ken and Tom Koyen to plant 30 acres of wheat so they could use it in the restaurant’s signature wood-fired brick-oven breads. The first wheat harvest yielded more wheat than the Hotel could use, and that was when Kaplan, Vandewalle, and Ellison approached Madison-based Capital Brewery to see if they might be interested in using the island wheat for a wheat-based ale.

Right away, Ellison could see that this partnership was about so much more than just selling a product.

“Everyone wanted to work together to make it happen,” he says. “Most growers usually want to sell their crop and move on, but the Koyens wanted to be involved. Washington Island Brands really started to embody what I thought of when I thought of the term ‘sustainability’ – kind of a ‘triple bottom-line’ of economics, environments, and relationships. The fusion of these three things really served as a catalyst for what was to come.”

What culminated was the release of Death’s Door Vodka and Death’s Door Gin in January and June 2007, respectively. Ellison said while he was proud of the spirits Death’s Door had produced, he wanted to make sure that it was the best spirit being produced.

“So many artesian spirit brands simply love the idea of being a small business,” Ellison said. “We wanted to be small and regional, but we also wanted to be exceptional. I mean, if you’re going to sell it to your neighbors, it has to be good, right?”

The vodka is made entirely with island wheat, and the tasting result is a sweet, wheaty bouquet, with flavorful middle notes and a clean finish; the gin is made from a combination of island wheat, wild, hand-harvested juniper berries, and other Wisconsin-grown botanicals, and the tasting notes are a combination of juniper, coriander, and a crisp, clean finish of fennel.

With both the Death’s Door Gin and Vodka selling beyond expectations, Death’s Door Spirits released Death’s Door Whisky in March of 2008. The whisky is a white, or un-aged whisky, which means it has not been aged in wood barrels for an extended amount of time. It was meant to be a “pre-release” for their aged whisky, which Ellison estimates will be available just in time for the 2009 holidays. “Because the aged whisky will be available next year, the batch of white whisky was only 900 bottles,” says Ellison. “It was kind of a ‘when they’re gone, they’re gone’ kind of thing. We didn’t expect it to sell out to our distributors in three days.”

Ellison points out that one of the main reasons for the success of Death’s Door Spirits is that – simply enough – the brand is “real.” “I can go into an office of a Chicago liquor distributor and tell them exactly what wheat fields their batch of gin came from. I can show them pictures of the Koyen brothers on my cell phone. People like having that ‘from the ground to the glass’ connection – and putting together all of those connections are what ultimately creates the value of a product.”

While Washington Island Brands and Death’s Door Spirits represents a significant sustainability food movement both for Door County and Wisconsin, it is not the only food movement happening in the state. “I’m proud of our state,” says Ellison. “Growing local is huge in Wisconsin right now. The Wisconsin Department of Agriculture has been working hard on a ‘Growing Wisconsin Agriculture’ initiative, and they’re working directly with farmers to make this happen. Chef Kaplan from the Washington Island Hotel is the founder of Homegrown Wisconsin, which is a cooperative of organic farmers who raise vegetables, fruit, and herbs for gourmet restaurants in Wisconsin and Illinois. So many of my friends and colleagues are eating 100-mile diets – they only look for food or drink that has been produced within 100 miles of their homes. It’s exciting to see people wanting that kind of connection with what they put in their bodies.”

Even with the recent economic downturn, Ellison is confident that Death’s Door Spirits will continue to appeal to the public. “We aren’t the least expensive product out there, but we are keeping our money in the local economy. It’s a Door County brand, and that means that Door County will reap the benefits.”