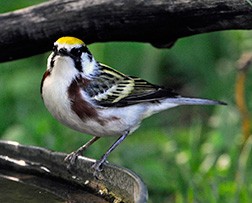 The Chestnut-sided Warbler is a nesting species with an easily recognized song. The cadence is similar to someone saying, “Pleased, pleased, pleased to meet you!” All photos by Roy Lukes.

I shall forever be thankful to my dear Mother for developing in me a deep interest in birds. We moved into our new brick home on Wisconsin Avenue in Kewaunee in the summer of 1933. Soon my dad had his constantly growing garden started, and it was along the gently sloping grassy lawn west of the garage, leading to the south part of the garden, where my mother would take my two older brothers and me to sit quietly and watch the Killdeer that had decided to nest in the pea patch no more than a dozen feet from where we sat.

Through those early years my Dad introduced many trees and shrubs to the double-lot property, making it into a virtual mecca for birds. Kewaunee, located along the west shore of Lake Michigan, has been a heavily traveled corridor for songbird migration through the years, and it was there I developed my deep interest in warblers, which has grown steadily during the past 60-plus years.

It’s wonderful that the upper Midwest didn’t experience two bad spring warbler migrations in a row. Even though the slow warming of the weather and leafing out of the deciduous trees in recent weeks appears to be quite similar to last year, the warblers have been coming through in surprisingly good numbers. Postings on the Wisconsin Birders Network, a free email chat room, tell of many warbler sightings, some very early, throughout the state.

The untold millions of tiny midges that appear on the scene as the foliage begins to develop become the primary food of the migrating flocks of warblers. There is plenty of food to be had, and finally the warblers are arriving in veritable waves.

It is a well-accepted fact that a lot of people, including some birders, don’t get overly excited about the warblers. In the first place, they’re so small and fast moving that it can be downright difficult and frustrating to get a good look at them. And secondly, once you do get them in your binoculars or spotting scope, their accurate identification doesn’t come easily.

Noted bird artist Francis Lee Jaques, whose primary interest in birds centered on large species such as ducks, geese and swans, once remarked, “The difference between warblers and no warblers is very slight.” And as a magician would say, “Now you see them, now you don’t!” It can be downright maddening how fast those little squirts can move out of one’s sight!

This Golden-winged Warbler shows either fright or disturbance by its puffed up yellow crown feathers.

At least 54 species of these small, flighty, difficult-to-identify birds nest north of the Mexican border. In fact, about one-half of the bird population of Canada’s vast evergreen forest is warblers, and the bird of prey whose diet consists mainly of warblers, upward of 90 percent or more, is the Sharp-shinned Hawk.

May 13, 1961, Mother’s Day, went down in my field notes as an extraordinarily wonderful warbler day in my folks’ backyard in Kewaunee. Of greatest importance was being with my Mother on that special day, and secondly, the warbler wave was on, as bird students would say. Tiny tree leaves were just unfolding, the air was warm and tens of thousands of gnats (or possibly midges) were hatching, providing food for these birds in the trees, shrubs and on the ground.

I can recall, as vividly as though it were yesterday, seeing my first male Black-throated Blue Warbler – not one but three or four. They fed on the insects quite low in one of the large Norway Spruce trees in my parents’ backyard and allowed us to get within eight or 10 feet of them. At the end of that remarkable backyard birding day, our list included 19 species of warblers in addition to about 40 other species of birds.

Many experienced birders in Wisconsin dedicated large amounts of time during a six-year period (1995 to 2000) to document all of the breeding species of birds in Wisconsin, a project that culminated with the publication of a very detailed book, Atlas of the Breeding Birds of Wisconsin. Charlotte coordinated the studies made in Door County. The awesome-in-all-aspects Atlas was published and is for sale, now at a reduced price, through the Wisconsin Society for Ornithology, and Charlotte has now begun helping in another five-year study with many other participants to update the breeding birds of Wisconsin.

Here a Yellow-rumped Warbler reveals its namesake color, which is often hidden by the closed tail feathers.

In addition, two species of warblers were considered probable breeders, the Golden-winged and the Northern Parula. The Cape May was confirmed at the north end of Newport State Park when there was an outbreak of the Spruce Bud Worm, a favorite food of this species. The Cape May usually nests in far northern Wisconsin.

One question that we have received on several occasions is whether it is possible that different species of these tiny warblers have crossbred and produced hybrids. Interestingly there are two species, the Blue-winged and the Golden-winged that actually do occasionally mate with one another. One hybrid offspring is called Brewster’s while the other is referred to as Lawrence’s Warbler. The latter is the rarer of the two. Many summers ago our early morning birding groups watched a Brewster’s Warbler on several occasions.

Someone once asked us during spring bird migration if we were seeing any new warblers for a change. Oh yes, we replied. We’ve located a brand new hybrid warbler that resulted from the mating of a Nashville Warbler to a Tennessee Warbler. It’s called the Nashville-Tennessee Warbler and sings nothing but country and western! (Charlotte just ordered me to go to my room!)

Those of you birdwatchers interested in learning more about the challenging but alluring warblers will want to obtain the excellent Peterson’s Field Guide to Warblers, published in 1997. It contains superb color photographs and is brimming with fascinating and helpful information about one of the most wonderful groups of birds in the world!