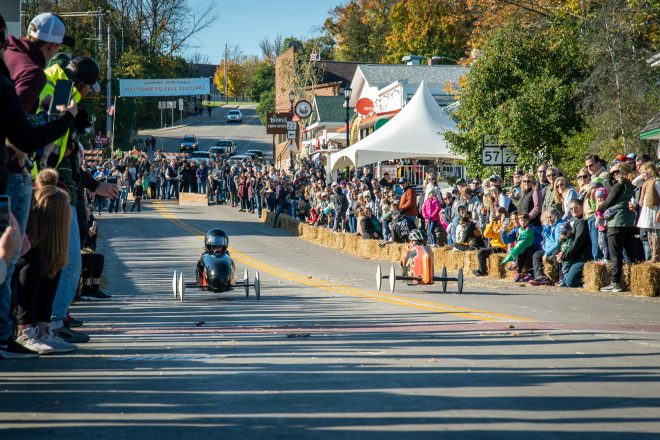 Racers speed down the Sister Bay hill for the first time in nearly 20 years during the 75th Fall Fest. Photo by Rachel Lukas.

It will be a hotly contested battle in the second year of the revamped Fall Fest Derby on Sunday, Oct. 16.

Following a two-decade hiatus, the derby returned in 2021 with six competitors. This year, it will feature 24 cars. The race for kids ages 7-13 driving gravity-powered vehicles down the hill takes place Sunday at 10 am, with racers taking their spots on the ramps in front of Spot to speed down the hill.

The growth of the derby marks a return to the roots of Fall Festival. The derby races were part of some of the earliest celebrations, but the previous incarnations may not have been quite as safe. Cars once flew down four-foot ramps in front of Husby’s, with no barrier between the racers and onlookers.

This year’s race will feature a straw-bale–lined route, smaller ramps and a starting line placed a little farther down the hill. Registration for the 2022 event is full. The pre-race weigh-in begins at 8 am.