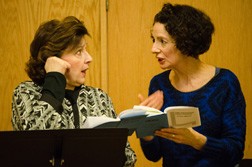 Marilyn Bogetich and Carmen Roman perform the roles of Mary and Margaret two sisters who set off fireworks while entertaining an evangelist in The Savannah Disputation.

Vinkler announced to the crowd the next play on the Players play reading schedule is Two Story House by Kathleen Thompson. Two Story House explores the lives of two couples who share the same house, but haven’t met because they live in an alternate universe. Their worlds collide when one of each couple start to catch glimpses of the other and they start explore who and how we love in the face of impossibility.

The reading of Two Story House will held at Björklunden on April 7 at 7 pm. The Peninsula Players 2014 schedule of plays may be found at peninsulaplayers.com.