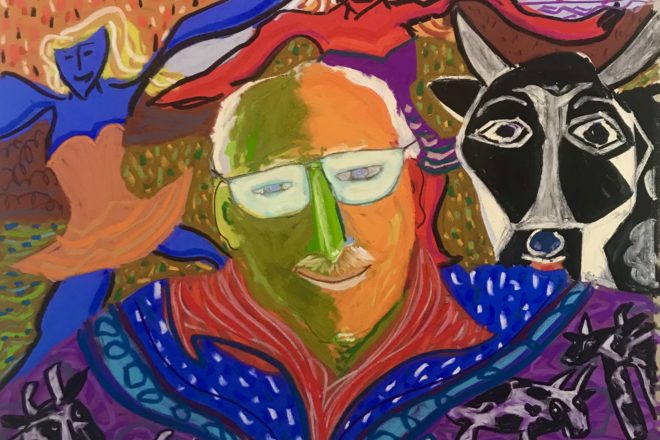 “Schomer and Friends in Pastel” by Mike Judy.

This month’s shows at the Miller Art Museum, 107 S. 4th Ave. in Sturgeon Bay, are just plain fun. The work of six featured artists, plus work by Gerhard CF Miller, play together nicely with sometimes surprising echoes of subjects and styles.

Craig Blietz’s cow paintings have some company in the work of Schomer Lichtner (1905-2006), who painted cows and Milwaukee Ballet ballerinas – often together. The cover of a book about Lichtner, In the Moment from the Museum of Wisconsin Art, shows a ballerina, arms outstretched holding bouquets of roses, sitting daintily atop a cow.

He captured both subjects with equal skill.

Mike Judy, who was a friend of Lichtner, shares wall space and an eclectic zaniness with Lichtner. In a portrait Judy created of Lichtner, the older artist is depicted with a dancer on one side behind him and a cow on the other side.

Both artists paint freely – with broad swaths of bright color, but also fine detail – and both make good use of geometry. Did cows ever come in triangles, or have sailboats ever had such triangular keels and sails?

Lichtner’s “Seven Chicks Piled High” is just that, and Judy offers “Smoked Fish”: a fish with a cigarette dangling from its mouth.

The back gallery has a large selection of Judy’s portraits and some of Lichtner’s paintings from the 1930s, such as a Milwaukee coal dock at night with billowing steam in one corner and a lit-up industrial building behind piles of coal.

Lichtner’s “Diagonal Ballerina” places the dancer against a blue background with the graphic boldness of Matisse’s cutouts. In another painting, he echoes the flower-arrangement works of Franne Dickinson – around the corner on the Miller’s mezzanine – with his own styled bouquet: a framed image of a dancer left of the flowers and a similar-sized framed image of a cow on the right.

Dickinson, now 94, is famed for her flower paintings, and you can see why: The blossoms have a life of color all their own. But “Orchard, Plein Air” opens with bare tree limbs in orange with touches of white, while the distant orchard trees have smudges of purple for foliage. And then, in a complete departure, there are three paintings of women of Darfur in colorful Sudanese clothing.

Across the way on the mezzanine are five works by Ephraim artist Karsten Topelmann, who died recently. (His Hanseatic Gallery in Ephraim will be selling his remaining work.)

The selection starts from the stairway with a Bavarian church interior, bursting with light and color. There’s also a view of the Alpine Lodge through birches, and a beach scene with cliffs coming down almost to the water – though in Tenerife, not Door County, which is a reminder that this German native and his German painter wife, whom he met in Chicago, traveled the world during their artistic lives.

Topelmann’s enjoyment of life is suggested in two paintings of table settings with elegant glassware, including champagne tulips depicted with the lightest of touches.

And don’t miss the small display of 15 graphite sketches by Roy Mason, Miller’s mentor and friend. You can see the influence when you get to the back gallery of Miller’s own work in graphite, watercolor and egg tempera.

Curator Helen del Guidice put the show together and said Judy was so pleased to be showing with his old friend Lichtner that he painted his portrait with cows and dancers specially for the exhibition.