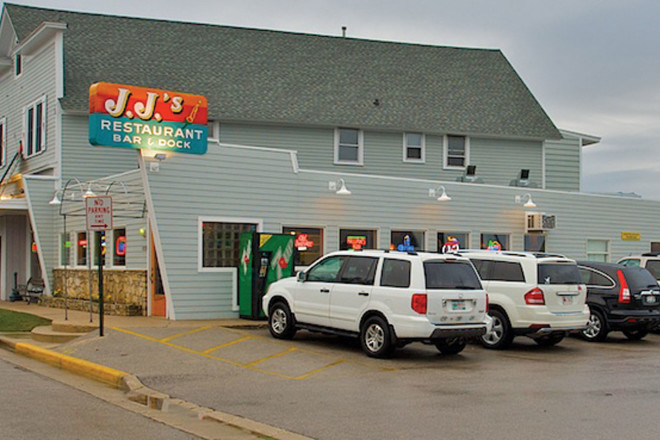 For me, JJ’s/La Puerta is the closest I’ll ever come to Cheers:  when I walk in, I usually know the names of many of the customers as well as staff, and vice-versa. If I order a margarita, Dave knows to make it “on the rocks with no salt,” or, if I order the Mexican beer Tecate, he wordlessly hands me the sippy cup of hot sauce to dribble on the can as I drink it. Erin and Deb know that whatever I order, I want the vegetarian version. It is one of my favorite restaurants and bars in Door County due to the fun, casual, familiar atmosphere, and because the food is consistently great and plentiful and the service fast. (Once you manage to get a seat, that is – they’ll serve 500-plus people on a busy summer night.) And, I’m pretty sure I’m not the only local that feels this way:  the night I stopped in to “conduct research” for this article, the owners and/or managers of the Sister Bay Bowl, the Mission Grille, and T. Ashwell’s were all in JJ’s/La Puerta eating dinner, chatting with each other and the staff.

JJ – or James Johnson, although I suspect he wouldn’t even answer to James – started the original JJ’s in 1978. Housed in the northerly portion of the current Sister Bay location of the restaurant, it had a basic but tasty menu reliant on burgers, fries, and shakes (all of which are still available today). Before JJ’s, the space had been a couple of different restaurants, including Lhosts’ Dining Room, Eileen’s, and Rudy’s, a bakery and coffee shop in the ‘50s (the original restaurant in the building). JJ recalls that when he started JJ’s, “there was a beauty shop in the building next door, Hammersmith TV and Radio was located in the southerly portion of the current restaurant [which became the original La Puerta], and the other restaurants in Sister Bay at the time were Al’s, the Carroll House, Johnny’s [now the Sister Bay Cafe], the Bowl, and the Patio.” He jokes, “Yeah, I was going to open a Swedish restaurant, but there was already one in town. No goats, no grass, no relation. I had a t-shirt that said that.”

JJ moved to Door County from Viroqua, Wisconsin. He explains, “I was teaching school in New Berlin, and my roommate was from Sister Bay; so I started coming up here with him to hang out. After about three years of teaching, we decided we were quitting and coming up here. This was about 1973 or so. We lived in what is now the Clay Bay Pottery shop those first few years, and during the summer had a pottery shop across the highway called Kiln Door that sold mostly my stuff – I was an art teacher – and we also ‘shook cherries.’” JJ says he “just kind of stayed up here,” keeping busy with a variety of other jobs those first years – such as bartending (at the English Inn, then called the Parkway) and running a sandwich shop (in Fish Creek at the Alibi dock) – a story and résumé of a sort familiar to many year-round residents. 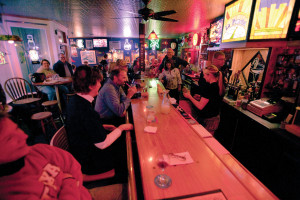 JJ recalls that he and Kristine had a candy store in the southerly part of the building for a while – called the Good Ship Lollipop – but quickly realized they didn’t want to do that any more. “I was into Mexican food, even though we hadn’t started spending a lot of time in Mexico yet at that point, and we’d been having a Mexican night in JJ’s once a week that was really popular,” he says. “So, in 1985 we added another restaurant next door, La Puerta [Spanish for “the door”], serving only Mexican food.” JJ notes that the two restaurants shared a kitchen, although the menus were totally separate:  if you were at La Puerta, you could only order Mexican food, and if you were at JJ’s, you could only order off the JJ’s menu. The two eventually combined into one restaurant with one menu in 1989, much to the relief of customers, and probably staff, although the public spaces of the two restaurants were still separated completely by an internal wall until around 1997.

Over 30 years after the start of their first successful venture, JJ and Kristine have opened a second JJ’s location in Jacksonport. JJ claims, “That was not a planned operation! I went to a restaurant equipment auction sale and ended up with a restaurant. I went with no intention of buying a restaurant, but the bids opened so low I raised my hand, and then I looked around and no one put in another bid after mine!” The Jacksonport location has an atmosphere and menu similar to the Sister Bay location, both of which are sure to guarantee its success.

The timing of the opening of the Jacksonport restaurant in August 2009 is eerie, in retrospect, as a few weeks later a fire in the kitchen of the Sister Bay location forced JJ and Kristine to close that restaurant for six months. JJ notes that “the entire building was taken down to the studs and reframed, new carpet installed, anything that was smoke-filled was replaced or cleaned, etc. It was a mess.”

Fortunately for all of us, if you didn’t know about the fire, you wouldn’t even notice anything was 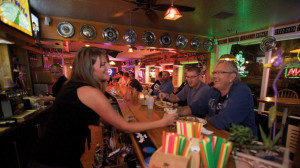 different – it still looks, feels, and tastes like the same old JJ’s. And now, we’re lucky enough to have two locations to visit.

JJ reminisces about “all the marriages that happened out of here,” including bartender Dave and his wife, Chandra, who used to wait tables at JJ’s.

Dave recalls “the night Ivan Bridenhagen carried me behind the bar like a baby all night as I was serving drinks. Customers didn’t know what to think. Oh, and, Dick Daubner’s 50th birthday party [the Daubner family owns the Sister Bay Bowl]. You probably can’t print a description of the costume his family made him wear, but he had this hilarious costume and played his polka cello all evening for everyone. I also like it whenever we have a band – you can always see JJ dancing with people, and that’s always entertaining.”

Personally, my favorite memory of JJ’s isn’t one specific instance, but rather the image that comes to mind of JJ hanging out behind the bar in a t-shirt – even in the winter – having a cup of coffee. I always think customers that don’t know him are probably wondering, “Who is this surfer dude, and why isn’t he taking my order?”

An enormous list of Northern Door residents, past and present, have worked at JJ’s over the years, including many of my good friends. Besides eating at JJ’s as a kid, my earliest memories of JJ’s are from Rachel Manek (yes, the Rachel of Green Bay FOX 11’s Good Day Wisconsin), whose first waitressing job our first summer living in Door County was at JJ’s. Rachel lived in fear of one of the line cooks at JJ’s, who had made it her life’s mission to torment the young and inexperienced waitress. Rachel also lived in fear of her coworkers at the Hotel Du Nord (her second of three jobs that summer), who would show up for her JJ’s shifts and sit in her section and order milk shakes in every flavor, which they knew the wait staff had to make. Although Rachel’s stint at JJ’s only lasted approximately 30 days, the experience couldn’t have been too terrible, as she still happily visits JJ’s/La Puerta for dinner and drinks.

JJ and Kristine have four children, three girls and one boy, all of whom worked in the business growing up (and had or have menu items named after them). Their son, Jesse, is in the restaurant business himself, as the head chef of the Waterfront (right next door to JJ’s/La Puerta in Sister Bay).

JJ tells the following story about the “house shot”:  “We didn’t get our liquor license until La Puerta had been open a few years; people were always upset those first few years that they couldn’t have margaritas with their Mexican food. Once we finally got our license, we started serving tequila shots the way most places do, with a lime slice and salt. Then, shortly after we’d gotten the license, a friend’s brother-in-law visited from Germany, and he told us that in Germany they did tequila shots with cinnamon and sugar on an orange slice. The guy’s name was Bernie, so we named the shot after him and it’s been our house shot ever since.” 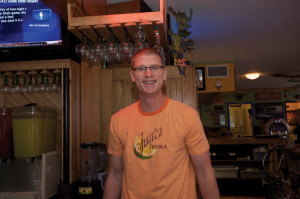 Bartender Dave Johnson (no relation to either JJ and Kristine or the Johnsons with the goats on the roof) has worked at JJ’s/La Puerta for 17 years. He looks at me like I’m an idiot when I ask about the most popular drink, but then responds, “Regular margaritas. By far. I’ll go through anywhere from three to six of these huge regular margarita mix containers before I go through even one strawberry mix.”

Dave also notes that the restaurant carries 30 to 40 different tequilas, many of which would be considered “sipping” drinks rather than shots or mixers. In addition, the evening I’m there researching, wine aficionado Tonda Gagliardo (of the Mission Grille) hesitantly asks Dave about a glass of wine, and he astonishes her with the option he presents. “Who knew JJ’s had good wine?!” exclaims Tonda, thanking and calling Dave “Bartender Extraordinaire.”