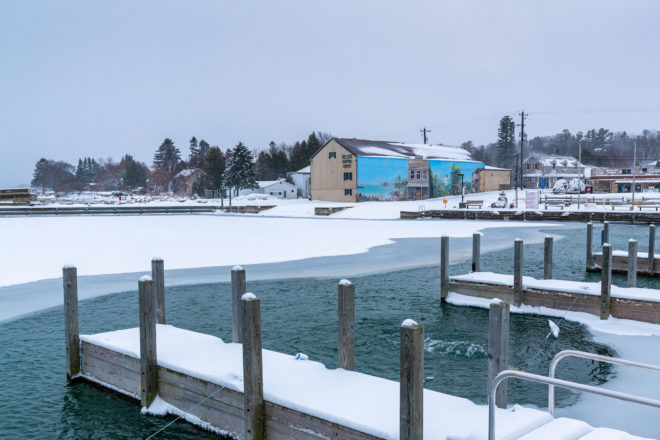 Eight months after Baileys Harbor residents authorized the town to buy the former Nelson’s Hardware store property, private citizens have raised nearly $1.1 million to help fund the purchase of the property for redevelopment into an open, public green space.

The Baileys Harbor Open Space Preservation Fund has raised $1,075,000 – only $25,000 shy of the $1.1 million goal. The fund is administered by the Door County Community Foundation, and its board members are David Eliot, Paul Salm, Carrie Baldwin Smith and Dave and Sally Smith.

Donations both small and large have helped fund the future project that town residents overwhelmingly approved last year as a way to improve the town’s quality of life now and for the future.

“We were excited to contribute to the fund to help preserve and better Baileys Harbor – our home – not only for today, but for generations to come,” said two of the donors, Dave and Sally Smith.

The highly visible, waterfront property along Baileys Harbor’s main street on Highway 57 served the town for decades as a hardware store. Hemmed in by zoning regulations that prevented expansion, second-generation owner Gary Nelson was forced to close the store in 2016, consolidating into his Fish Creek location. The adjacent motel property was turned into long-term rentals, but the main building with the distinctive painted mural on its side, next to the Baileys Harbor Town Marina, has sat empty and silent ever since.

“I think the heart of the town is something a lot of people care about,” said Eliot, a Baileys Harbor resident and co-owner and publisher of the Peninsula Pulse. “Everybody who gave to the fund wants to open it up and preserve that space, as opposed to condos or tall buildings casting shadows on the downtown. That’s what we’ve heard.”

The idea to buy the Nelson’s Hardware store building and adjacent motel property and garage and develop it into a community space came from Eliot while he was serving as Baileys Harbor Town Board chair in 2020-21. Town residents voted 255-32 in April 2021 to support the purchase for $1.95 million. Eliot then established the fund to create the public-private partnership between citizens who care about preserving and investing in the town, and the public funds and resources of the town itself.

“I believe that municipalities can and should partner with their communities to find a way to preserve open spaces whenever possible,” Eliot said. “My great-great uncle founded the first land and conservation nonprofit, and he believed that it was ‘our responsibility to preserve for … all the people … these scenes of natural beauty which, by great good fortune, still exist.’ Public access and view of the lake in the middle of downtown Baileys Harbor is an opportunity for us to create an open space for all to use and see.”

Donors to the fund benefit by helping to preserve and invest in the town through tax-deductible contributions, and in turn, the town is able to afford the purchase and redevelopment without placing the entire tax burden on property owners. The fund will finance $600,000 of the purchase – it has already paid the down payment – and $500,000 for the future redevelopment. The fund’s dollars are pledged over five years and not in hand all at once: a model that enables it to pay over the next five years, as per the town’s purchase arrangement.

If money is raised in excess of the goal, a secondary benefit is that an  endowment will have been created for the community.

“It can be used to maintain that property over time, or used for other properties for preservation of open space and open-space maintenance, as long as the first goals are accomplished,” Eliot said.

This committee has already solicited Requests for Qualifications, a process that allows it to prequalify potential design firms. Eight responses, all from Wisconsin companies, were received by the Dec. 21 deadline.

The committee was scheduled to review those submissions Jan. 6 – after the deadline for this issue of the Pulse – with a goal of selecting three that would then compete for the opportunity to create a master plan during the Request for Proposals (RFP) stage. The committee intended to send its recommendation and a draft RFP to the town board this month for its consideration.To find more information, visit baileysharboropenspace.org.