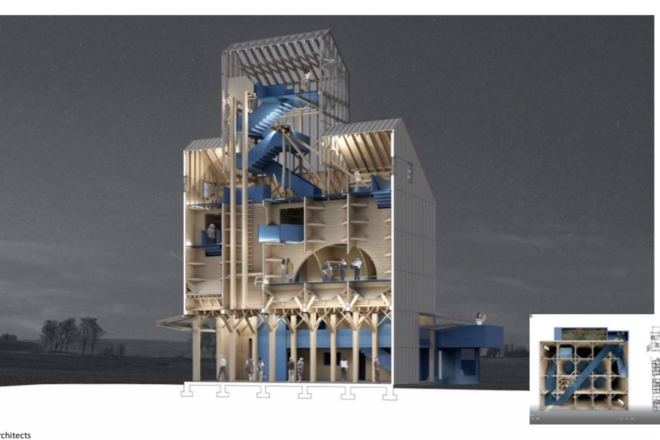 A cross-section perspective inside the building shows grain bins on the second floor that will be carved out to create space for small meetings or concerts. The 40-foot-wide by 50-foot-long, old-growth, nail-laminated timber has been preserved and divides the interior into 20 vertical grain bins, each 10 feet square, raised on columns. An addition will be constructed – the outline can be seen behind the building – to house the public restrooms, catering kitchen and office space.

Jim Janning of Sturgeon Bay approached the podium during a Sturgeon Bay Common Council meeting last month and told the alders that he and his wife, Donna, built a house in Sturgeon Bay in 2000 after coming to Door County for one weekend.

“We came here as adults and immediately fell in love with it,” he said.

For the Jannings, “Door County is Sturgeon Bay,” Jim said, and their love for their adopted home has only grown during the past 20 years as they’ve watched the public and private improvements on both sides of the shipping canal transform the city.

One project – the Door County Granary project – particularly captured their interest and hearts for its ability to preserve the strength-lending, character-giving history that defines Door County and its many villages and towns. So they donated $250,000 toward it.

“It’s the largest contribution we’ve ever made to a project,” Janning said.

They also joined the Sturgeon Bay Historical Society Foundation’s Granary Project Fundraising Team and are key members who are helping to raise some $3 million for the first phase, which got underway Nov. 18 and will be finished by June 1, 2022.

The Jannings were early donors, and it’s that first-up support that “helps make it happen,” said Beth Renstrom, executive director of the Granary project. “It takes a lot of courage to do this and the willingness to say, ‘This will happen.’”

Project organizers have raised about half the money for this phase, and they’ve recently kicked the fundraising up a notch through the generosity of two anonymous donors. One gave $100,000, another $20,000, and with those contributions, the Granary Project launched a match challenge up to $120,000.

“If people are going to give, it will double their contribution,” no matter the size of the donation, Renstrom said.

She said donations are coming from people across the country who have ties to Door County.

“And we’re seeing money invested in Sturgeon Bay that maybe wasn’t before – from Northern Door and Green Bay,” Renstrom said. “It’s a project that’s resonating beyond just the local community. In 20-30 years, there’s not going to be any of these [granaries] left.”

Communities that are still home to a historical granary may not have the ability or resources to repurpose the structure, or they may turn it into a restaurant or some other project, while the Door County Granary will be fully interpreted.

“Our focus is to create a living museum of our history: of agriculture along with maritime,” Renstrom said. “That’s what built all these little towns in Door County and gave us this unique character we have.”

The Granary will also serve as a public facility for the community, housing public bathrooms and gathering spaces for holiday markets, weddings, family and class reunions, as well as lectures, and other classes, pop-up art installations and theater events.

Despite the public venues, the project will be 100% privately funded.

“We occasionally hear people talk about their tax dollars being used to fund this, which is completely false,” Renstrom said.

The donation-match campaign will continue until the $120,000 match amount has been raised.

“We’d love to see it happen before the end of the year so people can take care of their tax-deductible donations,” Renstrom said.