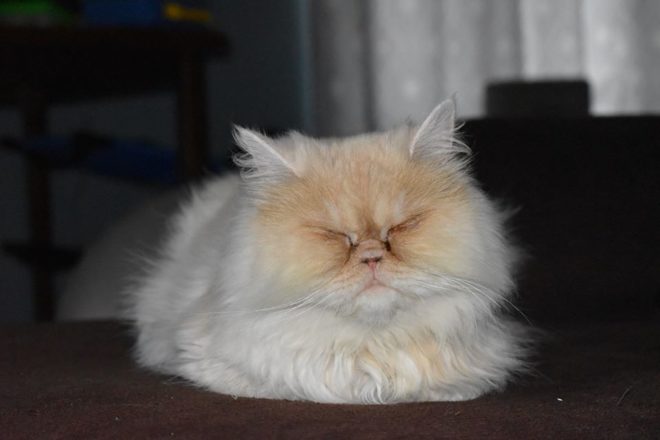 I’ll never forget the day when a coworker in Elkhart Lake, Wisconsin, told me that her dog’s name was Lisa. I lost it. I was unable to control my laughter for the next few minutes. Maybe even the next hour. I still laugh about it now, years later.

There’s something about pets with human names that always seem to generate a chuckle. But funny pet names don’t end there. We asked you, our readers, for funny pet names and the stories behind them, and boy, did you respond! Here are some of our favorites:

Our daughter, Emma Pahl, loves to train her cats with treats, and they have tea parties. She has named them all – Snap, Rainbow and Wally – and they sit at the table with her. Once when they put their paws up on the table, she called them by name and said, “Get your paws off the table.” They immediately did. It was hilarious. — Connie Pahl

Meet our pretty boy, Calcifer; and the majestic Orange. Also, this is our boy Lulu, and our girl Yuki. — Gina

We called him Mr. Farthington because he was so genteel and dignified. — Robin Hansen

Butters, also known as Mr. Butters, who was supposedly named by the Humane Society because of his color. We think he was named for the South Park character. — Kim Peterson Krueger

Stubby was born with only half a tail. — Kimberly Heider

I like to call our orange cat Fuzzer Wuzzer, and our grey cat (RIP) was called Fat Cat due to her chunky stature. — Grace Johnson

Khaos. He was named after the Monster energy drink by the Humane Society. We never felt the need to change it. — Julie Ploor

Here’s my best boy, Hobbs. Yes, Hobbs with no “e.” I’m forever explaining to people that we didn’t name him after Calvin & Hobbes. We named him after David Hobbs, a former British racing driver who owns a Honda dealership in Glendale, Wisconsin. — Melissa Ripp Lozoff

This is Steve. He’s a teacup chihuahua/miniature Jack Russell mix who’s soon to be a 10-year-old. He’s super photogenic and loves to pose. — Eric Leyendecker

Tater. We got her when she was four weeks old, and our daughter said she looked like a fuzzy potato. — Aimee Frerk West

NOT PICTURED: This is our cat, Blackhead. She was named by our then-four-year-old grandson because of her brown ears and nose. We have several other cats, including Mr. Universe (a giant when he was little), Headdy (who liked to sit on my husband’s head when she was little), and our traveling cats, Magellan, Ferdinand and Marco. — Sue Anderson Crass

Our beagle Booker T. He’s the lead in the rock band The Howlers. The two ladies on the side are his backup singers, the Footnotes (Elsa and Addie). — Marlen Krause Zetley

The Screamer. He’s a grumpy old man of a cat and definitely lets you know when it’s time to get out of bed! — Julia Maskell

MadDog the baby goat was born on the first day of 2020. — Jinx Etling

Shy-Annie. She was six months old when I got her and so shy. — Brenda Golembiewski Bayer