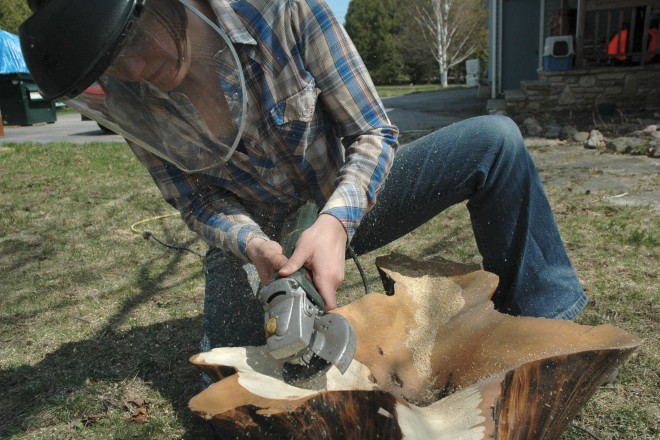 The word “passionate” is perhaps an over-used word for describing artists, particularly in the diverse arts community of Door County. But it is difficult to listen to artist, mother, and environmentalist Angela Lensch talk about her work and the philosophy behind it without the word “passionate” coming to mind. A young furniture-maker, sculptor, and jewelry-maker at the beginning of a promising career, Angela has a clearly articulated vision and a sense of purpose that belies her relatively recent emergence on the Door County arts scene.

We sat down in a café on a sunny soon-to-be-spring day, and Angela explained the driving force behind her art. “Nature is my creative igniter, my motivation, and my greatest teacher,” she says. “I try to get people to see nature as an extension of themselves, and be aware of the interconnectedness between all living things.” With Native American and Asian tribal art among her influences, even the media she chooses to create her work out of reflects her philosophy. Angela takes wood, steel, iron, bronze, gemstones, leather, glass, and fabric and uses them to create objects as diverse as a delicate beaded necklace to a geometric steel-and-glass coffee table.

The sheer breadth of her work is impressive. Her recent exhibit, “Inner Light,” at the Unitarian Universalist Fellowship in Sister Bay, featured what she calls her “Branch Lights.” These are cut cedar branches that have been de-barked to bring out the wood’s natural glow, with lights placed behind it to represent the inner life force within the branches. Her work also extends to functional and beautiful tables and chairs made of forged steel, cast aluminum, and glass. In addition, Angela has spent years developing her “Spirit Ladies,” which are forged-steel and cedar sculptures; “Contemplation Chairs,” which are graceful seats carved from cedar and black walnut; and other sculptures made of red oak, cedar, and cast aluminum.

Angela describes her artistic process as a collaboration with nature, and cites Mother Nature as her greatest influence. The spiritual process is as important to her as the product, and she sees her art as an extension of who and what she is. The materials she begins with also dictate her creative process. “Creating with wood is a very powerful experience, for each piece of wood has a life within itself waiting to come out, and I am the catalyst. Steel wants much more to be controlled and transformed. I love taking this hard, linear material and manipulating it into natural and sensitive curves filled with emotion.”

When I asked Angela how she got her start as an artist, she just laughed. “Art is the only thing I was ever good at.” She went on to describe one of her early forays into sculpture when she built herself a wagon at age eight and took apart her roller skates to complete the project. “I grew up on a farm in Decorah, Iowa, and I think that’s why I always made things with a function, a purpose beyond what it said to me as art.” Throughout her childhood, Angela was constantly observing nature and building things with her own hands, blurring the line between function and art.

She began her formal study at the Kansas City Institute of Art, where she studied pottery and fiber arts. Wishing to expand her work to encompass all forms of three-dimensional art, she transferred to the Minneapolis College of Art and Design (MCAD) and earned a double major in sculpture and furniture. As a student there, Angela explored working with metal, glass, and wood, and developed her methods of transforming everyday materials into graceful and fluid pieces of art. “My teachers always described me as ‘dancing with my work,’” Angela says with a smile. Taking one look at her extensive portfolio, it is easy to see why. The way her pieces seem to flow embodies a dance-like quality, as if she has infused life and spirit into these inanimate materials.

Angela was introduced to Door County through her childhood friend and now significant other, Sern Olson. She felt immediately welcomed by the arts community here, and began showing work at the Franklin Woods Gallery in the summer of 2001. Angela made Door County her home in 2002, and went on to participate in the Emerging Artists Program at Peninsula Art School in 2003. Now there is no other place she could see herself. “The feeling I get from Door County inspires me to create more and more, because of the beauty of Mother Nature found here and the influence of all the wise women I have met here. I love the seasons, and the way Door County life follows those seasons, hibernating in the winter and coming out in spring.”

A big part of the artists’ community she has found in Door County is the Women’s Art Salon, an art marketing group aimed at giving female emerging artists a chance to learn more about art as a business and share ideas for how to succeed in the competitive market of fine art. The Salon serves as a support system as well as a breeding ground for new material. This September, the group, which includes potters, fiber artists, painters, a photographer, a papermaker, and a vocalist, will create a joint exhibition entitled “Art in the Barn.” The exhibit will be on display at the Off the Wheel Pottery Gallery, and will feature a collaborative piece involving the art of each of the Women’s Art Salon members.

Collaborative projects like this are a major focus for Angela, who sees her work as taking place within a larger world of art and nature. Co-curator for the “Common Ground” exhibit that opened at the Hardy Center for the Arts in 2004, Angela, along with others, was responsible for pulling together visual artists as well as environmental educators to create a work that spoke to preserving our forests and green spaces. This exhibit has since traveled to Marinette/Menominee in the summer of 2005, and will appear in Hilbert, Wisconsin later this year. She is also involved in the Door County Land Trust and Door County Green Fund.

Since earning her degree from MCAD in 2001, Angela’s work has been exhibited in more than 25 shows throughout the Midwest, and eight galleries in Door County currently carry her work. Her future goals include creating a workshop series for children to incorporate learning about nature through art, and expanding her work to include further study in cast iron as well as forest trees. But Angela never loses sight of what she describes as her most important job – being a great mom to her two year-old son Leif and a partner to her significant other and collaborator Sern. “I hope my art will give people a sense of calm and peace,” she says as we emerge from the café into the sunshine. “But what I love about art is that you never know what someone is going to get out of it. Everyone has their own inner light, and I hope that through my art, I can reflect that light.”