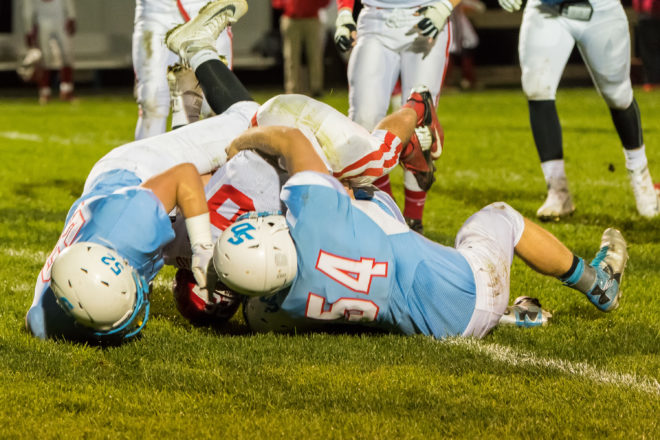 Dwindling enrollment numbers have some officials more concerned about the future of football in high school than concussion fears. Photo by Len Villano.

While many worry that head injuries will mean the end of full contact high school football, researcher Tim McGuine said the concerns may be misplaced.

“The people having the large adverse effects from head injuries, those are the worst-case instances,” he said, referring to the high-profile stories of NFL players who have killed themselves and been found to have Chronic Traumatic Encephalopathy, a degenerative brain disease.

“Those are athletes competing with the biggest, strongest and fastest athletes in the world, and doing it for years and years,” he said. “Compare that to the athlete getting one concussion in high school. You have a kid who is playing a nine-week season, for four years. So you have to ask how these NFL impacts relate to the kid in high school?”

WIAA Deputy Director Wade Labecki said there’s a bigger threat to the future of the game.

“We have less kids available,” he said. “Overall enrollment in Wisconsin is down 40,000 students in the last 10 years.”

“I think you’re seeing around the conference, numbers are an issue,” said Sturgeon Bay football coach Mike LeRoy. “Concussions might be a factor for some kids, but I think there are other factors as well.There are kids that just aren’t playing sports. Kids don’t roughhouse as much as they used to, they spend less time outside.”

Aside from numbers, LeRoy said he’s not concerned about the long-term prospects for full-contact high school football. “I don’t think it’s going anywhere.”

But changes will come to the lower levels.

“The youth contact probably is something that is going to come under fire,” he said. “Maybe kids shouldn’t be tackling each other until they’re more mature. At the youth level you’ll have one really big kid and the body sizes are so much different.”