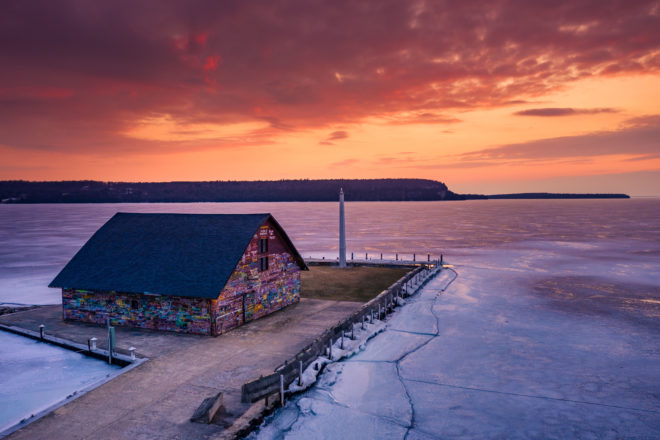 The Hardy Gallery has provided a centerpiece for countless photographs. File photo by Brett Kosmider.

The future of one of Door County’s most recognizable buildings is up for discussion in Ephraim.

During its meeting Tuesday, the Ephraim Village Board decided to take a step back to gather more input on the future of Anderson Dock and the Hardy Gallery after residents raised questions about the information upon which the village was basing its deliberations.

The warehouse on Anderson Dock has been home to the Hardy Gallery since 1961. When high water threatened the building in 2019, village board members and residents made it a high priority to preserve and protect the famously graffiti-covered warehouse that has been the backdrop for countless photos for weddings, family reunions and sunsets.

But the scope of the discussion has expanded. Tuesday’s village agenda included a recommendation from the Capital Projects Committee to consider alternative uses for the building.

“Would the village consider alternative uses for the building?” committee chair Ken Nelson asked. “Or should it be repaired, or reproduced with modern materials?”

Nelson said information he has received from the village and elsewhere is that the warehouse is not part of the designated historical site, but several people in attendance disputed that claim. The Anderson Dock Historic District has been listed with the National Register of Historic Places since 1984.

Village president Mike McCutcheon suggested the village put the idea of alternative uses on the back burner until it can determine exactly what the status of the site and building is.

“It would have been good practice to consult with the tenant who has a lease,” Sauter said.

Throughout the evening, several board members noted that its meetings are open to the public, and residents should get informed by checking agendas and coming to meetings.

Village administrator Brent Bristol said the discussions have not been specific to the future of the Hardy Gallery.

“Nobody ever said we should kick the Hardy Gallery out,” he said. “What we’re asking is, is there a future need above what the present facility needs infrastructure-wise? Are we designing it for all it will ever be? It has modest bathrooms. As long as we’re putting money into the building, should we do more? Hopefully, if we’re going to put money into it, it’s going to be a 30- to 50-year investment.”

Adolf Anderson sold the dock and warehouse, which dates to 1893, to the village in 1949, and the village in turn leased it to the Ephraim Historical Foundation (EHF). The EHF subleased the warehouse to the Hardy Gallery from 1961 until 2000, and since 2001, the village has leased it directly to the gallery, which welcomed 18,859 visitors in 2021.

The Hardy Gallery’s lease expires in May of 2023, and the village must notify the gallery six months prior if it does not intend to renew the lease. That gives the village six months to figure out its options, trustee Cindy Nelson said.

A motion to discontinue discussion of alternative uses failed, but primarily because board members said they needed details on the historical status of the structures before making a decision.

“I want to find out what it is classified as before I make any decision,” said trustee Matt Meacham.