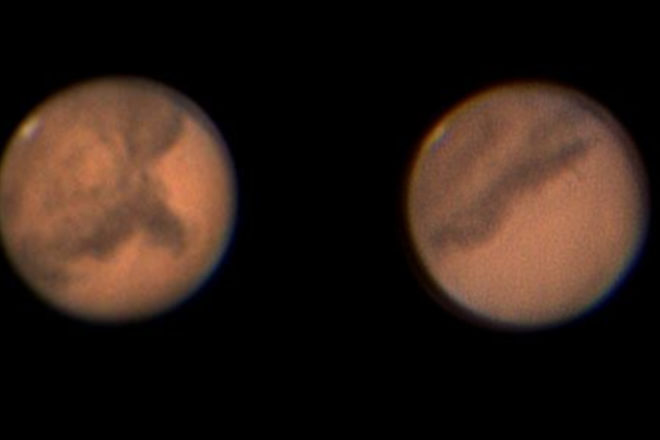 This photo was taken as a 60-second video consisting of about 2,000 images. Software then sorts the best 1,000 frames and “stacks” them to create a clearer image. The photo shows two sides of Mars, taken a few weeks apart, using the DPAS’s seven-inch scope, which is ideal for planetary and lunar imaging. At the top left side of the planet is the small polar cap made of frozen carbon dioxide ice that gets larger and smaller with the Martian seasons. Dark features on the surface are visible, but no canals! Photos by Tom Gwilym.

Mars. Just the name of the fourth planet from the sun reminds us of Martians, War of the Worlds, The Martian Chronicles and many other wonderful and imaginative stories from science-fiction writers and filmmakers.

In reality, Mars is just a very cold, dusty, mostly dry, desert planet that at one time in the distant past may have had lakes and rivers, as seen by spacecraft images. As seen locally: enjoy one of our beautiful Door County sunsets, turn around, look over your left shoulder and notice the brightest red object high in the sky.

Serious exploration of Mars began with Earth-bound telescopes during the late 19th century. Italian astronomer Giovanni Schiaparelli observed Mars in 1877 and documented features he called “canali” (canals) on the surface. Many other early astronomers documented similar features over the years, and Percival Lowell – who’s famous for discovering Pluto – even mapped these canal features.

Of course we have to remember that these early astronomers were depending on visual documentation and drawing what they saw – without the aid of the cameras that we use now, and with telescopes that were of fairly poor quality. Or maybe these guys had severe floaters in their eyes?

Since 1960, humans have been trying to send spacecraft to Mars, and the first success story was the 1964 Mariner 4 flyby, which sent back the first images – with no canals evident. The unmanned Viking 1 made the first Mars landing, arriving safely on the surface July 20, 1976 – the seventh anniversary of the first Apollo lunar landing!

There have been 49 spacecraft launched to Mars since 1960, but the planet likes to “eat” them: A majority of the efforts have failed because of crashes, rocket failures and even a very embarrassing math error that caused a spacecraft to burn up in the atmosphere.

Eight spacecraft, including one rover and a lander, are currently operational in orbit and on the surface. The most famous rover was the Opportunity Rover, which was planned to last 90 sols (Mars days), but it survived for 14 years and drove 28 miles.

Recently, the next rover to land, Perseverance, is just past its halfway point to Mars and will land Feb. 18, 2021. This rover will even have a small drone, microphone and canisters for returning samples.

With all these spacecraft, observations and exploration, we’ve observed seasons, wind, planetwide dust storms, the largest known volcano in the solar system (Olympus Mons), a huge canyon (Valles Marinaris) that makes the Grand Canyon look like a ditch, detection of Mars quakes, polar caps, clouds, miles-high dust devils and evidence of water (and surface water in the past), to name a few things.

Mars has always been a goal for human exploration, and it may be a possibility in the not-too-distant future.

Tom Gwilym, vice president of the Door Peninsula Astronomical Society (DPAS) in Sturgeon Bay, is a local astronomer who operates the DPAS’s Leif Everson Observatory and its planetarium show. Witness the fruits of his galaxy gazing at nightskiesnetwork.com, and connect with the DPAS on its Facebook page to read about space-exploration current events and see the latest images from its telescope.