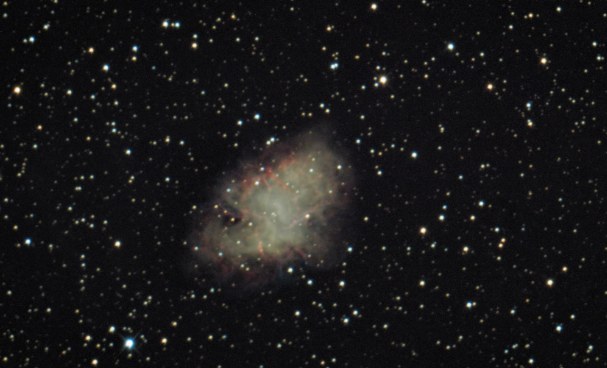 The Crab Nebula, photographed with the Door Peninsula Astronomical Society’s 16-inch telescope at the Leif Everson Observatory in Sturgeon Bay in mid-November. It’s a combination of 25 exposures between two and five minutes combined, or stacked, with software. Photo by Tom Gwilym.

The dramatic end of larger stars

The biggest explosions that humans have ever seen (from a safe distance) are supernovae: the explosive, end-of-life events of larger stars. The star has to be about five times larger than our own sun to go out with this kind of a bang.

Basically, a star burns nuclear fuel at its core for billions of years, generating huge amounts of energy. This energy from the core produces huge pressure, which keeps the center core burning, keeps the star “inflated” and maintains its shape. On the other side, the mass of the star is always trying to collapse it because of gravity pulling it inward. It’s a perfect balance between the core pressure and gravity, which keeps the star going throughout its lifetime.

When the star runs out of fuel, however, the core starts to cool, pressure drops, gravity starts to win the battle, and the star will collapse on itself. This can happen very quickly, and as it collapses on itself, the shock waves cause the outer parts to explode. The collapsed star will possibly form a black hole or a very dense cooling core called a neutron star.

A supernova can easily outshine an entire galaxy, and for a few weeks, it’s a rare time when we can actually view an individual star in a distant galaxy. Quite often a supernova is fairly easy to view (and photograph) with a modest amateur telescope.

The Crab Nebula (M1) is the remnants of a supernova observed and documented by a Chinese astronomer in the year 1054, when it appeared as a “guest star” in the sky. It was documented to be bright enough to be viewed even in the daytime. It was visible to the naked eye for almost two years before it faded out.

The Crab Nebula gets its name from William Parsons, who observed it in 1840 with a 36-inch telescope. He said it looked like a crab, but many of us are still trying to see the crab shape he saw!

During the 1960s, a pulsing signal was discovered radiating from the center of the nebula at 30 times per second. It turns out that there is a pular (rapidly spinning neutron star) at the center with a hot spot that radiates radio/X-rays as it spins – similar to the light on a lighthouse rotating, but just a bit faster!

Today we observe the Crab Nebula nearly 1,000 years after it exploded, and we see the expanding debris cloud from the explosion. The nebula is about 6,500 light years from Earth, so when it was visible in 1054, it had already exploded 6,500 years prior to being seen.

The Crab Nebula is a good fall/winter object on which to focus a telescope. It’s nicely located high in the sky for most of the winter in the constellation of Taurus the Bull. Even with a very modest telescope, it’s an easy object to view.

Tom Gwilym of Sturgeon Bay is an astronomer who operates the Door Peninsula Astronomical Society’s Leif Everson Observatory and its planetarium show. Witness the fruits of his galaxy gazing at nightskiesnetwork.com, and connect with the society on its Facebook page to read about space-exploration current events and see the latest images from its telescope.