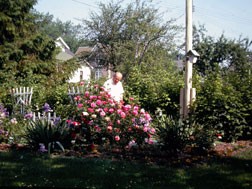 One look at our pink Hollyhocks in full bloom in our front yard now brings back sweet memories of my parents and their fondness for garden flowers. Both spent a great deal of time with the flowers at home, knew them well and how to get the best out of them. They had some of the most interesting flower gardens I’ve ever seen.

Some of their favorite friends were people who also enjoyed gardening, and they were frequently trading cuttings or young flower plants they admired in each other’s gardens.

We were fortunate to have been raised during that time in history during the 1930s and 1940s when nearby relatives would often drop in unexpectedly on a Sunday afternoon in summer, and before you knew it, everyone was out in the flower gardens. Those surely must have been some of my parents’ happiest moments.

Dad barbered six days a week from 8 am until 5:30 or 6 pm. He would often be up at 5 am tending to his flowers and vegetables while everyone else in the family was still sleeping. He worked in his garden the day before he died, at about 90, and now I am the proud owner of his long-handled, four-tined cultivating fork, which I also use a lot.

Dad’s specialties centered around his large, tiered bed of about 50 Tuberous Begonias on the north side of our home, his long two-foot-wide planting of Pink Magic Petunias, edged with White Alyssums, bordering the entire length of our 60-foot-long driveway, and several dozen rose bushes scattered throughout the property. At the end of the Petunia bed, closest to the garage, grew his prized Spartan Tree Rose, which in some years had more than 75 blossoms at one time.

To see that many blossoms together at eye level was quite wonderful. The challenge of that Tree Rose was that it had to be uprooted, laid on its side and then carefully covered with loose soil and insulated with a few tarps before winter set in. It looked for all the world like a freshly made grave, and Dad called it his rose bush grave in winter.

Growing out in the sun next to our huge sand pile along the north side of our garage was a Mock Orange Shrub. My brothers and I spent many hours playing in that sand pile, complete with a good supply of water from the nearby outside water tap, and I can still recall not only the shower of white blossoms on the Mock Orange but also its heady fragrance.

Beyond the sand pile to the north grew upwards of 200-300 Gladiola, or “Glads” as my parents called them. Some of my first colored slides, which I cherish today, were taken of the Glads about 63 years ago. 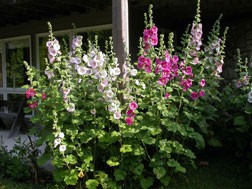 There came a time when my Dad spent several weeks in a Green Bay hospital recuperating from a serious spinal “fusion” operation. It was fortunate that period coincided with the blooming of the Glads, because we were able to bring to him a huge fresh bouquet of them every day while they were in bloom. How the nurses would vie for the day-old bouquet, still very fresh looking, that was being replaced daily by the new one in Dad’s room.

There weren’t many homes in my predominantly Bohemian hometown of Kewaunee that didn’t have Hollyhocks decorating the landscape, and our property was no exception. Perhaps we admire them so much today not only for their tall stature, colors and blossom shape that attracts hummingbirds and bumblebees, but also for their ease of growing. Not much care is needed for these hardy plants, great favorites of many.

Since my dad did much of the physical work in the garden, he grew many perennials. A great favorite of his were the Bearded Irises, which he handled very well, knew when and how to divide them, and loved to show off his favorites. One variety I clearly recall was the splendid light blue “Great Lakes.”

Bleeding Hearts, Delphiniums, Daisies, Strawflowers and Asters were all nicely placed along the garden edges where they would help set off the taller plants behind them and also receive the proper growing conditions.

I’ll always remember their beautiful bed of white Double Arabis that grew around the two Lilac shrubs near our “playground.”

A white wooden trellis that my dad built stood at the west end of our horseshoe-pitching area north of the house, and the trellis was literally covered with American Bittersweet, a handsome native vine. Each fall my Mom would make beautiful centerpieces composed of the Bittersweet, Chinese Lanterns (a species of Physalis in the Nightshade family) and Honesty or “Silver Dollars,” Lunaria annua.

Like so many other Bohemian families in our town, we too had a large patch of Poppies grown for the Poppy seed that my mother, who made delicious pastry, used especially in the baking of her ambrosial kolacs. The word “kolac” is pronounced KOE-lotch in Czech. This raised baking, filled with a variety of ingredients such as stewed prunes, cottage cheese, apricots or even raspberries, was most relished when the filling consisted of sweetened ground poppy seed.

What a beautiful sight that Poppy patch was with many four-to-five foot-tall plants having pastel lavender blossoms. It was our responsibility as boys to stand guard just before the seedpods ripened to scare the Goldfinches away from the patch. They were virtually addicted to the seeds.

I can easily picture my Dad smacking his lips over a poppy seed kolac. How he treasured his Poppy patch, and he wasn’t about to allow the Goldfinches to interfere with that delicacy. 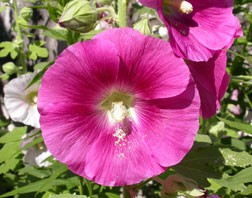 It was when Charlotte and I were living in the Rangelight Residence at the Ridges Sanctuary during the 1970s and early ’80s that we got several Hollyhock plants from my dad’s garden in Kewaunee and transplanted them in our tiny flower garden at Baileys Harbor. From there they were brought to our new home west of Jacksonport in 1982 where they are doing very well next to the east retaining wall near the house. It is usually the white and pink varieties that seem to survive the longest, and they agree with us just fine.

What cherished memories the summer garden flowers bring back!