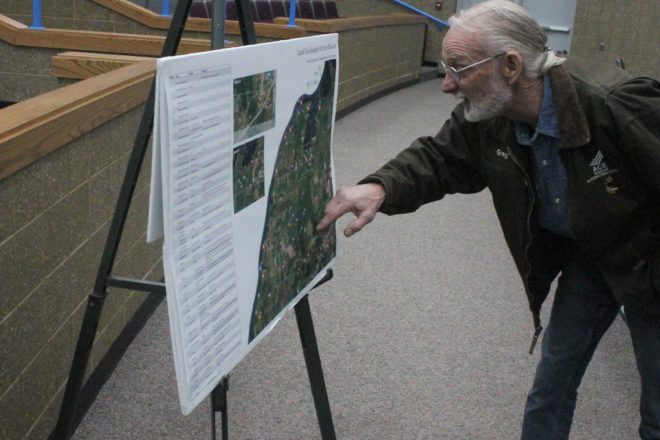 Gardner resident Greg Pierre took a close look at a land-use map during an April 27 open house in the Southern Door Community Auditorium on the town’s proposed 2022-42 comprehensive plan. Photo by Kevin Boneske.

The Gardner Plan Commission held a public hearing April 27 in the Southern Door Community Auditorium to consider the final draft of a 20-year comprehensive plan that will assist Gardner officials in honoring the town’s vision on matters such as land use.

An open house on the plan, which was created with assistance from the Bay-Lake Regional Planning Commission, took place prior to the hearing that evening, when about 20 citizens were in attendance.

Plan Commission chair Mark Lentz said the town contacted Gardner residents late last year to complete a survey about what to include in the plan.

Lentz said the new plan, which will be up for final adoption May 11 by the town board, will provide a “guidebook on how the town should grow,” but “it presents ideas in concept,” he said. “It’s not a hard-fast law. It’s not an ordinance.”

Except for shoreline zoning administered by Door County, Lentz said  Gardner does not have zoning to regulate land use.

“You may recall last year, after the April election, we had an advisory referendum asking people if they thought Gardner should have some zoning,” he said. “The consensus was [that] we should look into some sort of zoning.”

Following adoption of the comprehensive plan, Lentz said the town board will be looking at options to implement the zoning that voters said they wanted the town to consider.

“That might take us through the majority of summer to get through that,” he said.

Lentz said the town has three options for zoning: create its own ordinances and enforce them; adopt Door County zoning, administered by the County of Door; or do nothing.

Whatever zoning option the board pursues, he said that process should be wrapped up by the end of the summer.

Zoning awareness has surfaced in Gardner during the past two years after a new limestone quarry was allowed off Stevenson Pier Road. Although neighboring residents objected to the land use, they learned that without zoning, they couldn’t prevent the quarry from opening.

“That was a good eye-opener to town officials and those on the Plan Commission,” Lentz said. “We need a little tighter regulation. We recognize that people buy property, especially in the rural environment, who don’t like to be told what they can do with it.”

The town adopted a nonmetallic-mining ordinance last year, but the new quarry was grandfathered in and allowed to operate.

Lentz said the town is hoping to wrap up the process for putting together a new comprehensive plan by June 30.

He said the town applied a year ago for a Wisconsin Coastal Management grant to help pay for the plan, and the grant Gardner received will cover half the cost.

Adam Christensen, a Bay-Lake Regional Planning Commission environmental planner who was on hand for the public hearing and open house, said an important part of the comprehensive plan involves setting goals for the next 20 years.

“For the natural-resources section, the overall guiding goal is to preserve the natural resources, preserve agriculture; and then within the housing [section], it kind of calls for planning in a matter that is orderly and makes sense and isn’t just kind of spread about,” Christensen said.

He said the new plan doesn’t directly address mining in the town.

“Right now the town has a mining ordinance, and that’s kind of where they’re at,” he said.