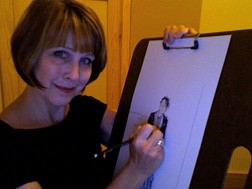 The ten women chosen include members of the Sjoquist (Seaquist), Roeser and Bunda families as well as other fascinating individuals from 1868 to 1913. All ages are represented as well, from Theolena Bolette Anderson at four years old to Leone Roeser at 53 years old.

Kopischke collaborated with local writer Patty Podgers to help give each of these women a voice. Bunda’s narrative reads, “Never did hear what exactly set it off. But the winds that night were fierce, and we couldn’t keep up with the flames…We all tried so hard to fight the fire, but it was bigger than any of us.”

The exhibit highlights these extraordinary women who helped settle the peninsula, detailing the challenges they faced and the unique differences in their lives compared to contemporary women.

The renderings were previously on display at Corners of the Past Museum as part of the Sister Bay Centennial Celebration.