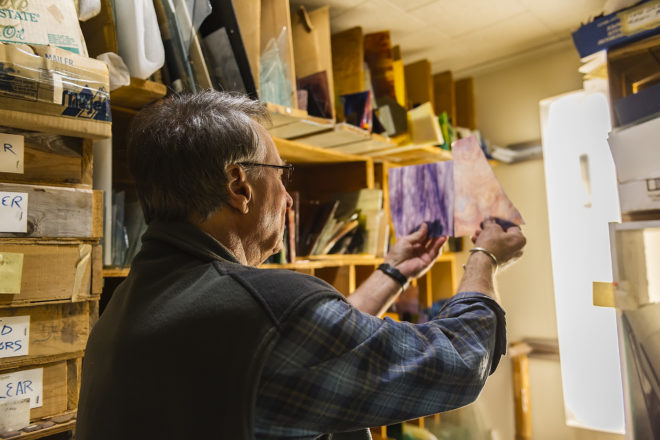 Gary Chaudoir chooses glass in the glass room as he creates a stained-glass window of St. Luke for St. Luke’s Episcopal Church in Sister Bay. Photos by Len Villano.

You’ll never look at a piece of stained glass the same way again after spending time in Gary Chaudoir’s studio.

You can still enjoy the design, the brilliant colors and the way sunlight shining through it casts rainbows around the room, but you’ll also appreciate the fact that its creation was a multi-step process that may have taken the artist months to complete.

Chaudoir was one of nine children who grew up on his family’s 180-acre farm in Namur. Perhaps an early clue to his eventual career was that when he was 12, his father showed him how to use a glass cutter as they replaced windows in farm buildings.

“I liked the way the glass felt as I scored it,” he said, “and how it would snap along the scored line with just a little downward pressure.”

After graduating from Southern Door High School, Chaudoir attended UW-Green Bay, then moved on to UW-Madison to major in mechanical engineering. Classes in statics and dynamics and mechanical fluids caused him to rethink his career goal, and he graduated in 1970 with a business degree.

Because he was in the draft lottery, subject to being called into service whenever his number came up, it was difficult to interview for jobs, so he moved to Aspen, Colorado, to pursue his love of skiing. Chaudoir’s time in the lottery expired with no call to Vietnam, but he stayed in Aspen for six years.

“I was attracted to the lovely homes with Victorian stained glass and public spaces with beautiful Tiffany-style windows,” he said. “I had a Swiss friend, Michael Ohmnact, who had a glass studio and let me come in and watch him work. I was fascinated and – remembering that glass cutter I used as a little boy – thought, ‘I could do that.’”

Back in Door County in the fall of 1976, Chaudoir took three private lessons from Bob Kerschling in his Green Bay home workshop. Kerschling guided Chaudoir through the creation of his first project: an oval piece that included a mirror and a flower.

In 1978, he opened the Eight of Pentacles Glass Studio in a little Sister Bay mall. It began as a stained-glass and woodworking shop, but Chaudoir’s brother, Ted, joined him the next year and took over the woodworking. Other artists in the community began taking in their work, too – paintings, pottery and jewelry – so Chaudoir was free to concentrate on glass creations.

“I did a lot of spec items in those days,” he said, “especially in the winters, which weren’t so tourist-filled then. I might create a dozen skiers or Packer helmets at a time, or exact-scale replicas of all the Door County lighthouses.”

As people saw and appreciated his stained-glass pieces, commissioned work began taking more and more of Chaudoir’s time, but he kept the shop open for 28 years. Since 2006, he’s been working in the studio at his country home on Old Stage Lane.

One of his first major pieces, created in 1980, was “The Vision of Ezekiel,” based on a 14th-century woodcut. The Chaudoir family gave it to St. Mary of the Snows Catholic Church – now the Belgian Heritage Center in Namur – in memory of their father.

Another major commission was a five-foot round piece titled “Our Lamb Has Conquered,” ordered by a parishioner as a memorial for his late wife and presented to the Sister Bay Moravian Church in 1998. A smaller version was done later as a gift for Pastor Kerry Krauss on the 25th anniversary of his ordination, and another full-size piece, with words in the Mesquite language, was sent to Honduras.

Chaudoir has done thousands of pieces during the last 43 years, including many other large projects of which he’s especially proud. The chapel windows at Scandia Village Retirement Center depict the four seasons in Door County. The largest single piece to date is a two-foot-by-13-and-a-half-foot piece called “Lake Michigan – A Love Story” that took five months to create.

Commissioned by a Jacksonport man for his wife, it depicts a panoramic view from the Cana Island Lighthouse to Cave Point. In the center are a man and woman in lawn chairs, gazing at Lake Michigan from the spot where the man proposed. If you look carefully, you can see that Chaudoir – always with an eye for extra detail – has changed the progression of light across the span of the piece from sunrise at Cave Point to a night sky over the lighthouse.

Before “Lake Michigan – A Love Story” was installed in the owner’s home, he allowed it to be displayed at the Sister Bay Village Hall during a 2018 event that marked Chaudoir’s 40th anniversary as a creator of glass art. About 40 percent of the attendees were former or current students: some of the 700 to 800 he estimates he’s taught since 1982 at The Clearing, at NWTC and privately.

Since closing the shop in 2006, Chaudoir has held open-studio sessions on Thursdays for no more than six people at a time. Some of his students have been coming for years and now have their own shops or sell their work on Etsy.

“They enjoy being able to have questions answered immediately,” Chaudoir said, “and having access to all the materials they need,” most of which come from Naperville, Illinois, but paint comes from a company founded in Germany in 1906. (A jar of “paint” is not what one would expect. It contains tiny particles of pulverized glass that the artist mixes with gum arabic and water to the desired consistency.)

The three-foot, three-dimensional egg that Chaudoir created for Egg Harbor’s EGGstravaganza in 2014 featured hundreds of tiny pieces of glass that he glued on individually. It sold at auction for $6,300.

“I was pretty tickled,” he recalled.

“A fellow came into the shop, looking like everyone else,” Chaudoir said. “It turned out he had a request unlike anyone else’s: windows for the dining room in his 71-foot yacht!”

The piece Chaudoir worked on in early 2019 is a three-foot-by-four-foot adaptation of a painting of St. Luke for St. Luke’s Episcopal Church in Sister Bay. The stained-glass work took about four months to complete and was dedicated at the church on June 9, 2019.

Eight steps go into a stained-glass creation. First, a full-scale drawing, called a cartoon, is done on negative paper, then transferred to hard “pattern paper.” Each piece of the drawing is numbered, then cut from the pattern paper with special shears that leave a 1/32-inch edge around each piece. The glass is cut according to the pattern. (It’s not as simple as picking up a sheet of blue glass and cutting the pieces for St. Luke’s robe. Chaudoir went through many, many samples to find just the shade of blue that he wanted.)

Next the cut pieces – about 275 of them for this project – have to be ground for the final fit. The edges of each piece are wrapped with copper-foil tape, with exactly 1/32 of an inch of the tape on top of and beneath each edge. (This is meticulous, time-consuming work, but Chaudoir said it becomes a kind of meditation.) Soldering bonds the tape to hold the pieces together, and, finally, the completed project is cleaned and polished.

St. Luke’s garments have several unusual features. Wanting to depict realistic folds in the material, Chaudoir used for the sleeves of the undergarment white “drapery glass” that was left over from an earlier piece called “Blind Justice.” Because drapery glass wasn’t available in the shade of blue that he wanted for the robe, he learned to create it himself, laying flat, blue glass over pieces of special material that wouldn’t disintegrate in the kiln as the folds were forming.

Another distinctive feature of this piece are the 10 small, metallic-looking squares incorporated in the lower corners of the picture. They are dichroic glass, developed by NASA by vaporizing metal oxides in a vacuum under high heat to settle on glass surfaces and create different light spectra.

Norma Bramsen, chair of the committee that commissioned the piece, said, “People are really excited about the stained-glass window. One thing about having a building that was originally built for another purpose is that it has stimulated the creative juices of parishioners over the years to think of ways to enhance how the building now serves as a community worship space. We hope that people will come to see this beautiful addition for themselves.”

In preparation for hand-painting St. Luke’s face and hands, Chaudoir – who’s been painting faces on glass for decades – went back to Bob Kerschling for a brush-up class.

“I love the opportunity to learn new facets of working with glass,” he said. “Every year I pick up something new.”

The Eight of Pentacles – the name Chaudoir chose for his shop 41 years ago – was prophetic. The message of this particular card in a tarot deck is, “There is hard work ahead of you on your way to your dream, especially if you are using skills you are still trying to master.”