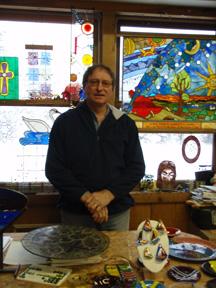 Glass artist Gary Chaudoir sits on one side of his wooden worktable, offering a cup of coffee with a dash of cocoa, while his collie wanders shyly at his feet. There are colorful glass dishes on another table, glass sun catchers and ornaments hanging in the windows, and glass pendants and rings on gray display mats.

Though requiring an array of tools and processes, including sandblasting, fusing, and slumping, Chaudoir explains that creating glass art is very similar to any artistic process. A piece begins “as a drawing, free-hand, put on hard paper, like postcard stock. Each piece is numbered, cut out with special shears, placed on glass of appropriate color.”

“I like [glass art] because there’s a lot of physicality to it, a lot of chemistry and physics in fusing,” he continues. “[There are an] extremely wide variety of colors and textures, almost the same mix of colors that painters have.”

Hailing from Southern Door, Chaudoir grew up on his family’s farm. “I learned the rudimentary basics when I was 11 or 12,” he says. “When I was that age my dad taught me to cut glass for repairing windows on the farm. I became the go-to guy for glass repair.”

In 1976, six years after graduating from UW-Madison with a degree in business, Chaudoir decided to pursue glass art further while living in Green Bay. “The technical college offered classes, but they were done for the season. The instructor said I could put up flyers advertising [an additional] class. ‘You fill it up, I’ll teach it,’ he said. It filled up…[and] that’s how I got started.”

“Blind Justice,” by Gary Chaudoir, on display at the Door County Justice Center.

Long-time Door County tourists and residents would be familiar with Chaudoir and his work from his former shop, The Eight of Pentacles, which was located in the Walkway Shops of Sister Bay for 28 years before it was torn down in 2006.

“Some people said they never came to Door County without stopping there – we had so many different kinds of artwork,” he said. However, because he was constantly working at the shop, he says, “it deprived me of working in glass during the summer months.”

After the building was torn down, Chaudoir decided to “make a go of teaching, stained glass repairs, mosaics, children’s workshops, making awards and trophies.” He also explored other facets of glass art.

“Thanks to commissions from various customers,” he says, “it pushed me into different areas of glasswork – mosaics, sandblasting, glass painting. I’ve been lucky enough to get custom orders. At present, I have six commissions.”

One point of pride for Chaudoir is a piece the US Navy commissioned him to do in 2008 of a Littoral Combat Ship, a present for the ship’s sponsor.

Since the mid-‘80s, Chaudoir has taught at The Clearing Folk School. In the winter months, January and February, “seventy-five percent of my time goes to teaching,” he says, adding that he enjoys the “ebb and flow of the week-to-week, watching the students catch on and create their own design. There is an extreme variety of designs and projects they come up with, it’s satisfying. Some students like it so much they set up times throughout the year to learn.” 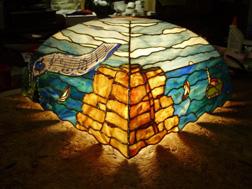 During the summer months Chaudoir conducts a weekly stained glass class and a weekly fused glass class. He also leads workshops for Road Scholars and workshops at the EAA Air Venture craft tent held in Oshkosh. For the children’s workshops, he says, “I put all my chips in a tumbler and tumble them, then they’re really smooth and safe for children.”

“I can use the tiniest scraps,” he says. “I have saved scraps for 30 years – boxes and boxes of chips.” He stresses his practice of recycling and reusing, setting a wine bottle on the table that has been formed into a serving bowl. “I put them in the kiln at 1,400 degrees,” he says. “They take a new shape, get a new life.”

One of his current projects is a series of water views from each Door County village. “I look at the vistas in nature, and try to interpret that with glass,” he says. 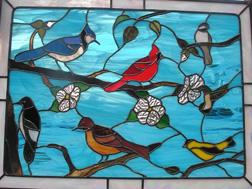 For Door County residents and tourists, there are many opportunities to see Chaudoir and his work throughout the county. He is present at many Door County art fairs, including Fyr Bal in Ephraim and the Sister Bay Festival of the Arts. His work is featured at the Blue Ox, Scandia Village, Sister Bay Moravian Church, and many other locations.

But Chaudoir’s interest also lies outside the county. He and his wife, Patty, have traveled all over the world. “We made a habit of traveling during the fall of each year. November we would go abroad for three to five weeks.” On separate occasions, the couple visited England, Ireland, China, Turkey, Israel, Egypt, Western Europe, New Zealand, and Peru.

“I enjoyed them… reinvigorating the pilot light for next year,” he smiles. He has brought this love of traveling to Door County by participating in the Kiwanis International Club for many years, acting as past president and now as the travelogue chairman.

Chaudoir reflects for a moment on his ideal goal for the future: “Get involved overseas somewhere in a glass project.”

No matter his course, Chaudoir’s influence on Door County’s glass art scene will be seen for a long time to come.

Chaudoir Glass Studio is located at 10130 Old Stage Lane in Sister Bay. The studio is open by appointment throughout the year, and on Tuesdays and Thursdays from 12 – 5 pm from May to October. For more information call 920.854.4825 or email [email protected].