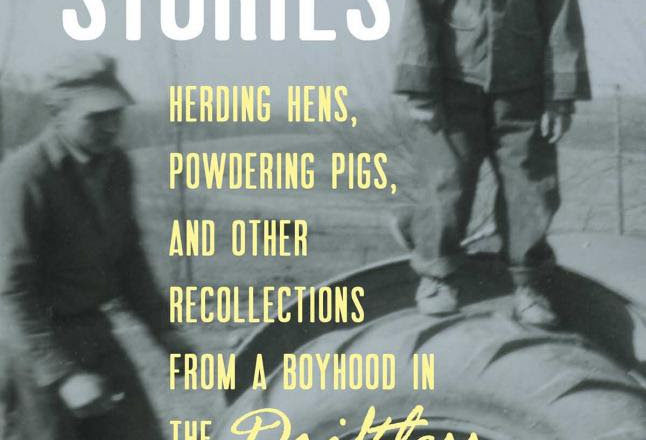 If writing a memoir is akin to capturing life’s fleeting moments on the page, then Gary Jones’ new book, Ridge Stories: Herding Hens, Powdering Pigs, and Other Recollections from a Boyhood in the Driftless, is time stoppered in a glass vacuum milk bottle. The memoir, a series of reflections, relies on the historically specific experience of boyhood in the agrarian Wisconsin of the mid-20th century. It gives a refreshingly honest — and far from romantic — perspective on everything from the joy of collecting eggs to the humor of a cussing grandmother.

“I had begun the book initially as a series of short pieces in the ’70s,” Jones explained. “I sent those to the Green Sheet of the Milwaukee Journal and Good Morning! page of the Milwaukee Sentinel, back when they were separate papers.”

Jones and his wife, Lu, have swapped stories of their rural childhood for decades. Lu encouraged him to gather his boyhood stories — which, by now, she knows as well as he does — into a single volume.

“Where I was raised, I was in an area that was about 20 years behind the rest of rural Wisconsin,” Jones said. “Lu is my age, and she was raised on a farm near Platteville, which was only about 70 miles away from me, but her father never used threshers — they combined. Well, we used threshers and were still shocking oats. I went to a one-room school all eight years. So I sounded like it was Little House on the Prairie stuff, but it was real. That’s when I realized that my childhood was unique, and there may be people interested in those things.”

After retiring from teaching — first from Gibraltar and later from UW-Platteville — Jones found himself attempting to define the next chapter of his life. He found that the act of compiling these stories from as far back as the ’70s was a worthy endeavor.

“Writing is very important to me,” Jones said. “I tell people that I would be even crazier than I am already if I didn’t write as much as I do because I write virtually every day. And I run. Writing and running are very compatible. I do a lot of my writing on the hoof.”

That marriage of writing and being out on the roads has created an altogether holistic notion of realism paired with lyrically natural prose. The ridge and farm themselves are so vibrantly depicted that they take on an almost ethereal role, as colorful as the characters who tread there.

“What I found myself doing is [creating] a sort of mythology of the ridge,” Jones said. “Not mythology in the sense that is false and fictional, but mythology in the sense that commonplace events and people take on a larger presence. When you look at the names of some of these people like Chauncey Quackenbush, they were real people that lived there, and their lives were as unusual as they were. There’s sort of a primitive aspect to the way that we were living, and a naivete, a provincialism, and with that, some of the less exemplary things.”

Those “less exemplary things” are what make the book so refreshing, albeit equally bleak. Characters such as Barney, a neighbor who ventures out to get the cows and then hangs himself. Mental illness and racism exist alongside the rural simplicity of drying clothes around the stove of the one-room schoolhouse and conversations with Dad in the milking barn. In Ridge Stories, Jones’ childhood and those of generations of Americans spill off the page with rich, sensory imagery, depicting both the nostalgic and the macabre.

“In one general abstract respect, our nation was primarily a rural economy,” Jones said. “That’s the roots of our nation. It’s going away, and it’s no one’s fault, and things will probably be OK. But it’s incredibly painful.”

As Wisconsin’s 80-acre farms are absorbed by the 800-acre farms and generations of young men and women leave for something more economically sustainable, that way of life is slipping quietly into the past — and the Wisconsin Historical Society Press saw great value in helping to preserve the childhood stories and reflections of a boy from Wisconsin’s Driftless region.

“It is a little bit like having a child, in a very small way,” Jones said of the writing process. “It’s the sort of thing that begins with an idea, and a whole lot of time passes. The child becomes evident before actually becoming present, and then finally there’s a birth of sorts. It wasn’t the sort of thing where I cried from happiness or anything either, but it was just a very satisfying experience.”

Ridge Stories, a memoir 40 years in the making, has stoppered a farm boy’s past in a bottle, rich and full.