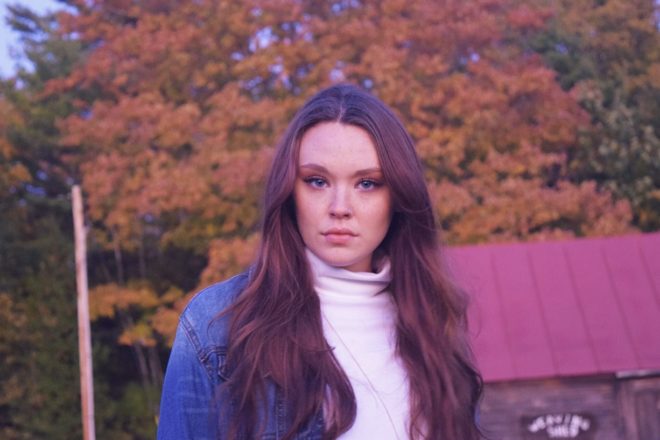 Nineteen-year-old Genevieve Heyward is no stranger to Door County’s music scene. For years she’s been gracing the public with her ultra sultry voice and experienced guitar and piano playing. She’s been a regular performer at Steel Bridge Songfest, and this year she’s back for a fourth. But, even bigger things have been happening for her, and we wanted to talk to her about it.

A little more than a year ago, Heyward released her first full-length album, It’s Not Like Anyone’s Listening. This was a huge milestone in her career. She started landing more gigs and getting looked at with a more professional eye, she said. Having original, tangible material — something that people can take home — gives her legitimacy.

It didn’t happen overnight — the album took four years of songwriting and four months of recording, she said in her featured Facebook video. She also experienced hardships with scheduling and arranging a location to record. Besides the work that was put into creating the album itself, she also had to learn how to use social media as a tool and how to meet new people.

The album was a milestone not only as a musician, but as a person. It was some of the hardest work she’s ever done, she said, and she was young when she did it. The album helped her navigate her high school years and straightened things out in terms of her aspirations after graduating.

“It gave me a clear direction:  I do really want to do music,” she said.

Releasing the album has taken her places. Literally. Heyward has been on tour across states like Ohio, Vermont, Kentucky and New York with “Nashville Cowboy” Mike Wheeler, who also has a handful of gigs in Door County this summer. They’ll play together at this year’s Steel Bridge Songfest, too.

They met there and have written together before. Heyward attended one of his gigs outside Steel Bridge and Wheeler called her on stage for a song — the resulting feedback was good, and they decided they should give performing as a duo a go.

They’ve been touring together since early May, and travelling has been a maturing experience. Heyward said that after multiple nights of not knowing where she might sleep or not having the little luxuries she would if she was home, she’s learned what struggle is when it comes to the music industry.

“I almost enjoy the struggle a little bit,” Heyward said. “It makes me want to work harder.”

She’s also learned how to swallow her fears and take risks. For her it’s nice to meet new people and to visit little towns that she never would have otherwise.

In the time since Heyward’s released the album her songwriting has been changing. She’s discovered that the older she gets, the more personal her writing becomes. Experiencing more from life as a 19-year-old than what you would as a 15-year-old has been giving her some more depth.

In all, Heyward’s grown up in more ways than one. While most kids her age just finished their first year of college, she’s finishing her first tour as a working musician with a full-length album in tow. At this time, she’s not sure about future plans regarding school. She’s going with the flow, she said, and enjoying the lifestyle of a touring musician.

“For right now, music is the ultimate goal,” she said.

See Genevieve Heyward perform at Steel Bridge Songfest this weekend, June 14-17. If not then, check genevieveheyward.com for a list of her other summer dates.