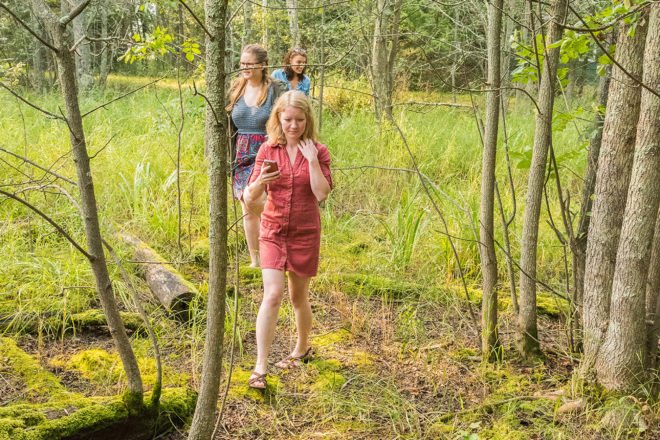 (Front to back) Alyssa Skiba, Grace Johnson and Anna Mae Beyer search for a cache in the woods of Baileys Harbor. Photo by Len Villano.

What do national security, black-eyed peas, George of the Jungle and $4 have in common?

All played a role in the global introduction of the modern treasure hunt movement known as geocaching.

Geocaching is a recreational activity in which participants use geographical coordinates to hide and seek containers (called “geocaches” or “caches” for short) that contain a logbook and often, trinkets for trading.

It was invented in May of 2000, just two days after then-President Bill Clinton announced that the U.S. government would discontinue its use of Selective Availability (what GPS.gov describes as the “intentional degradation of public GPS signals implemented for national security reasons”). Instantly, the accuracy of GPS technology improved and in that very American way, thousands of people began dreaming of possibilities.

One of those was Dave Ulmer, an Oregon man who, on May 3, 2000, hid what would become the first geocache:  a black five-gallon bucket filled with a logbook, pencil, George of the Jungle VHS, a biography on ’90s presidential candidate Ross Perot, DeLorme Topo USA software, a can of black-eyed peas, slingshot handle, four dollar bills and a tape recorder.

He shared his plan, dubbed “The Great American GPS Stash Hunt,” with an internet GPS users’ group. His message was simple:

Make your own stash in a unique location, put in some stuff and a log book. Post the location on the internet. Soon we will have thousands of stashes all over the world to go searching for. Have Fun!!

Within three days of placing his “stash” in the woods of Beavercreek, Oregon, and posting the coordinates online, two people had found it and shared their experiences.

The combination of the great outdoors, a treasure hunt and technology created a domino effect. Within months of that first hide, online communities were formed for the new hobby and the illegal sounding term “stash” was replaced with one that perfectly illustrated what it was all about:  geo (for “Earth”) plus cache (for “hiding place”).

On September 2, 2000, Geocaching.com was launched as a one-stop shop for the geocaching community to post coordinates and learn more about a recreational activity that was quickly gaining traction with outdoor and gaming enthusiasts alike.

At the time of Geocaching.com’s launch, just 75 known caches existed in the world. Today, more than 2.8 million geocaches are registered with the site, including hundreds in Door County. 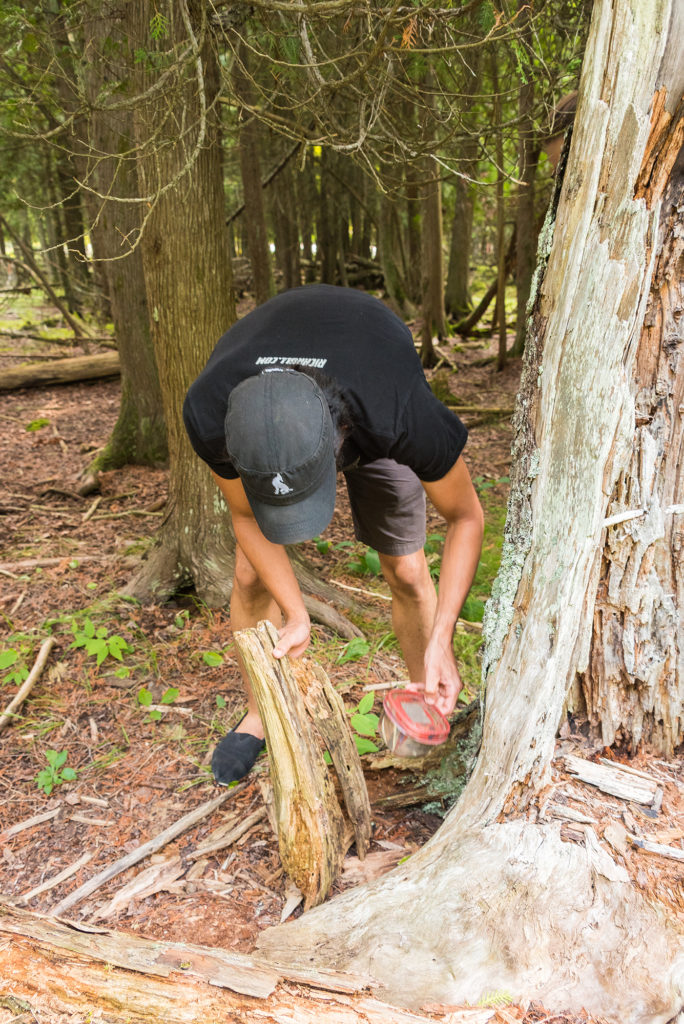 The Ins and Outs of Geocaching

Part of geocaching’s appeal is its accessibility. It requires few things — a GPS device and good walking shoes, along with access to a cache-listing site, many of which are free and come in app form for mobile devices.

Geocaching.com is the premier website for geocachers, but NaviCache, TerraCaching, GPSGames and EarthCache have also been rated by Top Ten Reviews as some of the best and most popular geocaching websites.

Once you have created an account, the possibilities are ever expanding. Just search the database for a local cache, enter the coordinates into your GPS, and you can be on your way to being bitten by the geocache bug. The last step is more of a guarantee than anything else, if you ask Door County resident and geocaching enthusiast Amy Hanson.

Since being introduced to the modern-day treasure hunt four years ago, Hanson has found more than 480 caches across the United States. But even she admits to feelings of trepidation the first time she headed into the woods with a GPS and a friend of a friend who she didn’t know very well.

“There was sort of snow on the ground and it was out in the middle of the woods. I’m thinking, okay, he’s got me hiking out into the middle of the woods. I don’t know that much about Oshkosh, I don’t really know where I am. What is going on? This is kind of weird,” Hanson recalled. “All of a sudden the GPS lined up and showed me where I was supposed to be, and we looked down and there was a big Tupperware container hidden inside of an old, dead log. I thought, wow, this is a real thing [laughs].”

“I was pretty much hooked right away,” she added.

Since then, geocaching has either dictated her travels (day trips to Upper Michigan and Ripon among them) or been a necessary part of them. With searching at the forefront of her mind anytime she heads out of town, Hanson has been introduced to the many layers of geocaching. 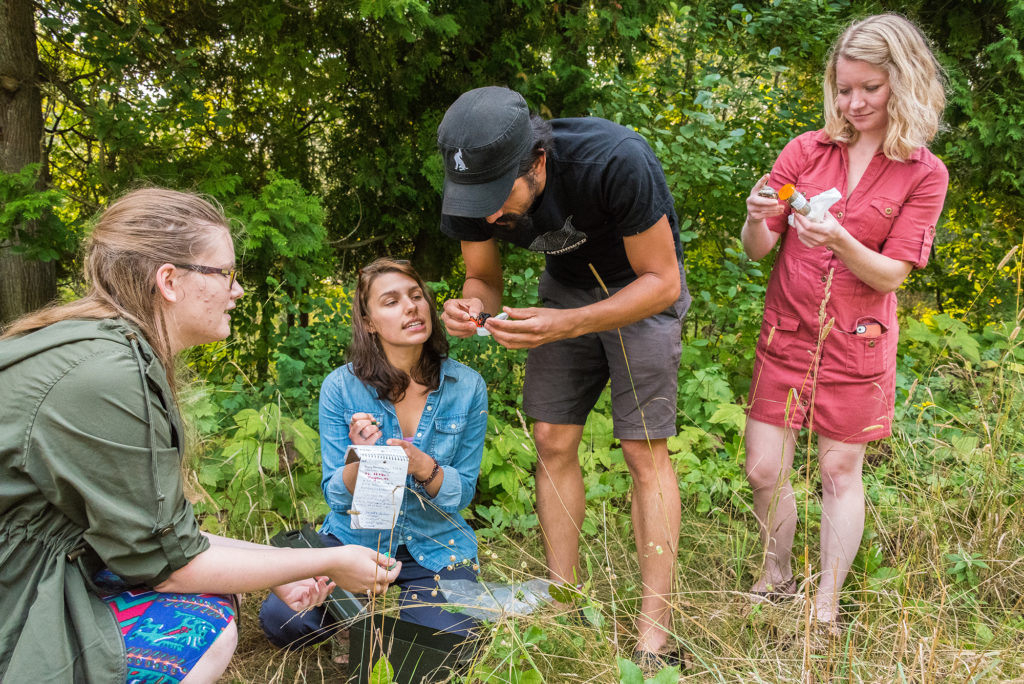 There are more than a dozen types of geocaches, each a different variation on the game (puzzles, geological features and multiple locations among them). The most easily accessible is a traditional cache — a container with a logbook located at the given coordinates.

But traditional doesn’t have to be boring, as evidenced in Hanson’s tale of her most interesting find to date:  an infant coffin cache that she found with a group in an abandoned North Carolina coffin factory.

“Every cache will put on there whether it’s handicap accessible, whether it’s child friendly, if you need to watch for snakes or spiders or if tree climbing is necessary,” Hanson said. “I’ve seen one where you actually need scuba gear and it’s tied to a rock that is sunk in the middle of the lake and you’ve got to go down and find it.”

“Sometimes the cache is a very strange object. I’ve found them on fences where the cache is actually a bolt that is hollowed out on the inside and stuck somewhere on a fence with lots of other bolts. It’s painted the same color as everything else and you just have to go around and touch everything until you find the one that doesn’t belong,” Hanson said.

When you find a cache, it’s like Forrest Gump’s mama said:  you never know what you’re gonna get. Some people leave dollars, others trinkets, and every once in a while, something unique, like the stainless steel soap bar Hanson kept from one.

There is also a chance you’ll find something called a Trackable — a physical “geocaching game piece” etched with a unique code that can be used to log the Trackable’s movements as it travels throughout the world.

When you find a cache, there are just three guidelines to follow:  never take everything out of it; if you take something, leave something of equal or greater value; and do not take a picture of the cache and post it online.

Once you’ve found the cache and located its log, write down your name and the date, trade your trinkets for the ones within, and put it back the way you found it. When you’re all finished with the physical geocache, sign onto your geocaching account, log the geocache and write a note on your experience. 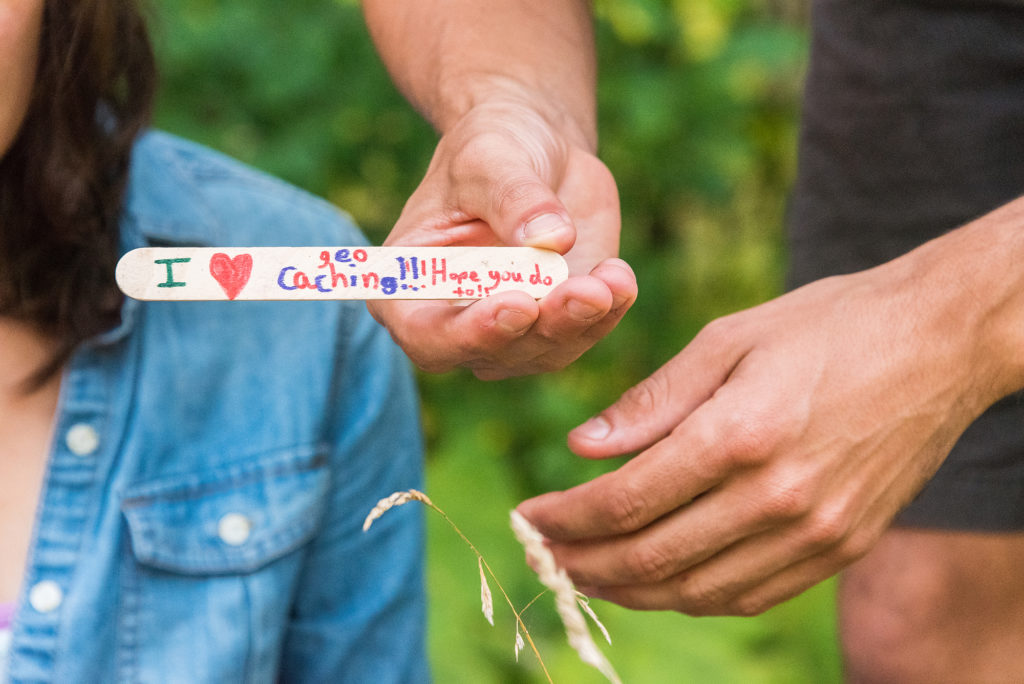 It didn’t take long before Hanson was introducing her own family to the activity. In 2013, Amy and her mom, Lynn, created their first cache and hid it on the bay side of Door County, near “a cute park in a small town.”

Geocaching.com includes a list of requirements and guidelines for hiding a cache, and Hanson also has her own recommendations:

Most importantly, help introduce your town’s visitors to something new.

“Here’s a way you can be out looking at your cellphone all day and be outside walking around and finding neat things,” Hanson said. “Definitely it takes you into nature. I’ve seen more fish and turtles and bugs and spiders and things that I ordinarily wouldn’t see at home because we got out and went hiking through the woods. It’ll take you to a part of town that you wouldn’t normally go to and you’ll see different businesses, different people, different culture.”