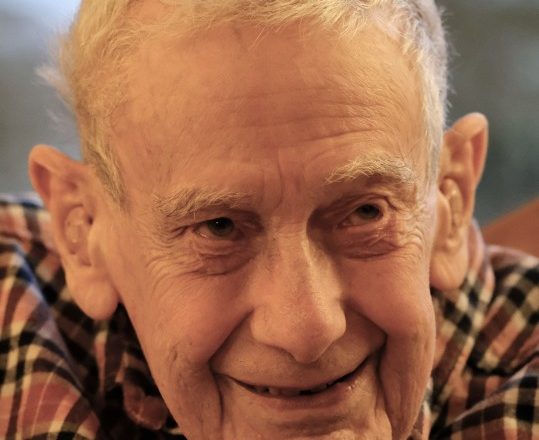 George was born Sept. 9, 1923 in Hiawatha, KS, the son of George and Janet (Daniels) Pinney. During his teen years, his family moved to Sturgeon Bay, where he graduated from Sturgeon Bay High School. It was also there that George met his future wife, Helen Charney, at Leathem Smith Shipbuilding where they were both employed during World War II. They were married on June 30, 1944 at the Sister Bay Moravian Church and lived in Madison, WI, Marinette WI, and Chicago, IL before establishing their home in Park Ridge, IL where they raised their children. George earned a bachelor’s degree from the University of Wisconsin-Madison and spent the majority of his professional life as a chemical engineer for National Cylinder Gas, Chemetron, and Liquid Air, retiring in 1994. He was a faithful member of First United Methodist Church of Park Ridge for many years and enjoyed volunteering with the Boy Scouts. After Helen’s death in 2011, George decided to move to Clark Lindsey Village in Urbana in 2013. He relished the many new friendships which he found both there and at First United Methodist Church of Champaign.

George was known for his friendliness, his sense of humor, and his pragmatic can-do attitude. A lifelong voracious reader, he was a storehouse of information on a wide range of subjects and would often recite verse, both serious and silly, from memory.

He was preceded in death by his parents; wife; and four siblings, Mary, James, Janet and Ruth.

A memorial service was held at 2:00 p.m. on Saturday, September 8, 2018 at First United Methodist Church in Champaign. Visitation was held at the church from 1:00 p.m. until the time of service. Renner-Wikoff Chapel & Crematory in Urbana, IL assisted with Illinois service arrangements. Condolences may be offered at www.renner-wikoffchapel.com.

Memorial donations in honor of George may be made to any public library.

Expressions of sympathy, memories, and photos of George may be shared with his family through his tribute page at www.huehnsfuneralhome.com.