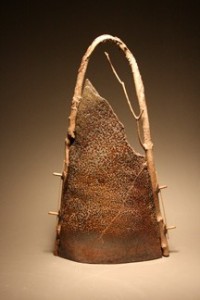 George Ouimette doesn’t call himself an artist. “I make things,” he says. His home studio on a quiet country road in Forestville is the birthplace of his sculptural vessels, combinations of wood and clay forms. A shelf in the studio holds other natural objects, such as a collection of perfect, tiny horsehair bird nests, courtesy of his daughter’s two horses who graze in the field outside his door. Ouimette’s process is simple: “I pretty much always find a stick, and build a pot around it.”

The resulting work strikes a beautiful balance between form and function, wood and clay, shape and emptiness. His pieces, with names like ‘Full Moon Rising,’ ‘Attitude’ and ‘Budding Kimono’ suggest natural shapes such as mountains and a celestial orbs, as well as human forms cloaked in flowing clothing. To Ouimette, the work evokes a variety of responses. “They make me think of things. Of people, of places, of feelings.”

The day I visited him, we kicked around the studio for a while, and then took a late afternoon walk through the spectacular autumn woods on a ridge above the home he shares with his wife Diane and two Australian Shepherds, Aussie and Olivia. As we meandered the path up the hill, dogs charging ahead, he stopped and considered broken branches and fallen tree limbs. He didn’t pick anything up, though.

“A few years ago I realized that I was focusing so much on finding wood that I wasn’t enjoying my walks anymore. So I’m trying to find the balance” he says, then tells me a story about his daughter tobogganing down a particularly steep hill at age three. “When we tipped, all I could see was her boot sticking out of the snow. That wasn’t my best judgment moment as a parent,” he laughs. His mellow demeanor and warm smile make it clear that his art is part of his life, but doesn’t dictate it. 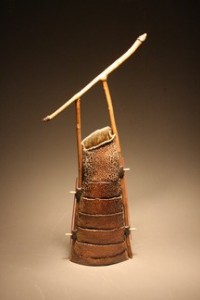 Ouimette loves wood. In addition to a full time position as a high school art teacher at Southern Door School, he takes on odd carpentry jobs and builds theatre sets. He’s also drawn to surfaces, which is evident in the varying textures of his work – from shiny peeled branches, to rough, dramatic cuts of wood resulting from lightning strikes, to the highly varied surfaces of his pottery. “Lately, I’ve been working with salt firing,” he explains. “I was introduced to it by another potter, Keith Carter of Clay on Steele. We throw the salt into the firebox, and it vaporizes. I like the randomness of it.” Ouimette also uses wood firing, in which ash settles on pottery in shadows that mimic the richness of wood.

Ouimette’s pots are constructed, not thrown, in a form he calls “slab coil pinch-pots.” He rolls out a slab of clay, cuts strips, and then coils and pinches them to create his forms that complement, contain or constrain the natural wood pieces that inspire them.

Art was “around” as Ouimette was growing up. His father graduated college at age 35, and studied art for a while before he was discouraged by his teachers. “I remember picking up one of the books he had from a mail-order course, called the Famous Artist Course, and thinking ‘I can do this.’ And I did.”

Ouimette and his brother were always making things out of objects they found outdoors, and eventually he found himself pursuing an art degree at the University of Wisconsin – River Falls. “There was a lot going on there then – pottery, a fibers studio, a glass studio.” Ouimette himself worked in printing and drawing until he discovered pottery his junior year. “Gradually the pottery took over,” he says, “but I still consider myself a multi-media person.”

Ouimette came to Door County in 1983, and has worked with other Southern Door/Algoma potters such as Mark Kolinski and Ellen Levenhagen, sharing kilns and firing together. Although he’s happy to be part of a community of potters, he doesn’t allow for much influence. “I’ve got a system for making my work, and no one else has it,” he says. 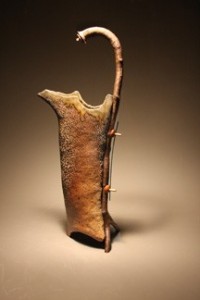 Recently, Ouimette was invited to show his work at the prestigious Karla Little Fine Furnishings Show in Milwaukee. “I didn’t sell anything,” he reports sanguinely. “But I’m told that people who attend will sometimes contact you afterwards.” He’s not holding his breath. In fact, Ouimette has a hard time parting with his work.

“When I was five years old, on my first day of kindergarten, I made a strand necklace out of colorful wooden beads,” he recalls. “I was in the line to go home and the teacher told me I couldn’t take it home with me. I won’t even tell you what I was thinking. I was pretty upset.”

Perhaps Ouimette’s attachment to his work stems from those walks in the woods where he discovers the wood, or from the long hours in the studio forming the pots, or from the serendipitous process of salt or wood firing. Whatever the reason, it hasn’t stopped collectors near and far from purchasing his art.

His latest exhibition runs through late November at the Barnsite Art Gallery in Kewaunee. It features his large sculptural vessels as well as the traditional and experimental clay work of Keith Carter and oil portraits by painter Pam Clausen. Although the Barnsite does not have regular hours, private or group showings are available by contacting Keith Carter at 816.550.2022 or via email at [email protected].

To learn more about Ouimette and his work, visit ouimettestudio.com.