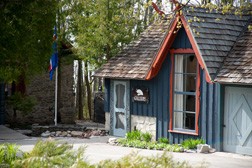 In the late 1930s, Gerhard C.F. Miller’s first wife, Edna, opened a small shop behind their home on North Bay Shore Drive in Sturgeon Bay to sell Norwegian arts and crafts. The shop closed when World War II made it impossible to obtain merchandise from Europe. Edna died in the 1956.

A half-century ago, Door County wasn’t the haven for artists it is today. After the war, when Gerhard and his second wife, Ruth, reopened the little cottage in 1958 as what is generally accepted as being the first art gallery in the county, it was a new venture. As Gerhard’s fame spread – even including an exhibit at the Metropolitan Museum of Art in New York City – the gallery held a treasure trove of his work. He continued to paint and to keep the gallery open until his death at 100 in 2003.

A final request to his daughter, Margaret Utzinger, was that she keep the gallery open for at least three more summers. She has gone far beyond that, coming from her home in California each year to honor her father’s wishes. Last summer, her son and daughter-in-law, David and Kathryn Utzinger, maintained the gallery, but have since settled in California, where David is pursuing a Ph.D. in classical conducting at UCLA.

This summer, the gallery’s last, Margaret opens it by appointment. There is just one of Gerhard’s original paintings left for sale – a watercolor of a fishing tug at a dock – along with six framed giglée prints and many unframed prints and drawings. It’s the end of an era that began decades ago, when young men like Chick Peterson, Jim Ingwersen and Tom Seagard came to talk to Gerhard to ask if he thought it was possible for a painter to make a living in Door County.