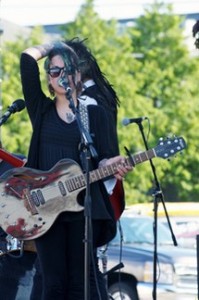 Geri X possesses a clear, rich voice – sweet, haunting, and sharp as nails all at once. The musician, a regular performer at Steel Bridge Song Fest and The Holiday Music Motel, returns to Sturgeon Bay to perform an intimate studio concert on March 28 and 29.

I spoke with the young prolific songwriter, who is currently touring the U.S. and working on her sixth album, about her gorgeous voice, hard-to-label sound, and why she keeps returning to Sturgeon Bay.

Sally Slattery (SS): Your voice is memorizing, unique. When did you realize you could sing?

Geri X (GX): I can’t really recall when I realized I could sing, but I do specifically remember when I told my parents I wanted to be a singer when I grow up. It was when I was 13. It didn’t go very well at first but I think after the first few open mics I played my original songs my mom really understood how important it was to me and how much potential I really had to have a career.

SS: Was there anyone in particular who influenced your passion for music?

GX: I always just had a lot of connection to music. It sort of fixed what was wrong with my mood and my head at any given moment of emotional crisis. In recent years, I am mostly motivated and influenced by my friends who work hard and have successful careers and support each other.

SS: You return to Sturgeon Bay often for Steel Bridge Song Fest and solo performances. What keeps you coming back?

GX: I love being in Sturgeon Bay. I still return every year, even a few times a year due to pat mAcdonald and the Holiday Music Motel and Steel Bridge Song Festival that kind of always draw me back into the bay. It’s like being at home on a different planet. Sort of a really fantastic imaginary world.

SS: I have a hard time defining your genre. Do you see yourself in a specific genre?

GX: Oh gosh, my guess is as good as yours. I have no idea what I write, I just write what I feel and the mood and genre finds its own way to where it needs to be. I say indie blues rock, others say day pop rock, others say singer/songwriter. To me, it’s just my music.

SS: What are you trying to communicate through your music?

SS: What’s next for you?

GX: Tour all year. So frankly, living in a van and driving in circles around the country. A vacation would be amazing, but I still have a lot of work to do to get some legs under this record.

To learn more about Geri X and her music, visit gerixmusic.com.